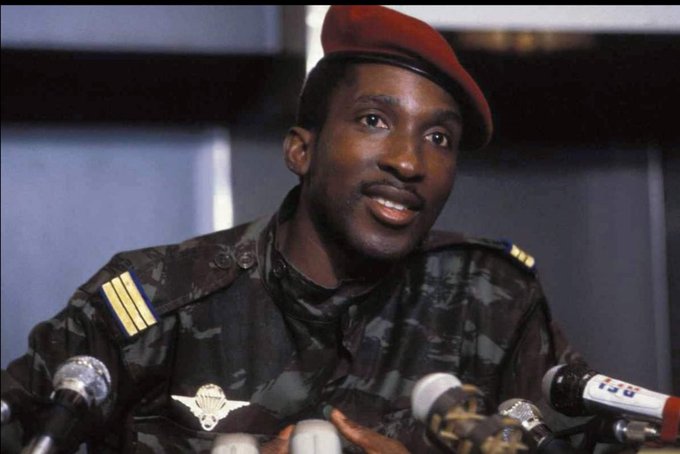 Fourteen men including former president Blaise Compaoré are currently on trials for the assassination of Thomas Sankara. Sankara was assassinated 34 years ago in Burkina Faso. The late Burkinabé president was the country’s most revered revolutionary leader. The Daily Vox team took a look at ten things you need to know about Sankara.

Sakara was killed in 1987 during a coup that was led by his close ally, Compaoré. Compaoré became president of Burkina Faso and ruled for almost thirty years. He was ousted in 2014 and fled to the Ivory Coast. In April 2021 he was charged in absentia for being complicit in Sankara’s killing. He snubbed the trial and denied any involvement in the assasination. The Compaoré regime had been accused of preventing a trial from taking place for decades. His ousting paved the way for justice to take place.The other 12 accused have pleaded not guilty.

Sankara’s widow, Mariam Sankara said the trial will bring much needed closure for her. Others died on that day too, and their families deserve answers too, she said.

In 1983, Sankara ascended to the presidency of Burkina Faso, after a successful coup d’etat. A year later, he renamed the country Burkina Faso.This means “the land of upright people” in Moré and Dyula; two dominant languages in the country. It was previously known as the Republic of Upper Volta, a colonial name given by French colonists. He also designed the new country flag and composed a new national anthem, Une Seule Nuit.

At the beginning of Sankara’s presidency he launched a mass vaccination programme. Between 1983 and 1985 over two million Burkinabé were vaccinated against polio, measles, yellow fever and meningitis. This included one million children.What made it extraordinary was that it was completed in three weeks. In 198,0 the United Nations Children’s Fund (UNICEF) reported that between 18000 and 50000 children died from these diseases. Sankara’s proactive approach was life-saving. Its success was also attributed to intensive education and mobilised medical personnel.

“Colonialism has pillaged our forests without the least thought of replenishing them for our tomorrows.’ Sankara said.

Sankara was committed to gender equality. He introduced special literacy classes for women and maternity training in rural areas. Sankara appointed women in leadership positions in his cabinet. He decreed that girls who fell pregnant must remain in school. He outlawed female genital mutilation, and forced marriages. Polgamy was outlawed and windows could inherit their marital estate.

“The revolution cannot triumph without the emancipation of women” Sankara on International Women’s Day, March 8, 1987

He was a frugal president

He made the cheapest car sold in Burkina Faso (Renault 5) the official service car for ministers. First class airline tickets and government chauffeurs were forbidden. He reduced his own salary and that of public servants. They also had to pay one month’s salary to a public project. Sankara famously limited his possessions to a car, four bikes, three guitars, a refrigerator, and a broken freezer.

“The one who feeds you usually imposes his will upon you.” Sankara at the summit of the Organization of African Unity in July 1987.

Sankara believed Burkina Faso could sustain itself without foreign aid. He refused aid packages from the International Monetary Fund. Sankara also tried to persuade other African countries to refuse to pay financial debts to their former colonisers. He said the debt goes back to colonialism, and that Africa is not responsible to pay it back.

He is not Che Guevara

Thomas Sankara is often referred to as  “Africa’s Che Guevara”. His legacy is that of Thomas Sankara. A person who had his own agency and ideals. This is not America’s next top revolutionary leader. He stood in his beliefs and actions as Thomas. This is not a contest, and he was not a version of someone else. He was Thomas Sankara of Burkina Faso.