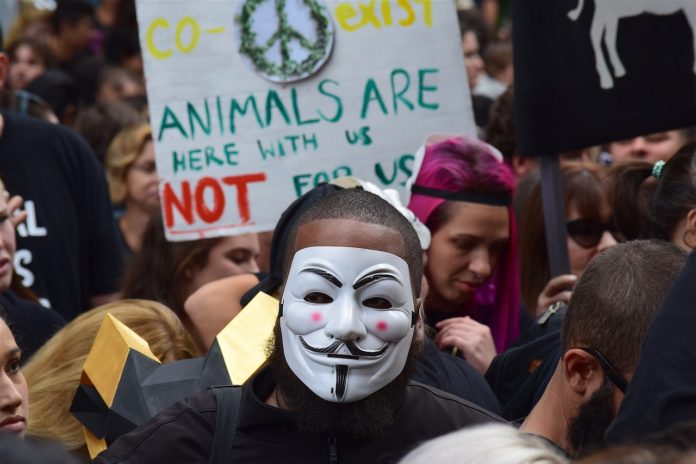 Haters aside, the vegan movement has exploded so much over the past few years it’s almost mainstream. Interest in the plant-based lifestyle is as high as it’s ever been. Heck, even The Economist named 2019 the Year of the Vegan. South Africans are not excluded from this interest in veganism. Google Trends shows that interest in veganism in South Africa is at its highest level ever.

Food blog Chef’s Pencil analysed interest in veganism on Google Trends. This data shows South Africa as one of the top 30 countries world-wide where veganism was the most popular over the past 12 months. Ranking in 23rd place, South Africa is the only African country with a sizable vegan following. But before veganism gained traction in South Africa and the world, here are famous historical figures you’ll be surprised to know were/are vegetarian/vegan.

Now I know what you’re thinking, you did NOT learn this in math class. But besides his work on calculating triangles, Pythagoras adhered to the teachings of Buddha, who was his contemporary, who inspired him to practice non-violent vegetarianism. Pythagoras believed that abstaining from meat was part of his spiritual values. Until 1944 when Donald Watson coined the term “vegan”, a plant-based diet was actually called a “Pythagorean” diet.

Greek philosopher Plato, who was influenced by Pythagorean concepts, also likely followed this diet. Plato said: “The gods created certain kinds of beings to replenish our bodies. … They are the trees and the plants and the seeds.” In The Republic, Plato’s character Socrates says that the ideal city was a vegetarian city because meat was a luxury leading to decadence and war.

Circumstantial evidence shows that Da Vinci followed a vegetarian diet. The Renaissance man was famously against animal cruelty and a couple of his biographers have referred to him as vegetarian. On farm animals, Da Vinci wrote: “Endless multitudes of these will have their little children taken from them ripped open and flayed and most barbarously quartered.”

Little Women author Louisa May Alcott was raised vegan before the word existed. Her father Amos Bronson Alcott turned to the lifestyle after reading Pythagoras and attending a series of health reformer Sylvester Graham’s lectures on the “Science of Life.” For a short while, the Alcotts even lived in the communal environment of Fruitlands. There, not only did they eschew meat, but also didn’t use dairy products, wool, leather, or cotton (as a product of slavery).

In the last few years of his life, Albert Einstein followed a vegetarian lifestyle. The scientist suffered chronic digestive distress and a doctor prescribed that he eat a balanced diet of meat and simple carbohydrates. “I have always eaten animal flesh with a somewhat guilty conscience,” he once wrote in a letter. Later, his health worsened and he was advised to cut meat from his diet. Einstein wrote, “I am living without fats, without meat, without fish, but am feeling quite well this way.” Unfortunately, his diet couldn’t save him at that point and he died a year later.

Civil rights activist Rosa Parks is written into the history books as the woman who refused to give up her bus seat. But Parks was a vegetarian for over 40 years too. In the book Positive Energy, author Dr Judith Orloff includes an interview with Parks in which she says: “For over forty years, I’ve been a vegetarian. Growing up, my family had little money—I had health problems early in life because of poor nutrition. Eating healthy is a priority for me.”

Why Your Veganism Must Be Intersectional

Civil rights activist Coretta Scott King championed the rights of people of colour, women, the LGBT community, and even animals. In the last 10 years of her life, Martin Luther King Jr’s widow went vegan. Their son Dexter Scott was vegan and convinced his mother to adopt the lifestyle. She said veganism was “the next logical extension of Martin Luther King, Jr.’s philosophy of non-violence.”

Indian activist Mohandes Gandhi wrote extensively about compassion for animals. As a practising Hindu, the Indian activist grew up vegetarian. Later in his life, he quit dairy and eggs too. Gandhi once said, “I do feel that spiritual progress does demand at some stage that we should cease to kill our fellow creatures for the satisfaction of our bodily wants.”

American writer Alice Walker said: “If I’m eating food I know was a creature in a cage, it brings up memories of segregation and the stories from my ancestors, of being in captivity and denied their personalities, their true beings. Animals were not made for us, or our use. They have their own use, which is just being who they are.” The Color Purple author was vegan for a while, but now eats eggs and fish.

Black radical feminist and member of the Black Pather party Angela Davis has recently become vocal about her veganism. During the discussion “On Revolution: A Conversation Between Grace Lee Boggs and Angela Davis” in 2012, Davis says “I usually don’t mention that I’m vegan but that has evolved… I think it’s the right moment to talk about it because it is part of a revolutionary perspective – how can we not only discover more compassionate relations with human beings but how can we develop compassionate relations with the other creatures with whom we share this planet and that would mean challenging the whole capitalist industrial form of food production?”

That same year, at a Social Justice Teach-In at UC Davis, Davis said: “The food we eat masks so much cruelty. The fact that we can sit down and eat a piece of chicken without thinking about the horrendous conditions under which chickens are industrially bred in this country is a sign of the dangers of capitalism, how capitalism has colonised our minds. The fact that we look no further than the commodity itself, the fact that we refuse to understand the relationships that underlie the commodities that we use on a daily basis. And so food is like that.”

There you have it, living a plant-based lifestyle is not as new as it seems.