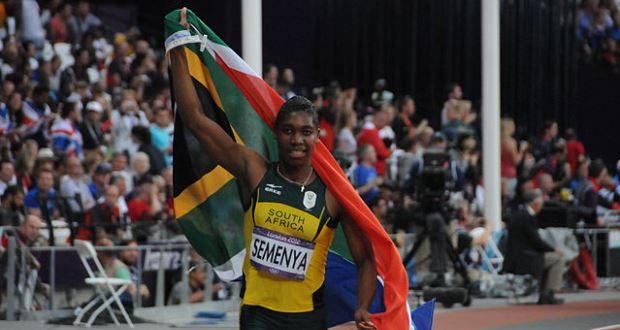 One of the biggest events in the sporting world, The Rio Olympics 2016, is just months away and athletes are hard at work preparing for the summer games. While all of Team SA’s spots have not yet been filled, FATIMA MOOSA rounds up ten sportswomen who are headed to the Games to represent in the green and gold.

1. Banyana Banyana
“The Girls” is the nickname for South Africaâ€™s womenâ€™s football team who have qualified for the 2016 Olympic Games. They qualified last October after defeating Equatorial Guinea in the second leg of their clash. This is the second time they qualified for the Olympics, the first being in 2012. Banyana have not been playing for that long but they have been runners-up in the African Championships four times. They are currently hard at work preparing for the Olympic Games at the Nike Football Training Centre in Soweto, led by coach, Vera Pauw. The teamâ€™s most successful player, Portia Modise, is also their most capped. All eyes will be on The Girls at the Games to see if they can continue to carry the flag of Team SA high.

2. Sunette Viljoen
Viljoen will be taking her place at the 2016 Olympics as Team South Africaâ€™s javelin thrower. Sunette may have qualified for the games but her place in Team SA is uncertain after her public remarks about the way the South African Sports Confederation and Olympic Committee (Sascoc) treats its athletes. Even though ViljoenÂ is one of South Africaâ€™s best javelin throwers at the moment, she had to choose between cricket and athletics, being brilliant in both. She chose javelin and has won many accolades at the African Championships and Commonwealth Games, including placing fourth at the 2012 Olympics. It will be interesting to see if Sunette makes it to the Olympics and how she fares.

I'm not competing to win medals for Sascoc. I compete out of passion and for my country. They have never supported us like they should have.

3. Caster Semenya
Semenya will be running the 800m sprint for Team SA during the 2016 Olympic Games. She is the current holder of the silver Olympic medal from the 2012 Games and also carried the South African flag during the opening ceremony. Semenya made news around the world in 2009 when, after winning the 800m sprint at the World Championships in record time, the IAAF (International Association of Athletics Federations) asked her to take a gender test. After months of controversy in the way the IAAF and others handled the case, Semenya returned to the athletics arena in 2010, once again breaking records and collecting medals. Semenya has us looking forward to the games as she is one of Team SAâ€™s best hopes for bringing home a medal.

4. Carina Horn
Horn is one of South Africaâ€™s fastest 100m sprinters and has qualified to represent South Africa at the 2016 Olympics in the 100m sprint. Horn runs the 60m as well but has qualified for the 100m for the Games. She is ranked 19th in the world 100m and is also the joint SA record-holder of 11.06 seconds with Evette de Klerk. Even though Horn represents South Africa, she is based in Austria. She will be back in SA for nationals in April which is practice for the Games.

5. Dominique Scott
Scott is a long distance runner from South Africa who practises her sport in America for the University of Arkansas Razorbacks. She will be representing Team SA in the 10 000m race at the Olympic Games. Scott is one of South Africaâ€™s fastest middle distance runners and, despite having never participated in any major championship, it is expected that she is going to really make a difference at this yearâ€™s Games. Scott is not only a star athlete but she also graduated last year with a degree in marketing from the University of Arkansas.

6. Wenda Nel
Nel is South Africaâ€™s representative for the 400m hurdle. Her personal best is 54.37 seconds and her highest honour was gold at last yearâ€™s African Championships. Nel has represented South Africa since 2005. In order to improve her times and ensure she makes it to finals at the Games this year, Nel has started training with a competitor from Denmark. With the Games coming up in August,Â she’s got her work cut out for her.

7. Ursula Grobler and Kirsten Mccan
These two womenÂ make up Team SAâ€™s rowing team for the 2016 Olympics. They are likely toÂ be representing South Africa in the lightweight women’s double sculls. The pair qualified for the Olympics after coming second in their semi-final against Canada at the World Championships last year. They also received a bronze medal at the Championships. Grobler and Mccann are a remarkable pair who were nominated last year for Team of the Year at last yearâ€™s SA Sports Awards. If they race at the Olympics, they will be a pair to look out for, especially considering they are the first SA womenâ€™s crew to win a medal at a championship. However, it is not a sure thing that the pair will be the ones racing at the Olympics, as national rowing coach, Roger BarrowÂ said that there is no guarantee that the rowers who qualify the boats for the Olympics will be the rowers competing at the Olympics. Rowing sounds pretty complicated, but we hope we get to see these ladies shine!

8. Tanya Seymour
Seymour is a dressage rider and will be representing Team SA in the equestrian section of the Olympic Games. Seymour secured her place at the games by coming fourth in a special Olympic qualifier that took place last year in Germany. Seymour is 18th on the world ranking. She lives in Germany where she practises her sport, but she does compete under the South African flag.

9. Justine Palframan
Palframan will be representing South Africa in the Olympics for the 400m sprint, although she does run both the 400m and 200m. Palframanâ€™s best record is gold at the 2015 Summer Universiade and she has also represented South Africa at the African Championships. Despite being only 22 years old, Justine Palframan has won 9 gold medals while representing South Africa, making her one of the young athletes to watch out for. Palframan is both an excellent athlete and swimmer but she quit swimming so as to concentrate on athletics.

10. Bridgitte Hartley
Hartley, who is an Olympic medallist (she got a bronze medal at the last Games) is representing South Africa at the Games in womenâ€™s kayaking. Hartley has an impressive record in the kayaking field, being the first South African and African to medal at the ICF Canoe Sprint World Championships. She won a bronze medal. She was also nominated for Sportswomen of the year at last yearâ€™s SA Sports Awards. Hartley qualified for the Games after last yearâ€™s World Championships in Milan.