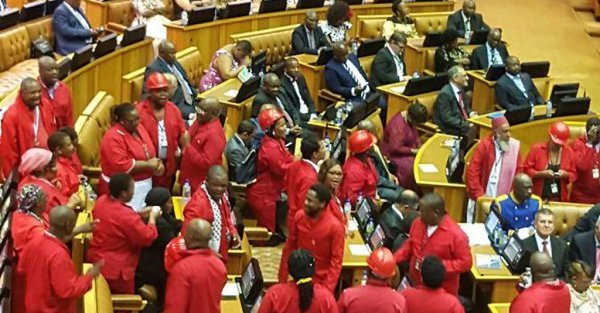 Since 2015, the State of the Nation Address has become an event marked by drama and plenty of crazy antics to look out for. AAISHA DADI PATEL rounds up the ten most ridiculous moments that had us tweeting flame emojis during #SONA2016.

The proceedings had barely begun at 7:13pm. As the speaker of the House Baleka Mbete began to introduce the president, the Economic Freedom Fighters (EFF) were already trying to raise points of order. Her patience was obviously running thin as she remembered the events of last year, Mbete had no qualms about threatening to throw the EFF out, and told Malema to take a seat.

When President Zuma tried to begin his address, EFF Commander-in-chief Julius Malema brought up the label he first used at his presser last week and curtly said to Zuma, “Sit down Mr Zupta.”

3. Mosiuoa Lekota and COPE’s revival from the ashes

COPE leader Lekota – a voice many were surprised to hear on any platform – tried to bring up the fact that Zuma had broken his presidential oath. “He broke his oath in office. He is no longer honourable. We cannot listen to someone who broke his oath, ” he said.

But Baleka Mbete immediately cut in, telling him “So you are free to leave the Chamber” – which he promptly did.

4. Malema fights over not being called “Honourable Member”

Frustrated at the EFF’s stalling of events, when engaging in a back and forth with Malema, Mbete repeatedly referred to him as “EFF members”. Juju was offended and reminded Mbete to refer to him as “Honourable Member” – and when she did, he gave a cool “thank you.”

5. “Please assist us by not having extended dialogues” – Naledi Pandor

South African Minister of Science and Technology Naledi Pandor, frustrated by the constant hiccups in getting the show on the road, didn’t mince her words and asked Mbete to speed the process along by not engaging unnecessarily.

Not willing to engage with EFF members’ hold up of the proceedings, chairperson of the National Council of Provinces Thandi Modise shut down EFF MP Mbuyiseni Ndlozi, and told him to sit down.

7. EFF MP:” I don’t understand English. Address me in the language I know.”

The above is a very loose translation, but this was what a female MP retorted to Mbete in vernacular when she tried to silence the members.

8. “Honourable Vawda, you are doing very well. Take your seat.”

After Fighter Dr Vawda called Modise to order, saying “you’re making it difficult to continue with the business of the day”, Modise acknowledged his words – and immediately then shut him down.

Of course the EFF’s spokesperson was being patronising about Mbete winning the Martin Luther King Legacy Award for International Service, but it was still really funny.

Malema stood up and began chanting, “Zupta Must Fall”. Soon, other Fighters joined in too, and an hour after the proceedings had officially begun, the EFF made their voluntary exit from Parliament. At least the white-shirts didn’t get their hands on the Fighters this time around.