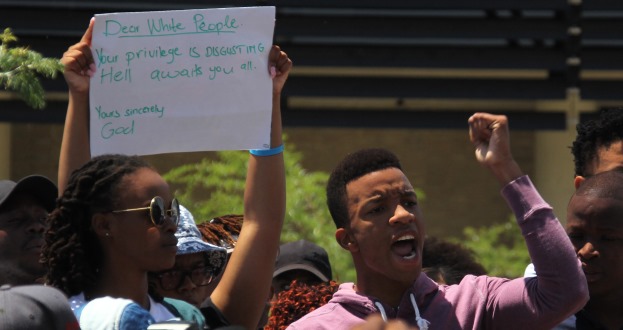 After negotiations between students and management broke down on Thursday, Wits University announced a postponement of Fridayâ€™s scheduled general assembly. Students expressed shock and disappointment at the postponement, but the future of the movement now requires decisive leadership.

According to management, students had presented the other stakeholders at the university with a new demand. â€œOne of the latest demands of the protesting students is that Wits and all other universities should be shut down until the government agrees to free education,â€ the statement said. So, we have some questions for the student leadership.

1. How do you see protracted university shutdowns as resulting in free education? These shutdowns are a means to what end exactly?

2. Quoting from managementâ€™s statement on Friday morning again, â€œThere has been no consensus from all constituencies and no agreement from the protesting students that the academic programme will continue on Monday.â€

The university reopening is the only thing management wants, we all know this. Why are continued shutdowns strategically seen as more valuable than collective university endorsement?

4. Who exactly do you represent? Do you have the mandate from the masses? Have you made any efforts to engage the thousands of people who voted for the resumption of the academic programme?

5. Blade saidÂ that student leaders had agreed to his intervention when wearing their SAUS hats, and then threw him under the bus, when they returned to their constituencies. Among you are students who hold senior positions at SAUS, so what is your response to Blade?

6. Adam Habib has accused you, as protesting students, of orchestrating a â€œpolitical spectacleâ€, at the expense of sincere engagement to resolve the current impasse. How do you respond to this?

There are significant fractures in the student body at Wits, particularly across party political affiliations. SRC representatives, all of them PYA members, continue to be treated with suspicion, especially after their engagements with management and police. We know that you have elected six people across party divides to represent the movement, and have also outlawed party t-shirts in an effort to foster unity. But there continues to be suspicion of PYA affiliates, whom a certain faction believe will sell out the cause. At the same time, weâ€™ve seen the return of Mcebo Dlamini and Vuyani Pambo – the latter of whom had declined a leadership position, and yet, heâ€™s seen leading many a march the last few days.

8. When you speak to management, what exactly are your non-negotiables?

9. How is the goal of free education, with which – make no mistake – we also agree, achievable right now?

11. Indulge us on this one. Who are your handlers in the third force? ðŸ˜œ