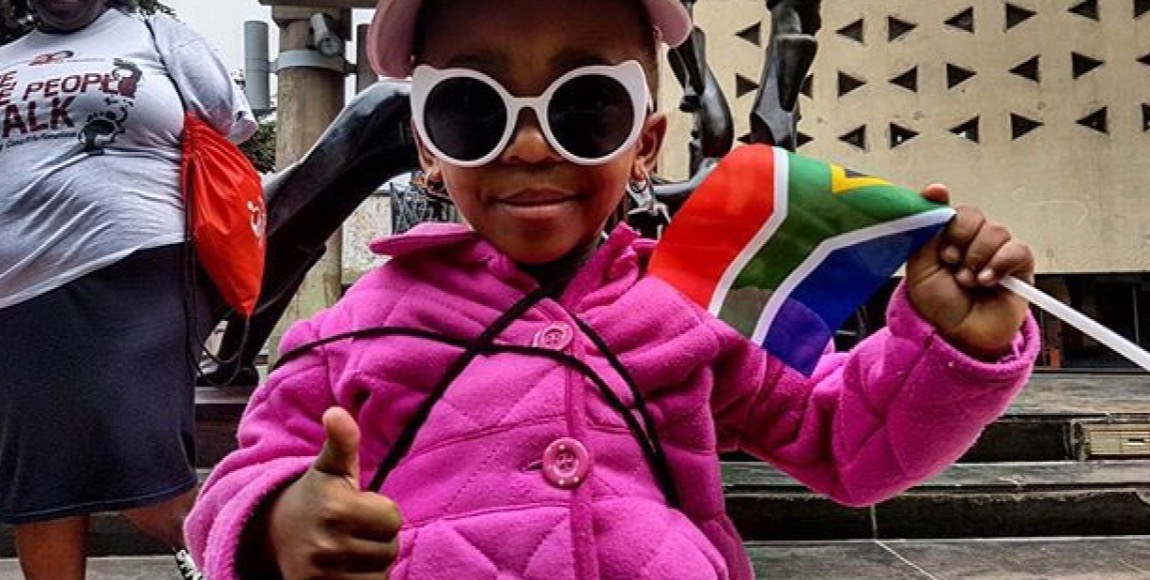 March looked promising – and then nosedived pretty badly towards its end. First Helen Zille defended colonialism, and then the great Uncle Kathy passed. As a cherry on top, President Zuma also decided to reshuffle most of the entire cabinet on the eve of the last day of the month, which sent the rand – and all of our nerves – all over the place. But it wasn’t all gloom and doom, we promise. Here’s the March 2017 edition of ten reasons South Africa doesn’t suck right now.

The conclusion of the first quarter of the year sees many South African tertiary institutions holding their graduation ceremonies for the class of 2016 â€“ and this crop has got a good dose of black excellence. We love to see people shining and thriving. Well done to the graduates!

This one was for the 'rents.

Lufefe Nomjana, the Spinach King, is successfully running his healthy food business in Cape Town’s Khayelitsha, selling fresh juices and smoothies made with spinach. Muffins are R7, sandwiches and smoothies are priced at around R15; and the â€œPopeye Wrapâ€ goes for R30. About his motivation for starting the business, Lumjana says there are a couple of reasons. “Everything was unhealthy â€“ the food, drugs, gangsterism, even the water. I remember a friend of mine having this weird bloated tummy. We thought nothing of it until we later found out that he actually suffered from kwashiorkor, which leads back to nutrition. From then on, I told myself that I wanted to change the environment and myself,â€ he told Destiny Man.

Bianca Basson, Thato Serepedi, Joanne Crowley and Caroline Mignolet killed it in the figure-skating competition at the Special Olympics Winter Games, which took place in Austria in March. Basson took the gold while Mignolet won silver, and Serepedi and Crowley both took bronze in their competitions. Yaaaaas! Team SA also had representatives from speed skating and floor hockey at the Games. Tyrell Skyes took fourth place in figure skating while Kevin Gibbs, another figure skater, took fifth.

4. The cop boogieing her way as she directed traffic

Dorah Mofokeng is no ordinary traffic cop. The Johannesburg Metro Police Officer was captured dancing on video while directing traffic at the intersection of Cedar and Witkoppen Roads in Fourways, and thought she would get fired – not get the positive response that she has. â€œI am not a dancer but when I am directing traffic at a traffic point everyone must be happy. They must know I am hereâ€šâ€ she told Sowetan Live.

Whether they are quickly going shopping or anywhere else they must know there is someone standing there so I put [a] smile on [my] face. Even if they donâ€™t want to smile at least I make sure they smile.â€

We love to see inspirational people get honoured for their hard work and the contributions that they make to society – and we love it especially when women are acknowledged. â€œWoman of Statureâ€™s mission is to empower, educate, upskill, connect and support women, and to offer a platform that helps raise funds for charity. As part of our mission, we host an annual gala dinner to honour those South African women who make a significant contribution to the economy and their respective communities,” says founder Charlotte du Plessis.

It has been a truly empowering journey! An honour to be named 2017 Woman of the Year in Healthcare #SA & thanks @Nedbank, great cash prize! pic.twitter.com/wsMPMkkKUf

Lauded as the biggest health finding since Chris Barnard and Hamilton Naki’s pioneering heart transplant surgery, an all-female team discovered a genetic mutation which is the cause of sudden death in under-35s and athletes, in a discovery that experts say shows the country is “in par with international researchers”.

The team was led by 30-year-old Maryam Fish of Lansdowne, along with Gasnat Shaboodien and Sarah Krause and researchers from Italy.

Nkosingiphile and Simphiwe were born near Pongola on October 8 2016, sharing a liver and pericardium. Doctors decided to wait until they weighed 10kg together before operating on them in late March. A team of 25 surgeons, cardiologists, anaesthetists, theatre sisters and other staff were involved in the operation, which took 13 hours to complete.

The Proteas concluded their tour of New Zealand with a clean sweep, winning the one-off T20 International match followed by a 3-2 victory in the ODI Series and a 1-0 victory in the Test match series.

“We can certainly face the future with a sense of confidence and optimism,â€ said Cricket South Africa CEO Haroon Lorgat.

It wasn't pretty, but we'll take it. Fourth consecutive series win for these men. What a season ? ? ? ? #ProteaFire #NZvSA pic.twitter.com/6Qjr99PuEN

Three South Africans have developed anÂ adhesive tape which allows you to attach LEGO blocks to almost any surface. The product is called Nimuno Loops and recently launched on IndieGogo, where it quickly raised over $1,500 000.

The flexible, LEGO-compatible tape can stickÂ to most surfaces and can be bent, cut, and shaped. It is the creation of South Africans Anine Kirsten and Max Basler, professional industrial designers working for Chrome Cherry Design Studio (CCDS), and their boss and CEO Jaco Kruger.

10. The Holy Trinity Catholic Church is safe space for the LGBTQIA+ refugee community

The Braamfontein church is no stranger to being an inclusive space for marginalised groups, functioning as a safe space and place of refuge during the 2016. And now, it also hosts a support group for lesbian, gay, bisexual, transgender and intersex (LGBTI) African refugees. “The idea of the group was to give a home where people could meet and find some fellowship â€¦ Where we can integrate faith and being gay,â€ says founder Dumisani Dube, the 35-year-old leader of the support group. “That was eight years ago and the space is thriving today.”