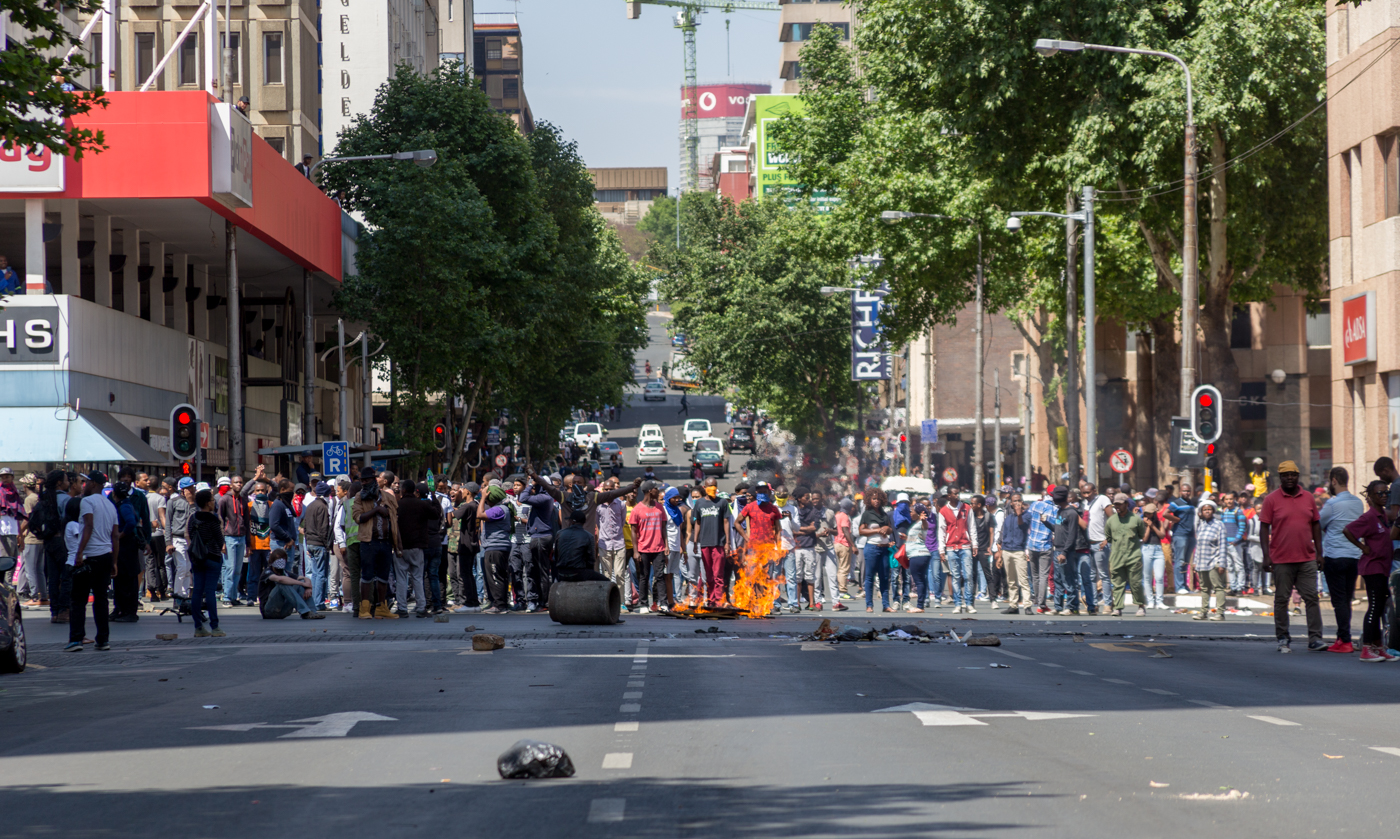 Our understanding of #FeesMustFall demands nuance because the movement is not ubiquitous. The Daily Vox saw this when it attended the Centre for the Study of Violence and Reconciliation (CSVR) seminar on the student uprisings and the rise of fallism on Thursday.

Researchers from nine of the 21 South African universities presented research into an analysis of the #FeesMustFall movement. The seminar revealed a number of dynamics that are at play in a movement that is presented as uniform but is, in fact, far from it.

1. Our accepted definition of violence is simplistic and limited

There has been public outcry at the violent nature of the student protests where the media and the public have condemned the rock-throwing, burning of buildings and property damage. However, researchers pointed out that our definition of violence is narrow where it ignores the institutional violence of inequality, exclusion and dehumanisation.

Ndlelu: our definition of violence is simplistic and limited in general. It ignores institutional violence. #FeesMustFall Report.

Professor Achille Mbembe, who was a discussant of the first panel in the programme, agreed that inequality is violence. Students were critical of Mbembeâ€™s sudden broadened definition of violence when he had previously likened the University of Cape Town (UCT) studentsâ€™ tactics to Nigerian militant group Boko Haram after they punched Vice-Chancellor Max Price. Mbembe: we are dealing w the violence of the state, of the economic order and certain forms of knowledge. #FeesMustFall Report.

2. It is important to be nuanced in our understanding of violent student protests

Researchers said students were also critical of the way the public and the media prioritised inanimate objects over real students with real issues. Why do we prioritise the libraries over the homeless students who have to sleep in them?

Researchers were critical of the way the public focussed on the surface of the violence of the student protests without delving deeper and asking why protestors had taken such drastic steps in their plight to be heard.

Mokwebo: why don’t we ask WHY students are throwing rocks, burning things, going naked. WHY is institutional violence not questioned?

Student protests have been going on for a long, long time at historically black universities and universities of technology. The public and the media only took notice when historically white universities began protesting and added a hashtag to collectivise the protests into a national movement.

FMF did not get recognition at first because it was being fought by historically black universities. #FeesMustFall Report.

Vilikazi: No one is listening to impoverished students. They think if they yell, someone will take notice. #FeesMustFall Report.

Whatâ€™s worse that is historically white universities like Wits and UCT usually get more coverage and public interest, while black universities – which had been protesting first – are still not heard.

An interesting dynamic was raised by Musawenkosi Malabela, who researched the student movements at Turfloop – or, as it has recently been named, The University of Limpopo (UL). Malabela asked why management forced students at UL to go home following protests last year when Wits Vice-Chancellor Adam Habib took extraordinary measures to complete the academic year.

Malabela: Why must rural students go home and be reminded of their poverty but urban students continued? #FeesMustFallReport.

Mogano: What was Habib saving? For who was he saving the academic year? We are saving someone’s holiday to Thailand. #FeesMustFallReport.

5. Not all the student protests fall under the umbrella of #FeesMustFall

Yingi Edwin, who researched UniZulu, pointed out that not all student protests belong under the hashtag of #FeesMustFall. Edwin said that struggles between rural and urban folk differ and that the needs of the students in UniZulu – which is located in rural KwaDlangezwa – are captured by the National Student Financial Aid Scheme (NSFAS).

Edwin said that students at UniZulu had been protesting because their lecturers had not been attending classes. What the researchers called â€œlazy journalismâ€ swallowed the studentsâ€™ narrative by equating the protests to #FeesMustFall.

6. There is not a uniform understanding of decolonisation and we need to open up space to speak about it

A core tenet of the #FeesMustFall movement is decolonisation, but there is not a uniform understanding of the term – especially between historically white and historically black universities.

Malabela: They believe Eurocentric education will make them competitive in the job market. This is unexplored nuance. #FeesMustFall Report.

The seminar took place on 9 March, which marked two years since Chumani Maxwele threw human faeces on the Cecil John Rhodes statue in Cape Town. Many believe his actions birthed the #RhodesMustFall movement which then went on to spark #FeesMustFall. However, according to UCT researcher, Sandile Ndlelu, students think otherwise.

Ndlelu, Malabela and Thato Mogano warned against the â€œMandela Trap.â€ Mogano spoke of how the coverage of #FeesMustFall centres around figureheads that the media identifies like Mcebo Dlamini of Wits and Maxwele of UCT. Just like people had accredited Nelson Mandela for the fall of apartheid, the public wants to latch on to a person and worship him/her. This is especially prevalent in Wits and UCT.

Researchers said portraying particular students as icons of the movement is dangerous and the reason why students originally favoured a flat leadership structure.

Mogano: We’ve fallen into the “Mandela trap” of hero worship in FMF. This is why students wanted a flat structure. #FeesMustFallReport.

8. It is impossible to speak about the student movements without the gendered conversation

Mswane: When we do not have the conversation about gender we are producing a conversation of erasure. #FeesMustFall Report.

At the same time, we cannot deny that there has been an exclusion on queer bodies in the student movements. In UCT, in particular, the Trans Collective condemned the movement for paying lip-service to intersectionality to sell their struggle without actively promoting inclusivity.

9. Rape and sexual violence is a sensitive matter and should be condemned no matter who the perpetrator is

There was a deep discomfort in the room when an older man who described himself as an apartheid activist made insensitive comments about rape. He asked the researchers not to make an enemy of the black man when it was the white man who had â€œrapedâ€ our country – its people, land and resources. The panel condemned his comments and the lack of sensitivity about rape.

Rape and sexual assault is a lived reality and can only be used to describe the violation of someoneâ€™s bodily integrity and consent. It cannot be used in conjunction with colonialism unless it is specifically rape-related.

10. The understanding of intersectionality is steeped in power dynamics

At the end of the last panel, after all the speakers had presented their research it was supposed to be concluded by a white activist, Adele Kristen. Mindful of her positionality, Kristen offered not to speak.

Mogano – as the chairperson of the session – used his discretion in disallowing Kristen from speaking. This opened up a heated debate. Oliver Meth said the intersectionality of the movement demands her voice to be heard. Mogano, Moloi and Ndlelu disagreed.

They said that intersectionality is steeped in power dynamics. A white womanâ€™s voice has the power to swallow and drown out all the black voices. The positionality of whiteness lends power to its narrative. Mogano said that white people had never used their bodies – the way he did – barricading gates or facing rubber bullets and stun grenades on the picket lines. They should not be allowed to give voice to a struggle that is not their own.

Ndlelu: Intersectionality is driven by power. Some spaces have to be exclusive to black/queer/womxn. #FeesMustFallReport.

Can white people be allies in the struggle if they acknowledge their positionality? #FeesMustFallReport.

*The term â€œwomxnâ€ is used intentionally to be inclusive of all femme identifying bodies, not just cisgendered women. The author also uses the term â€œwomxnâ€ to acknowledge that student movements referenced in this article are intersectional and included non-binary gender identities.