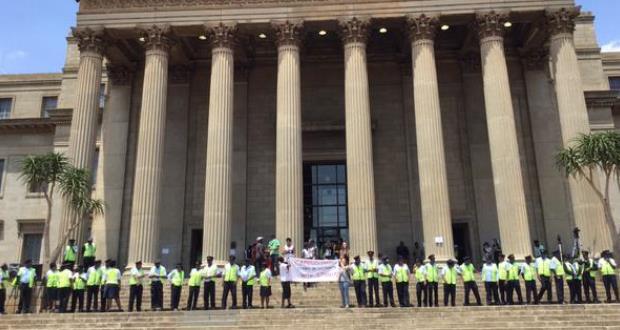 While news reports and timelines are filled with images of burning tyres and overturned police cars, the #FeesMustFall protests brought many South Africans together in support and solidarity. BENAZIR CASSIM rounds up her favourite images fromÂ the less-documented side of the protests.

1. Wits campus control came over to the light sideÂ early on, showing their support for students even as they patrolled campus:

2. Students at Wits arranged tutorials and study sessions to prove that it is possible to be dedicated to your studies and your cause at the same time:

3. Wits SRC collected donations for those who slept in Senate House (or Solomon Mahlangu House as students have renamed it) during the campaign:

Female students in need of sanitary products – we’re stocking up the bathrooms in SH and CB (thanks @Mutondwa_ !) pic.twitter.com/Nmn610ZLwI

4. Students showed a deep spirit of generosity and camaraderie towards their fellow protestors. Â

5. After students were arrested for protesting outside Parliament, Equal Education and other NGOs offered legal assistance to those stuck in jail:

6. A seemingly ad hoc organisation, #Medics4FMF, collected medical supplies to help anyone injured during the protests:

7. At the Union Buildings, students made a human shield around Muslim students who’d stopped to pray in congregation on the lawns:

8. After a week of protests ended in Grahamstown, students at the institution currently known as Rhodes came together to clean up the streets:

Cleaning up the remains of burned tyres is dirty work but students are hard at work #FeesMustFall #NationalShutdown pic.twitter.com/LCZt9oHPai

9. Same for the University of the Western Cape:

10. And in Jo’burg, following the students’ march to Luthuli House: