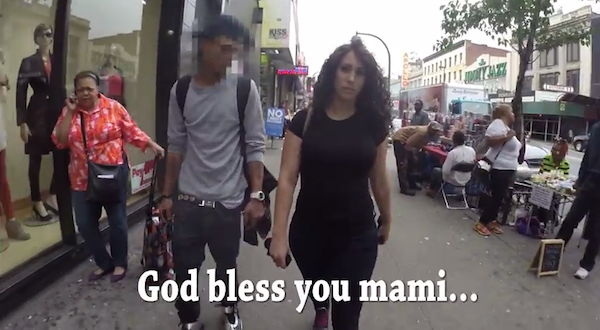 This video should be enlightening for anyone who was under any illusions about the existence, and damaging nature, of street harassment.

In a public service announcement video created by Hollaback, a non-profit movement to end street harassment, a hidden camera records actress Shoshana Roberts walking the streets of New York for a day, and captures dozens of instances of catcalling and verbal harassment ranging from “How you doing” to “Damn!” (It does not however capture the equally appalling winks and whistles she was subjected to). In one chilling segment, a man follows alongside her for five full minutes, saying nothing, his presence ominous and threatening.

“At its core, [street harassment] is a power dynamic that constantly reminds historically subordinated groups (women and LGBTQ folks, for example) of their vulnerability to assault in public spaces. Further, it reinforces the ubiquitous sexual objectification of these groups in everyday life,” says Hollaback.

“Even a knowing look to the person being harassed can reduce their trauma and experience of isolation,” says the organisation.

Have you experienced harassment in your daily life? Tell us about it, tweet us or contact one of our reporters.