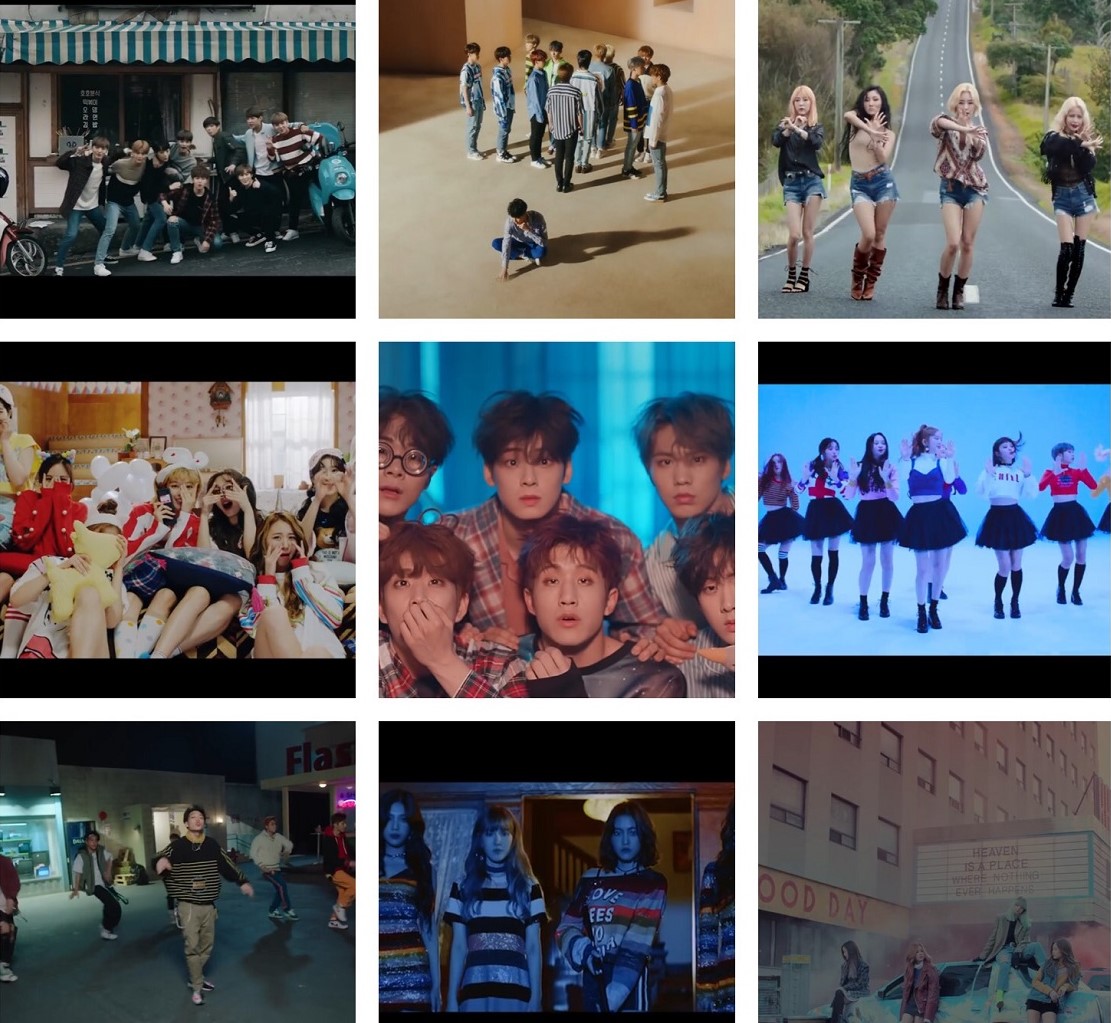 If you’ve never watched a K-pop music video before, prepare to be thoroughly shaken. K-pop MVs are a delight to behold from the fantastic production, interesting and well-executed concepts, and perfectly choreographed dance moves. The visuals and singing performances from the idols pull the whole thing together. It’s no wonder that K-pop videos keep are racking up the views on YouTube. SHAAZIA EBRAHIM and FATIMA MOOSA round up their personal favourite K-pop MVs from the past couple years.

6 K-pop Groups That Are A MUST Listen

Where does a person even begin with why Blood, Sweat and Tears is the K-pop music video to watch? Blood, Sweat and Tears is pure art – there’s no other way to describe it. The video is a montage of literary, philosophical, and artistic allusions “ Herman Hesse’s Demian, Abraxas, paintings, sculptures and Nietzsche quotes. Its neon colours are jarring against the dreamy, mock-Victorian aesthetic. It’s about art and the sacrifices artists make and the obstacles they overcome for their art. Also, watch out for the 4-minute mark on the video because the screen will fade to black but there is much more to come. Take it from us this is the MV that will get you addicted to K-pop if you aren’t already.

The four-member girl group BLACKPINK is well known for their killer tracks, powerful dance moves and stunning visuals. Their music videos are always plain delightful to watch, but Stay is an underrated video. It’s not as upbeat and sexy as the others, it allows us to see the girls’ softer side. With it’s bubblegum pastel palette in a deserted junkyard, it has an ethereal quality. Jisoo brings all of the visuals as she swings above the junkyard in the yellow dress, Lisa skips through deserted hallways, Rose strums beautifully on the guitar and Jennie stares soulfully into the camera. The lyrics plead with a lover to stay, and if it’s up to BLINKS, we’ll stay with BLACKPINK forever.

EXO is best known for a manly “namja” vibe in their music videos and Monster is the truest representation of that. It is also EXO’s most viewed music video and it’s honestly not hard to see why. From the chains the members’ sport to the dark eye makeup, this video is a thrilling ride from start to finish. Coupled with the group’s amazing vocals and fancy dance moves, it will draw you in and have you pressing replay over and over again. The song is an odd mixture of rebellious behaviour by fighting against the police while the lyrics speak about being a monster but it totally works. Also, rapper Chanyeol’s red hair and Baekhyun’s visuals for this video are just a thing of incomparable beauty.

Red Velvet has a dual concept. “Red” showcases their vivid and bold image and “Velvet” reflects their classy and toned-down side. In Peek-a-boo, both concepts are shown to perfection making it near impossible to distinguish between bright and upbeat or dark and mysterious. Basically, in the MV the members live in a sorority-style house where they practice killing people and offering sacrifices “ you know, Scream Queen vibes. The girls are transformed into femme fatales practicing to hunt innocent delivery boys down with slightly creepy smiles on their lips. While they’re flirting with a dangerous image, they still manage to look fabulous in glittery rainbow get-ups and then blood red dresses. It’s a mood.

There’s just something about iKON’s effortless cool that is so appealing. Love Scenario, the song, is weirdly popular among little South Korean kids – and is even banned in schools. The music video itself is so smooth and entertaining to watch. It has laid back vibes and shows the boys just hanging out, all cool. Take it from us, their visuals slay. The camera pans across deserted streets, buildings and the outside of a strip mall following the boys who are dressed in oversized clothes and sneakers. The song itself is so catchy and effortlessly blends rap and vocals. As for the dancing, you can expect nothing less than perfection. We stan.

One of the most addictive K-pop songs, the BBoom BBoom music video will have you bobbing your head and attempting to learn the point dance immediately. MOMOLAND brings the cuteness to the max with this video through their visuals, outfits and the lyrics. Interspersed between scenes of the members dancing shows the members selling products through a chat line. (Odd, we know, but just go with it). The rap line in the group brings a refreshing faster-paced change to the sweet lyrics of the song. The video is a perfect mix of the dualities of the group in terms of both sexy and cute and is an overall jam.

The MV for ASTRO’s Crazy, Sexy, Cool has such an effervescent, dreamlike vibe and is so captivating to watch. The song itself has nu-disco, synth-pop elements and is a complete bop, as expected. The MV dropped a day after Halloween and is pretty creepy and mystical. It shows the boys being roused from their sleep and surprised by a mysterious, otherworldly silhouette, who they can’t help but fall for and attempt to confess their love. It’s like Peter Pan meets Narnia in the K-pop world. The boys in pajamas is just the cutest thing. It also shows the comically cute moments the boys are known for and scenes featuring them in funky suit ensembles outside an industrial space, where they perform a perfectly synchronous – and playful – dance. We also have to say that Cha Eunwoo might be the most beautiful human alive!

TWICE – What is Love?

What is Love? Is like a love letter to everyone who adores rom-coms. The TWICE MV draws inspiration from all some of the most famous film moments. It features references to the classic films like Pulp Fiction and the nostalgic feel-good film The Princess Diaries among others. It’s a bubblegum electro-pop track that is uber catchy. The nine members sing of their desire to know the elusive feeling of love that they’ve learned about through fictional depictions of what it is. The video shows women exploring what love is by recreating iconic cinematic scenes. In between this, there are scenes of the girls at a sleepover watching the movies, and dancing in beautiful, tea-length cocktail dresses and 90s-inspired ensembles. The whole thing has a very romantic, dreamy and nostalgic feel. It’s pretty adorable.

Compared to most of the girl Kpop groups, Mamamoo has a very mature sound and visual presence which is evident in this video. Filmed in New Zealand, this video will make you want to jump in a car and take a long road trip. Moving from the mountains, to the sea and everywhere in between, the scenery in Starry Night is unbelievably beautiful. The members of MAMAMOO also serve some looks with a very laid back style. Just like any other song from the group, the vocals of the members are on point making the entire video a viewing and listening delight.

The ultimate summer song, Oh My! by Seventeen is the perfect K-pop themed music video. Stylised with gamer vibes with dance moves that reflect that, the video is a simulation of sorts. It shows the members having a sleepover which turns into them flying around the room. There is clouds, pastel colours, sunflowers, fireworks and random safari animals. The video is confusing but at the same time a pure thing of happiness. After watching the video for the first time will leave you singing the chorus along during the second, third and hundredth time of rewatching the video. A particular favourite scene from the video is near the end where the members have a pillow fight. If that doesn’t say summer, we don’t know what will.

There are actually two versions of this song by Wanna One: the performance and the movie one. While both are great, we personally recommend the movie version. (Do check out the performance one as well though!) Told in storytelling form, two of the members of the group play estranged brothers and what happens when they meet again after many years. The video manages to show how talented the group is. The members manage to convey so much emotion through their acting. It just such an experience to watch. The plot draws you in and yet at the same time does not distract you from the lovely vocals of the group.