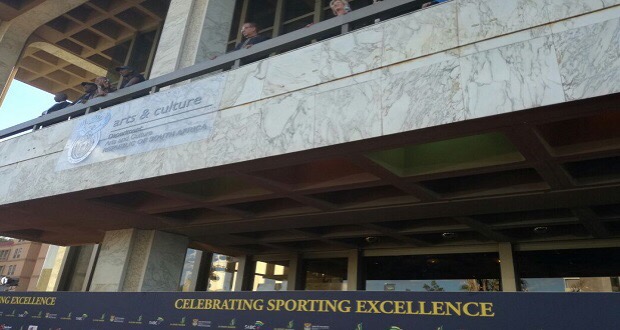 The 2016 South African Sports Awards were an opportunity for Wayde van Niekerkâ€™s name to go up in lights, as he took home five awards, including Sports Star of the Year and Peopleâ€™s Choice Award. But as deserving as Van Niekerk is of his many accolades, the focus on him highlights the lack of coverage or hype of sportswomen.

I was the first to arrive early on a chilly Sunday morning at Montecasino Boulevard, awaiting the bus that would take me and a number of other journalists to Bloemfontein for the glitzy awards.

Grinning from ear to ear, this being the first story that I was travelling to cover, I could hardly contain my excitement. Unlike me, the seasoned journalists I was with actually did manage to play it cool.

As our little blue and white bus made it through the patchwork of green and brown land on its way to Bloemfontein, I thought of how apt it was that we were going to the hometown of one of our greatest ever athletes, Wayde van Niekerk.

I remember my dad, a real sport fanatic, being excited about a youngster from Bloemfontein a couple of years back.

Today, Mr 4303 as everyone calls him (after it took him 43.03 seconds to clinched gold and break the 400m record at the Rio Olympics), is world famous. While I was excited to see him on the carpet, I was even more eager to observe whether sportswomen would be covered as extensively as the men.

Sportswomen are paid less than sportsmen, this we know. Male sport also gets better coverage than female sport – not only in South Africa, but globally. I made a mental note to watch whether the coverage of the Sports Awards would be equally skewed. As I took up a spot on the red carpet and prepared my inner Joan Rivers, I was excited to see our Olympians in something other than of those oversized tracksuits that got all the wrong attention in Rio. A highlight was seeing Caster Semenya, with her wife Violet Raseboya. Sadly, Semenya does not seem too fond of journalists and is impatient with cameras and repeated interviews. Who can blame her when so much coverage has been on the controversy around her gender instead of her sporting achievements?

Wayde van Niekerk, on the other hand, patiently spoke to everyone who requested his time and posed for what seemed like hundreds of photos.

The journalists were then ushered backstage where tables were set up to allow us to churn out the news. It was a dimly lit venue – not conducive to selfies, I can assure you – but comfortable enough. As sports winners were announced, they were ushered into our little backstage venue to be interviewed.

I got chatting to student and journalist of Kovsie FM, Sam Ludidi about the coverage of sportswomen in the media. Ludidi, who also coaches a women’s cricket team on varsity level, told me that he thinks there is a lack of coverage of womenâ€™s sport in the media.

â€œI walked through Supersport a couple of weeks ago and most of the pictures that were portrayed were pictures of men, which I found quite interesting. I think it [womenâ€™s sport] is a growing industry, it’s a growing brand. Iâ€™ve seen that Cricket South Africa as well as the ICC [International Cricket Council] have made a concerted effort to get women’s cricket out there. Theyâ€™re covering all the games that the girls are playing, home and away as well. So thatâ€™s promising. I think it’s a crucial thing for media to get behind it as well because thereâ€™s a lot of ladies who have got extraordinary talent in sport that weâ€™re just not seeing because it’s drowned out and shadowed by everything else,â€ Ludidi said.

I agree. Why should your fulfilment and achievement be worth more than someone elseâ€™s because of your gender? Both parties put in the hard work and sweat, yet the media clamours around sportsmen and is not as focussed on the women.

I managed to grab Ilse Hayes, our 400m Paralympics silver medallist, and asked her if sheâ€™s noticed a difference in the media coverage. â€œThereâ€™s still a difference between the male and female events and thereâ€™s still more prestige added to the male events. Its moving in the right direction, women are getting much more coverage and getting a lot more say in a lot of things. I think the reality is that if you ask someone if they want to watch the [Usain] Boltâ€™s 100m or Shelly-Ann Fraser-Pryce’s 100m, definitely they would say Bolt,â€ Hayes told me.

There is an argument that people are not as interested in women’s sport because sport requires physical strength which women do not naturally possess. However, this is slowly beginning to change. During the 2012 Olympic games, the most watched event in South Africa was the match between Sweden and Banyana Banyana which reached up to 2.7 million viewers.The interest in women’s sport is changing and media coverage needs to change too.

While at the awards, I could tell that the sportsmen did get more coverage than the sportswomen. Van Niekerk, who received five accolades, was clearly the star of the show and deservedly received the most coverage.

I asked the incredible â€œTannieâ€ Ans Botha – Wayde van Niekerkâ€™s coach – for some advice to young women who are interested in pursuing sport.

â€œFollow your dream, work hard, be dedicated, but know where each and everything comes from and be thankful.â€

I think thatâ€™s a universal message that transcends gender, and even sport.

At the end of the day, Razzmatazz aka sports minister Fikile Mbalula and his team put together a wonderful ceremony packed with the promised glitz and glamour, highlighting the incredible sporting achievements of our country.

Personally, the awards reminded me how important it is for the media to raise the profile of our sportswomen so that they can have better exposure and opportunities and we can move toward gender equality in sport. Personally, Iâ€™m more committed than ever to this.

And thats a wrap. SASA 2016 has come to an end. Its been real, Bloemfontein âœŒ