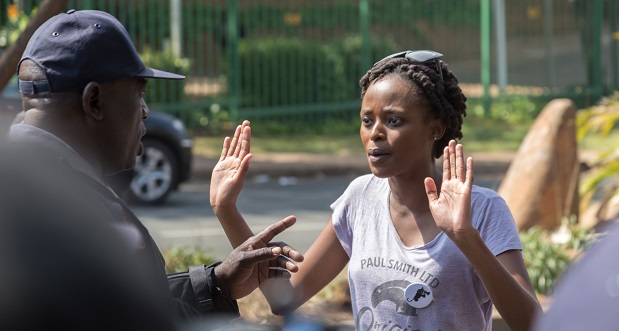 In 2017, the #FeesMustFall uprising is likely to face its most decisive moments yet, with mass protests periodically grinding South African universities across the country to a halt, the rising militarisation of campuses, rising tensions between activist groups, and waning public interest all painting the tapestry of what looks to be a difficult and uncertain year to come.

Activist Bonginkosi Khanyile, a student at the Durban University of Technology, has widely been regarded as the only #FeesMustFall activist remaining in prison. With over 100 days in political detention, his bail – which has now been denied on three separate occasions – has become among the most painful and sobering warnings, not only of the extent to which the state will go to demoralise the movement, but also a clear sign of what is to come.

The dramatic differences between media coverage of activists closer to the centres of power, such as the Mcebo Dlamini case in 2016, in comparison with Khanyileâ€™s detention, have widely come under fire on social media and have sent clear cautions to the politics of glorifying protest arrests that, to date, have proven to be potentially divisive, expensive and undoubtedly damaging for morale.

Overbroad interdicts, granted within a moment’s notice, have been the tactic of choice by vice chancellors across the country, as these legal orders allow faster entry for police to enter campus boundaries during protests, usually under the pretences of the protection of university private property. But it is visibly for the purpose of demobilisation, seizure of agitators, and discouraging public assembly. Much like in the case of Khanyile, the denial of bail hearings after arrests conducted during protests has proven a useful political tool to diffuse momentum as the student movementâ€™s resources and human capacity tended to buckle under an assault on all sides.

This environment has made it increasingly difficult for democratic processes of collective decisionmaking and accountability to evolve within the movement in a context where waves of private security, police, and looming threats of university suspensions make it difficult to hold meetings; let alone educational movement in building spaces.

Campus shutdowns became the method of choice, in my understanding – the dominant thinking being that without reaching a critical mass with other campuses, communities and workersâ€™ union marches directly to the state would be quickly diffused and fail to go beyond what was achieved at the Union Buildings and Parliament in late 2015.

Simultaneously, the state and university administrators responded swiftly by opting for campus closures for extended periods, particularly during September and October, in attempt to weaken the movementâ€™s momentum ahead of the examinations period, which setbacks at several institutions continued with relatively few disruptions.

#FeesMustFall, #EndOutsourcing, and #OutsourcingMustFall, among other similarly themed campaigns, have run very closely alongside one another and continuously stressed the centrality of the student-worker alliance.

At the end of 2015, a domino of â€œin principleâ€ agreements of universities – particularly at the elite campuses – to end the practices of insourcing brought tangible gains for some workers; including higher wages, benefits such as medical aid and greater access and inclusion into their home institutions .

As expected, the devil is in the detail and sustained, consistent activist work was required to assist independent workers, collectives and unions to guard against victimisation, retrenchment and disadvantageous insourcing negotiations. With the political fallout from the weakening of ANC-allied unions such as National Health Education & Allied Workers Union, the consequence has meant that 2016 was also a building year for alternative unions on campuses, which arguably contributed to unstable protest environment on campuses.

Positive interim gains are continuing to roll in with insourcing processes happening at different speeds on each campus, and it will become increasingly important to build on and support what has been achieved. It is important to remember that one of the primary benefits of insourcing was ultimately to improve the prospects of collective bargaining by having a single employer for a larger mass of workers, affording the unions more leverage in disputes.

This could potentially also produce more effective and stable protests into the future, should hard fought spaces for workers to organise remain open and supported beyond moments of immediate victory. The question of union participation is bolstered by growing attempts by postgraduate students, tutors and teaching assistants to join protests through collective actions like boycotts which could potentially galvanise the unionisation of the exploited lower wrung academic workers.

One of the consequences of the steady defunding of public education in the context of broadening access has meant that students from working class households have either had to incur large amounts of debt, both in and out of NSFAS, or win merit scholarships from departments and trusts or compete for bursaries funded by private companies that lock many of these students into rigid agreements with strict controls that offer harsh penalties for failure.

The thin tightrope that indebted students of various kinds must walk is made even more treacherous in the context of campus protest, where both the likelihood of involvement and the brunt of the consequences of the protests are most heavily felt on those who can least afford error.

A troubling thread shared via Twitter demonstrates the danger of allowing the private sector inordinate control the educational destiny of vulnerable students. As special clauses are included in contracts to forbid participation in protests, students are trapped in a scenario where they either allow the momentum gained against tertiary educationâ€™s exclusionary practices to dissipate or risk personal devastation. By now, countless students who may never be known or credited for their sacrifice have paid this price.

We owe it to ourselves to act proactively, particularly upon the fracture points that remain obviously outstanding, while defending the gains, no matter how small they appear at this stage as we collectively look to build organisations and capacity to achieve the aims of free, decolonised education.

For as long as the flames of #FeesMustFall remain dependent on external factors like fees announcements and so on, the task of the authorities will remain simple – contain, expel, repeat. Ours is to build an internal dynamism within the movement that propels us forward toward the just objective on the fuel of the organic and genuine needs of the oppressed.