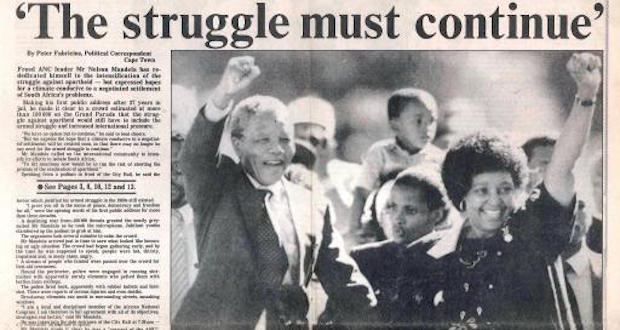 On 11 February 1990, Nelson Mandela was released from Victor Verster prison after spending 27 years as a political prisoner. It was a momentous day for all South Africans, especially those who fought in the liberation struggle. Twenty-five years later, the country still looks back on the moment seen as South Africaâ€™s first step towards the society we have today.

Accompanied by his then-wife Winnie Madikizela-Mandela, Madiba was welcomed back by thousands of jovial citizens who had waited almost three decades for his release. From Victor Verster Prison, he made his way to Cape Town City Hall, where he made his first public address since the Rivonia Trial in 1964.

Mandelaâ€™s release, and the release of other political prisoners, was a clear indication of victory over the Apartheid regime. The country came to a standstill that day, as people waited to hear what Mandela had to say.

â€œAs Mandela walked out of prison with the Amandla salute, we knew that the values of non-racialism and democracy were triumphant over Apartheid,â€Â said Ahmed Kathrada, a struggle stalwart who was imprisoned alongside Mandela for 26 years.

On Tuesday, Archbishop Emeritus Desmond Tutu recalled the day of Mandelaâ€™s release, which he almost missed. â€œI believe that the tall figure which emerged through the prison gates on that warm summer’s day 25 years ago had a critical advantage that transcended political strategy,â€Â he said.

President Jacob Zuma also took the time to honour February 11, saying that this day represents the resistance of the liberation movement across Africa and the world.

â€œIt is a reminder to all of us of our innate capacity as South Africans to overcome even the most daunting challenges and ensure the triumph of good over evil,â€Â said Zuma. In his speech that day, Mandela said: â€œToday the majority of South Africans, black and white, recognise that Apartheid has no future. It has to be ended by our own decisive mass action in order to build peace and security. The mass campaign of defiance and other actions of our organisation and people can only culminate in the establishment of democracy.â€

And what does this Daily Vox journalist recall about that famous day. To be honest, I was not yet born, but over the years my parents and elders have shared their experiences of the day. My mother, who was pregnant with me at the time, tells me she was cleaning the house when she heard the news.

â€œI was with your father and grandmother; we listened on the radio because we didnâ€™t have a TV then. We jumped for joy and shouted with excitement because we knew that only great things were ahead for our country,â€ she recalls.

As I write this, while listening to Mandelaâ€™s speech on YouTube, the electrician fixing the lights in my room overhears and this sparks a conversation.

Ntate Eugene is 55 and has forgotten what he was doing on that day, but tells me it changed the course of history.

â€œNgwanaka (My child), had Mandela not been released, do you think we would both be here? I am in a black childâ€™s room, fixing her lights, at the instruction of a white man,â€ he said.