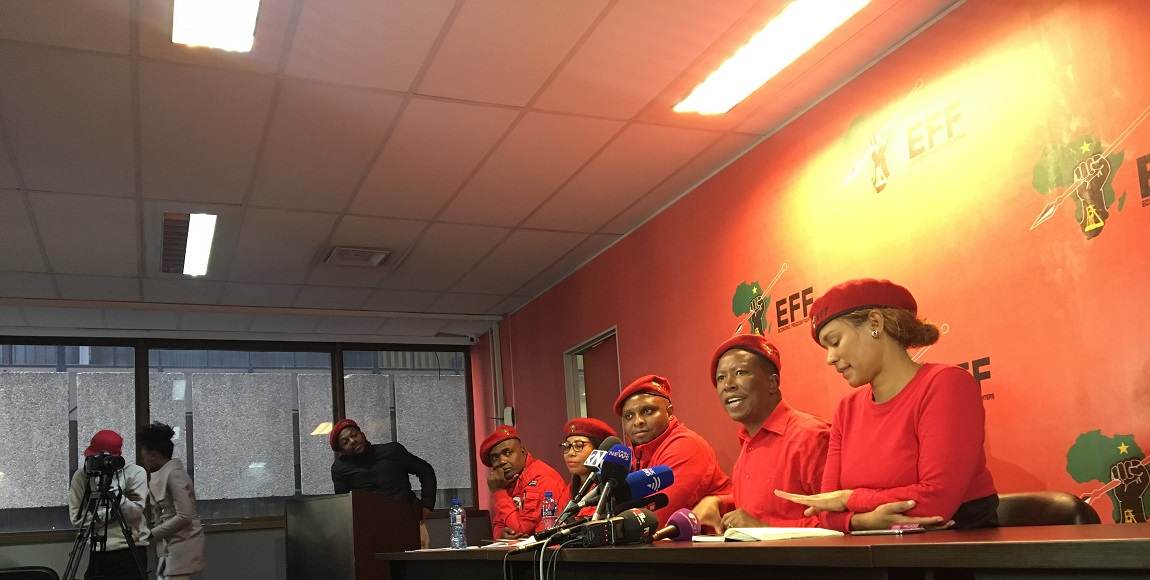 The Economic Freedom Fighters revealed that they have agreed with Contralesa (The Congress of Traditional Leaders of South Africa) that traditional leaders are important in the land question. On Thursday, the party held two press conferences at their headquarters. The first was a joint one with Contralesa regards their discussions while the second was the EFF statement. The Daily Vox team rounds up four of the most important takeaways from the conference.

EFF And Traditional Leaders Unite Over The Land Question

During the joint statement by Contralesa and the party, the traditional leaders announced they had met with the EFF because they were meeting with all progressive leadership about the land question. The EFF and Contralesa has agreed that Section 25 of the Constitution needs to be amended to allow for expropriation without compensation. They have also agreed that the state should be the sole custodian of all South African land. The two parties have also agreed that on issues like the Ingonyama Trust those should be decided with discussions amongst the relevant stakeholders and not in the media. Julius Malema, the president of the EFF, said they do not understand the overreaction about the former president, Kgalema Motlanthe’s report on the trust as it is just meant to be recommended which still need to be considered by parliament. Part of the discussions with Contralesa is that traditional leaders need to ensure that one piece of land is not given to two people, there is no gender discrimination and no nepotism in the distribution of land.

Malema said they want to: “allow democracy to play its role” in the redistribution of land. Addressing the reportedly controversial comments by Zulu King, Goodwill Zwelithini during the ongoing land imbizo taking place in KwaZulu Natal, Malema said the comments form part of the robust debate that is taking place around the country on land.

The media and embedded journalism

When questioned by one of the journalists at the briefing about the perception that the EFF gets a great deal of media coverage, Malema says that this is because the EFF are out there doing work unlike the ruling African National Congress (ANC) and its constituents. He also pointed that there are reportedly a number of embedded veteran journalists who are are actively in support of the Ramaphosa presidency and the ANC.

Malema said just as the ANC has been challenged on a number of their statements, media house and journalists who misreport must also be challenged. Malema in particular called out eNCA saying they â€œsponsor chaosâ€ in their reporting on the land hearing and the supposed violence that took place at some of the hearings.

Ramaphosa and his presidency

Malema maintained during the press conference that it is minister of public enterprises Pravin Gordhan who is the true president of South Africa and is in fact the one pulling the strings behind President Cyril Ramaphosa. Malema said things have not changed under the presidency of Ramaphosa with rising petrol prices and the SASSA crisis. Comparing the responses to changing of ministers and boards of state-owned enterprise (SOEs) under Zuma and Ramaphosa, Malema questioned why Gordhan had so much of power to be able to appoint new boards. Malema also questioned people who said the EFF would be an irrelevant party once Zuma was removed from power and said that in fact it it the EFF who are at the forefront of the land debate. The debate being the most topical issue in South Africa at present.

The Brics (Brazil, Russia, India, China and South Africa) Summit is due to take place this year in Johannesburg with many programmes around the country leading up to the main event. Malema said it is a good platform which the EFF supports: “It is very important to create alternative platforms particularly when it comes to market…” He said it is because the world establishment are involved in protectionist measures and therefore BRICS is a platform for exploring alternative markets.

On a lighter note, Malema revealed he was backing Russia to win the 2018 FIFA World Cup because he supports the “underdog” and they are not known for their football. He hopes the country gets value for all the money that they spent for the world. Something which didn’t happen in South Africa.