Home Features “I am a 40-year-old woman and embarrassed to have voted for the...
WhatsApp
Facebook
Twitter
Email
Print 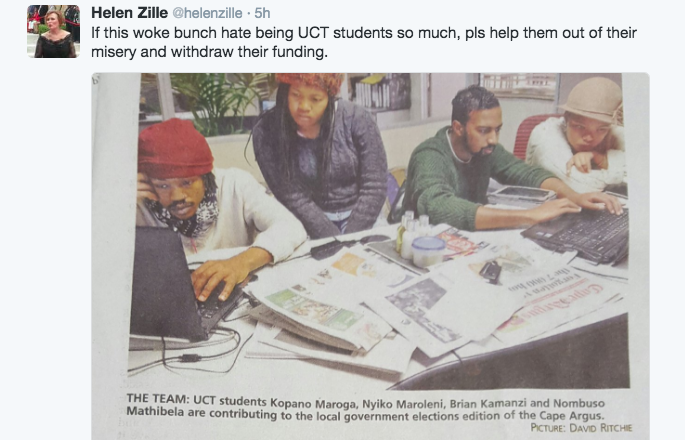 She did it again.

No sooner had the polls closed than Helen Zille dumped the DA straight into the line of fire.

It started with Zille tweeting about a group of students who described the UCT “as our present reluctant home” in an article in the Cape Argus. Zille took offence to the statement and suggested the following:

If this woke bunch hate being UCT students so much, pls help them out of their misery and withdraw their funding. pic.twitter.com/MnfdFVWB11

Well, that was odd. Given the structural issues at UCT, the students’ comments are quite standard. It’s like Zille just woke up from a time capsule. And as you can imagine, theÂ responses to Zille were merciless.

@helenzille If you said this yesterday, your black stooges would not have voted for the DA. You are very arrogant and heartless.

@helenzille I’m not a student, but a 40 year old woman now embarrassed to have voted for the DA today!!!

@helenzille Have you considered Hellen that those tax payers include the very students’ parents? But you thought only whites pay this tax!?

But @helenzille, are you suggesting people mustn’t complain about structures that aren’t in their control? Why is the DA in Parliament then?

Zille then added an addendum to her tweet, which made a lot more sense.Â

Not really. And others stepped in and asked Zille to calm down. And perhaps get off Twitter.

Students have always been like that. I know I did. #rhodes early 80s. Calm. @helenzille