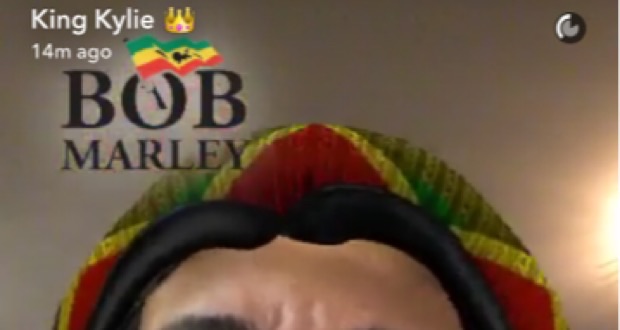 Snapchat is known for having specialised filters to celebrate globalÂ days of significanceÂ – they recently had International Womenâ€™s Day and Easter filters – but with their 420 filter, they may be taking itÂ tooÂ far.

420 – April 20, in the American way – is the day unofficially marked worldwide to celebrate cannabis culture, and Snapchat – ever on the pulse of whatâ€™s hot – has decided to commemorate it too.

The app has a filter available today only which features an overlay of the face of the legendary reggae star and icon Bob Marley. The app uses facial recognition to allow users to apply the image over their own faces, along with dreads and a beanie, and a graphic with Marleyâ€™s name and the Jamaican flag.

A video version plays snippets of Marleyâ€™s famous hits in the background. Most-followed Snapper Kylie Jenner posted a snap with the filter to her story early on Wednesday morning.

Wow. There’s definitely a “Bob Marley” snapchat filter. It attempts to make you a black man w dreads. Who said yes to that? ðŸ¤”ðŸ¤”ðŸ¤”

But we feel like something quite obvious is being ignored – the filter is a form of blackface, cultural appropriation, and totally problematic. As weâ€™ve written before, blackface is nothing other than a form of dress-up. It isÂ offensive. ThisÂ is a caricature of a black person.Â

Blackface is based on the notion of making black people look inferior. There’s no way for it to ever be something respectful. It was started in American minstrels shows in which white people would perform in blackface, portraying black people as lazy and playing up perceptions of black people as sub-human for the sake of laughs.

There’s something else wrong here too. This 420 celebrationÂ glosses over the cultural significance that cannabis has in the Rasta culture, where it is regarded as extremely sacred, and not just something used for a daily kickback. But besides that, Snapchat is reducing the legacy of a musical great to smoking weed.

Can @Snapchat explain to me why there’s a Bob Marley filter on 4/20? You realize he did more than smoke weed, right? pic.twitter.com/xPCOU5uQko

And then there’s just the messiness of equating dreadlocks with weed. Remember last year, when Guilana Rancic said Zendaya must have smelled of “patchouli” and “weed” at the Oscars because she wore her hair in dreads? Not cool, Snapchat. Not cool.

Snapchat has made a “Bob Marley” filter for 4/20? Lol don’t reduce the brother’s legacy to nothing more than a weed mascot for white hippies