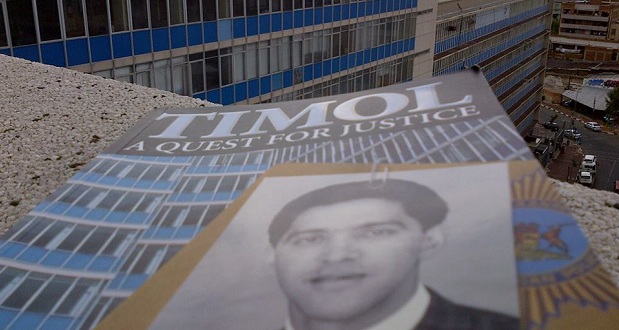 The 27th of October markedÂ the 45th anniversary of the death of anti-apartheid activist and former member of the South African Communist Party, Ahmed Timol. Until now, official records state that his death was as a result of suicide. The Daily Vox spoke to his nephew, Imtiaz Cajee, who has been pushing for another inquest into the true circumstances of his uncleâ€™s death. On Wednesday, it was announced that the National Prosecuting Authority intends to reopen an inquest into Timol’s death.

Itâ€™s the 45th anniversary of Ahmed Timolâ€™s passing and an inquest into his death is a real possibility once again. How did it get to this point?

After my uncleâ€™s death in police custody in 1971, the apartheid regime were forced, due to immense local and international pressure, to convene an inquest. But Magistrate De Villiers had found nobody was responsible for my uncleâ€™s death and that he had committed suicide. But this was a version that the family and community never believed.

When we then look at 1996 at the Truth and Reconciliation Commission (TRC) hearings, this was a perfect opportunity for the perpetrators to have come forward and make a full disclosure in order for them to be granted amnesty. But the unfortunate reality was that my late grandmother testified, relived the horrors of losing her beloved son, but none of the perpetrators came forward or were ever subpoenaed to come and testify at the TRC hearings.

In 2004, I made an application to the National Prosecuting Authority (NPA), providing them with some information that I had gathered, requesting them again to reopen the inquest. The application was turned down. The beginning of this year, with support and assistance of former TRC commissioner, Yasmin Soeker and the foundation for Human Rights, Yasmin established a formidable team that have supported me to submit an application. We were also supported by advocate George Bizos who assisted us in our meeting with the National Director of Public Prosecutions (NDPP) around January this year where we appealed to them again to reopen the inquest.

What was different about the application this time – has new information been uncovered?

What is different is that Dr Salim Essop has provided a compelling affidavit on the events surrounding my uncleâ€™s custody. Salim Essop was the last person who was in the company of my late uncle. They were stopped at a police roadblock on the 22nd of October 1971. They were both taken into custody at Newlands Police Station. This was the last time that Dr Salim Essop had seen my uncle and then they were separated – taken separately to the notorious John Vorster Square police station. The police had stated that they never laid a finger on my uncle. They said that he simply took his life because as a communist he was trained not to betray his comrades – but rather commit suicide. And their version was he wanted to avoid a lengthy jail sentence. And in their view he was a big fish, a communist catch on their hands. So there was no need to murder him.

But Salim Essop has given a powerful affidavit where he reveals the horrendous torture he had to endure during his detention at John Vorster Square – and for that he must be commended. Just reading and listening to him you know it was an a horrendous nightmare.

The argument that weâ€™re putting forward is that if they never laid a finger on Timol, then why would they go to this extent to beating Salim Essop to a pulp? Salim was very close to losing his life. And based on the affidavit, the National Director of Public Prosecutions (NDPP) has now decided to support our application which is obviously the first phase. He has now written to the Minister of Justice and Correctional Services to request that the Judge President of the Gauteng High Court now appoints a judge to reopen the inquest.

Do you think you and your family might finally receive some closure that the TRC was unable to provide?

Weâ€™re overjoyed about this commitment as a starting point. I think once we have the support of the NDPP, hopefully the process will start moving. But remember, most of the perpetrators responsible for this particular deed have passed on.

Initially I thought it was a failure on the part of the TRC, but conducting more research, one begins to understand that the TRC was very limited and did not have the adequate resources and capacity to fulfill the mandate of investigating all these cases. And hence the recommendation of the TRC was for the government to take on this responsibility of following these particular cases.

In 1996, we wanted to hold the perpetrators accountable and hopefully for them to make full confessions to what had transpired. Obviously, we missed out on that opportunity. So theyâ€™ve passed on and you know, weâ€™re always a forgiving nation. Weâ€™re looking at building our future for future generations to come. What we need now is for the inquest finding to be reversed. I mean thatâ€™s the priority. And I think that we owe it to the honour and dignity of my late uncle.

Hopefully this will set a precedent for many, many other cases, that the official records cannot remain – 22 years after the dawn of democracy – that they had committed suicide. That in democratic South Africa, it was found that Ahmed Timol did not commit suicide, as stated by Magistrate De Villiers in 1971, but that he was murdered.

Do you think that your uncleâ€™s case, and the reality of not receiving justice for what happened, speaks to something larger in the context of South African history?

Even though Iâ€™ve focused specifically on my beloved uncle, I believe he is the symbol of many others who have given their lives. I am always grateful to the Almighty that I at least have a grave to go to.

There are so many others till today, as in the case of Nokuthula Simelane. Her family till today are looking for her remains and there were individuals who were held accountable, and obviously thereâ€™s a pending case thatâ€™s unfolding, but the reality is they are looking for her remains. I can only imagine the pain that the family can go through of not even knowing where the remains of their loved ones are.

So I think hopefully this Timol case will once again bring focus to our horrendous past which we conveniently intended to forget while weâ€™re so engulfed with all the other challenges we faced. But Iâ€™m of the view that many of challenges that we face today are linked to the past. And we cannot move forward if we do not deal with the issues of the past.

The fact of the matter is we continue commemorating anniversaries of our fallen heroes and heroines year in and year out, but we make no attempt to find out who the perpetrators were. Last week, the deputy president paid tribute to Samora Machel, great revolutionary, great freedom fighter. Yet the circumstances leading to his death are not investigated. Thirty years have passed, the investigation commences, it never comes to an end and perpetrators and individuals who knew what had transpired are passing on.

So I hope my uncleâ€™s case sets a precedent and we start focusing on the unresolved issues of the past. But that does not mean we remain stuck in the past. It means by finding closure and learning from the mistakes of the past, it should inspire us to do the right things today.