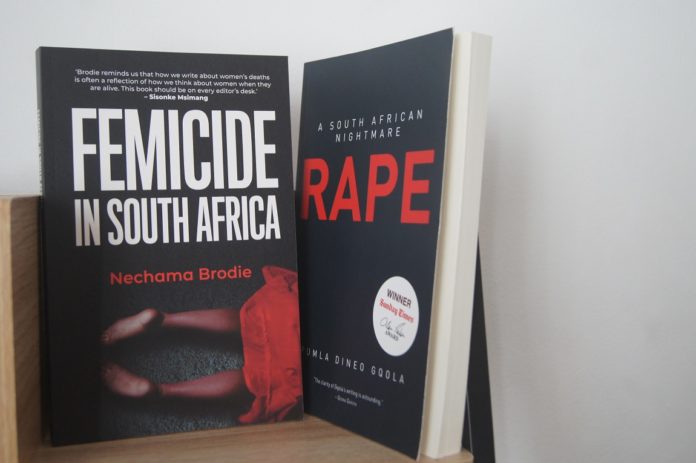 Published in 2020, this book by author and journalist Nechama Brodie looks at the story of femicide and gender-based violence in South Africa over the past 40 years. Brodie examines all the different manifestations of GBV from intimate partner violence to brutal rapes and the killing of black lesbian women. The book attempts to understand the intellectual work done around the issue, the actual statistics of femicide as well as the misinformation that has cropped up. But more than that Brodie tries to ensure the reader understands who are the real victims and survivors and more importantly the perpetrators that need to remain at the centre of the conversations.

Released in 2015, Pumla Dineo Gqola’s book Rape remains one of the most important texts to understand GBV in South Africa. The book unpacks South Africa’s relationship with rape and rape culture. It examines why South Africa has been called the rape capital of the world and whether the understanding or lack of understanding has contributed to that. Gqola also looks at the idea of violent masculinities and what that means for understanding rape. All of her work in the book is grounded in real life examples as she dedicates a chapter to the all the high profile rape cases that took place in South Africa from Jacob Zuma to Makhaya Ntini.

Kwezi by Redi Tlhabi is the story of Fezekile Ntsukela Kuzwayo and tells the story of the woman who accused Jacob Zuma of rape in December 2005. The book is essential reading for any South African who seeks to understand how sexual abuse, gender-based violence and patriarchy operates at all levels of society especially the highest levels of government. The book takes on the power dynamics of the courts and the idea that a woman is judged for her sexual history while a man’s sexual history is accepted.

Everyday Sexism is another important read to include in the discourse around gender-based violence. The book was inspired by a project of the same name. After author Laura Bates was sexually harassed in 2012 on London public transport she started the project. The project was a collection of stories and responses from around the world with women sharing their experiences of sexism. The book gives a voice to the protest against sexism. It contains many different stories from women in the workplace, women in education, women in public spaces and male experiences. The nuances of the stories makes this a must read.

Gender-Based Violence Perspectives from Africa, the Middle East, and India

This book goes into a lot for academic detail around the issue of gender-based violence. It focuses on three regions: Africa, the Middle East and India where it says the subject is sometimes taboo due to patriarchal cultural norms that limit women’s autonomy. The book looks at the socio-economic factors behind domestic violence but goes into the nuances of the factors. From male attitudes towards wife beating and women’s health problems due to abuse, the book provides comparative research frameworks. It is useful for understanding how gender-based violence operates on a global level and what can be done to stop and reduce gender-based violence.

These are some fiction books that deal with the issue of gender-based violence: The Colour Purple by Alice Walker, A Girl Like That by Tanaz Bhathena, I Am Vidya by Living Smile Vidya, and When I Hit You by Meena Kandasamy.