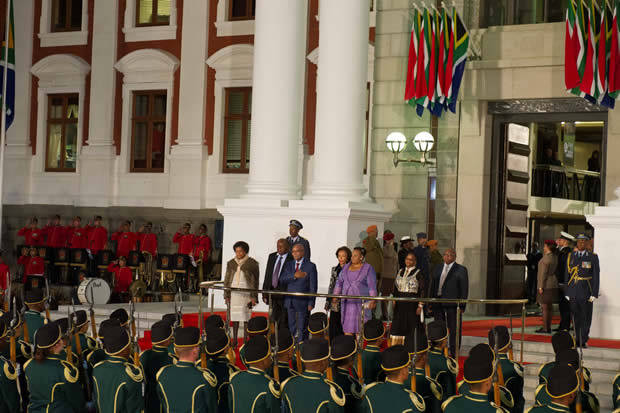 On Tuesday, President Jacob Zuma took centre stage at Parliament to deliver the State of the Nation Address for the second time this year. Zuma addressed the nation looking decidedly unwell, and his less-than-robust appearance seemed to capture more interest than his speech. For 80 minutes, the President stood before the nation and dished out some clever-sounding phrases. These buzzwords are the foundations of the ANCâ€™s ‘good story’, but what do they really mean? RAâ€™EESA PATHER breaks it down.

Poverty, inequality and unemployment are the three challenges that rule our country. As such, they have ruled Msholoziâ€™s speeches for the past five years. Unemployment and job creation have been at the centre of South Africaâ€™s 20-year narrative, yet poverty still haunts the majority of the population, with 23-million South Africans living onÂ less than R620 a month.

While 70% of the youth dawdle away in the depths on unemployment, President Zuma is adamant that in this, our second phase of transition, South Africa will prosper.

After 1994, the ANC declared that the land of South Africa was in a state of transition. The plan was to eradicate the legacy of apartheid and welcome countrymen into a new South Africa where all could live free and equal. That didnâ€™t happen.

In 2012, the ANCâ€™s chief of policy, Jeff Radebe, announced that the party was embarking on a â€œsecond phase of transitionâ€. Socio-economic redress would come with the help of the National Development Plan, said the party.

But on Tuesday, Msholozi muttered the words ‘National Development Plan’ in the first five minutes of his speech and then moved swiftly on to other things. Meanwhile, weâ€™re still trying to figure out exactly what happened during the last 20 years of the first phase of transition. While this might sound like a Julius Malema catchphrase by way of Robert Mugabe, it is an umbrella term peddled by ANC policymakers bent on finding new ways to talk about old things

Last year, for example, was deemed â€œThe Year of Unity in Action Towards Socio-Economic Freedomâ€ but like most of the policies to emerge from the State of the Nation addresses in years past, it was all just a mouthful of words.

So what exactly is this new â€œradicalâ€ paradigm to engineer socio-economic transformation?Â As far as we can tell, it includes plans to invest R847-billion in infrastructure, to assist the energy sector (good news for Eskom), and of course to create more jobs. Thereâ€™s also mention of far-reaching interventions.

Â â€œFar-reaching interventionsâ€ may sound like the national government has decided to host a mass intervention for addicts but itâ€™s actually just what the ANC uses to refer to its most recent policies for transformation.

Msholozi has said that the ANCâ€™s central focus is â€œto defeat the triple challenges that have eroded our landsâ€. Weâ€™re not yet quite sure how far these interventions will reach or how exactly they will be implemented. As ever, Number One has left us with more questions than answers.Â

Labour disputes and strikes have marred the ANCâ€™s recent years in office. The platinum belt has lit up in protest, leaving mine workers destitute and mine bosses fretting over diminishing returns.

Governmentâ€™s attempts to help negotiate a settlementÂ have been unsuccessfulÂ thus far, forcing Zuma to send the deputy president (and former mining board member) Cyril Ramaphosa in to do damage control.

According to Zuma, â€œit is critical for social partners to meet and deliberate on the violent nature and duration of the strikesâ€. As yet, it is unclear exactly who these mysterious social partners are.Â

As Zuma tells it, the ANCâ€™s good story will continue for the next five years, but the question remains, can the president make good on his promises? PoliticalÂ analysts have saidÂ that the president’s address was a lacklustre re-statement of previous speeches.Â Maybe itâ€™s time to tell a new story, eh Msholozi?