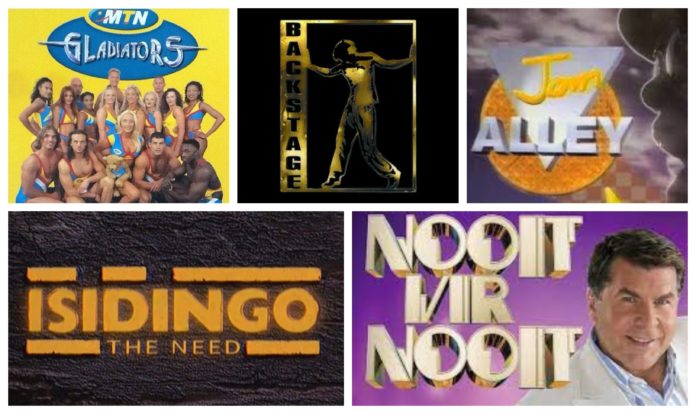 In 1976, television was only introduced in South Africa. It is hard to believe now that we can stream the latest shows and movies on our smartphones. Growing up watching TV was communal family time. We watched everything from kids shows to soapies. Imagine – we had patience back then to wait for a new episode every week!

Noot vir Noot is South Africa’s longest-running tv game show. Its first broadcast was in 1999, presented by Johan Stemmet, who retired in 2019. In each episode, four contestants interpreted a number of musical clues. The winning contestant would then move onto the semi-final and finale. A guest artist or band who also perform songs during the episode. The show is now presented by the artist and performer, Emo Adams on Thursday nights.

We can’t help but think back to Stemmet’s colourful and daring shirts, and his famous phrases. Friday nights were for hearing him say “Skitterend”, and “vyftag randjies vir jou komplimente van Absa bank” to winning contestants.

“Sorry Bongani Sorryyyyyyyyy” was one of the iconic phrases that Jam Alley gave us back in the day. The variety show used to air from 1993 on the SABC’s 1. The show was a talent and game show. Contestants answered music questions and got a chance to perform some of their favourite songs. At the end of each episode an artist would perform their latest music. Jam Alley introduced us to pop culture icons like the late Vinolia Mashego aka V-Mash and Nestum Nyakale.

After 26 seasons on air it ended in September 2012. We will always remember it as a visual record of our local entertainment culture. Jam Alley kept us up to date with local dance styles and music genres.

The MTN Gladiators game show aired on the SABC’s channel 3 for three years between 1999 and 2001. It was produced by the mobile network, MTN. The show was a spin-off of the International Gladiators. The show had contestants compete in physical events against the “Gladiators”, who would try to prevent them achieving any points. We can never forget contestants trying to get across a wobbly bridge with a heavy bag. The baton fights atop an unstable pillar were another highlight. The show was so theatrical and downright silly as a concept, but incredibly entertaining.

We miss it so much, and it is making a comeback in South Africa after a 20 year hiatus.

Isidingo was a popular South African soap opera that aired on SABC 3 from 1998 till 2020. It even went through a name change in 2001 when it was re-titled; Isidingo: The Need. The soapie was set in fictional mining-town; Horizon Deep. We were introduced to the affluent Haines family and the Matabanes. The show also followed the trials and tribulations of the greater Horizon Deep community. Isidingo also gave us the South Africa classic TV villain, Cherel de Villiers (Michelle Botes).

Isidingo also had groundbreaking storylines – that included HIV-positive and LGBQTIA+ characters. It also quickly shot scenes and rewrote storylines to mirror current issues in South Africa at the time.

Backstage was a youth soap opera that aired on the free-to-air channel eTV between 2000 and 2007 during the week. It was set at the fictional Vulindlela College, a performing arts college in Johannesburg. The show followed the lives of the college students as they try to break into their various entertainment industries.

The show gave us a sneak-peek into show business, and how cutthroat it can be. Amidst the drama, it showed the young adults navigating their personal lives.

The show also gave us memorable characters like the infamous Duke, portrayed by Carlo Radebe. His stern and gangster-like demeanour being a staple of the show.

There is a comfort in thinking back to shows we grew up watching. Maybe there was a storyline that resonated with you. Perhaps the game shows helped you test your memory skills. It could have been the only time your family spent time together after a long day at school or work. These shows are memory vaults that remind us of carefree days.