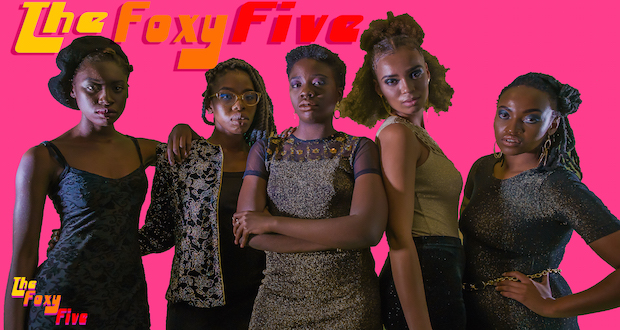 The Daily Vox spoke to Jabu Nadia Newman, the creator of The Foxy Five, an innovative South African web series exploring the lives, experiences and dilemmas faced by five black intersectional feminists – in the midst of them navigating the revolution in post-apartheid South Africa. Hereâ€™s why you should be following this youth-produced show.

1. It was inspired by the black womxn* involved in youth uprising in South Africa

During the 2015 Fees Must Fall protests, I was very inspired by the youth, especially the black womxn who were leading it. They were talking about very intricate politics and theories that I had never really heard of before then. It was really amazing to be learning about the content surrounding intersectional feminism from my peers – content that we never really covered in the university syllabus.

I had always struggled with the definitions of feminism, or even calling myself a feminist and after learning that there was this type of feminism that was integrating different aspects of their struggles.

So my way of exploring and explaining intersectional feminism, within a South African context, has been through a web series that focuses on a number of black womxn and their daily lives and struggles. The series speaks to the issues that I see as important in South African society right now, specifically relating to the identities of black womxn: race, class, gender, sex and sexuality, and, finally, unity. But it was also important to make these characters really relatable, and create almost archetypes, that the audience can immediately recognise and watch as the characters grow. So I thought of the feminist stereotypes that are portrayed and how we might move beyond these caricatures.

3. Itâ€™s about young black womxn owning and telling their own stories

Every episode is focusing on one character at a time and going into their backstory, looking at why they are the way they are. Thereâ€™s definitely running stories and running arcs, but Iâ€™m taking it as it goes – Iâ€™m letting whatâ€™s happening to us inspire the writing. Because a lot of the things that are in the series have actually happened to these womxn. Theyâ€™ve come to me with these stories. Weâ€™ve all spoken about these experiences – so everything weâ€™ve put in the series is something at least one of us has literally experienced.

I want to reflect what black womxn are talking about right now. What weâ€™re feeling, what weâ€™re dealing with – and doing that unapologetically. A lot of men are saying it’s so exclusionary, but these are the real conversations that are happening right now and we need to engage with these conversations to bring it all together and harness it.

Instead of just wanting to show intersectional feminism, I wanted the whole process to embody it. I wanted us to feel that the process we were going through, of making this series, was actually dealing with these issues. So just the effort of having to find all these womxn in all these production roles was difficult – it taught me so much about the film industry and how much more we need representation.

So I wanted to make sure that there was a representation of five completely different black womxn, it was the first time weâ€™re seeing so many different South African stories and aspects to how womxn can be portrayed in the media. But it was also important for me that the people who the series is made for, which is black womxn, can relate to it and can at least find something truthful in it that they can identify with.

5. The show is set in the 70s, features amazing cinematography, visuals and, despite the serious content, is both accessible and entertaining

The brilliant @TheFoxyFiveTV have 'nailed the art of being tongue-in-cheek while talking about serious issues' https://t.co/o1J0AGpC8V pic.twitter.com/yeRxLuAhjw

I wanted to create a world for these five characters because I knew that everything was going to be very real and documentary-like, where weâ€™d be documenting whatâ€™s actually happening in South Africa right now and putting it into theory. But I also wanted to create a separation of a different world. So I knew by using the 70s theme I would be better able to capture that.

Authorâ€™s note: The â€œxâ€ in â€œwomxnâ€ is a gender neutral replacement for â€œaâ€ or â€œeâ€. Therefore includes everyone.