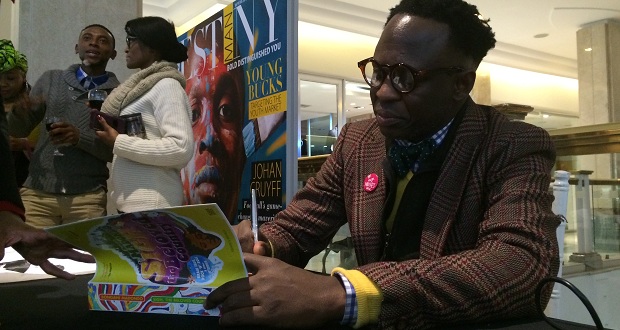 1. He writes for himself
Madondo doesnâ€™t try to appease a particular market, whether his readers are black or white, male or female. â€œI donâ€™t think of white folks, I think of people as people,â€ said Madondo. When he first started getting into writing, he felt the need to write for black people, it then grew to a need to write about South Africa and now he writes for himself. â€œI write what I love and I like,â€ he said as the book launch kicked off.

2. He is a liberal, but not THAT kind of liberal
â€œYes, I am a liberal, if we can go back to what true liberalism is all about.â€ What he means by this is that liberalism has been tainted by white racism and hijacked into an Anglophone project. Without this, liberalism speaks to our hearts and souls, he said. True liberalism is black radical humanity, itâ€™s â€œa combination of black theology and black psychic interrogation of who we are,â€ said Madondo. That is the liberalism that he is into.

3. He has an obsession with the Eastern Cape
When interrogating black modernity, Madondo asked himself the question, what is South Africa? Who are we as South Africans? What is the provenance, the geographical locus that keeps the countryâ€™s soul?

After much deliberation, he came up with an answer – the Eastern Cape. Sure, when looking back to the 1650s in Cape Town and KwaZulu Natal, the role of colonialism and slavery made a huge impact. However, â€œthe major fighting, regrouping and identification happened in the Eastern Cape,â€ he said. The area is an expression of freedom and oppression.

Madondo often thinks about the struggle of his mother, aunt and grandmother and what they had to go through while raising their families and feeding white babies. Despite being a man, he will still write about our sisters, grandmothers and mothers. Township women and rural women, especially, need to be talked more about. â€œWe need to write about ordinary women,â€ he said.

5. We should decolonise rock n roll!
Rock and roll and black women, â€œbetween the two you get what forms me,â€ said Madondo. He believes that â€œrock and roll is an unnamed, unlabelled African expression. That it is intrinsically African, but as Africans we just didnâ€™t put a label on it. Even when you look at the music of Led Zeppelin, Kid A and Radiohead, they all play intrinsic updated African music. Which is why, as Africans, we need to decolonise rock and roll and take it back.

6. The impacts of Lewis Nkosi and James Baldwin
What do Lewis Nkosi, James Baldwin and Bongani Madondo have in common? All of them were involved with or grew up in the church. These two writers, who were both preachers, had a great influence on the young Madondo.

â€œThe church has a powerful role; it is one huge indoctrinating space. Both the positive and the negative shape you,â€ said Madondo. James Baldwin taught him that, â€œyou can be a black person, but you can also be a free black person.â€ He believed in the quest for true humanity; thatâ€™s what spoke to Madondo.

7. He gives no fucks
â€œWhen you are older, you donâ€™t give a fuck,â€ said the writer at the launch. At his age, he doesnâ€™t really care what others think. The last chapter in his book was even about messing around with other writers. He’d been getting pissed off at people who said that itâ€™s not fiction if it isnâ€™t literature, so he played around with his last chapter, turning it into a sort of vanity project.

The 45-year-old, like the mark of the older generation, isnâ€™t the most tech-savvy guy. â€œI have no idea how technology works, my WiFi is always down. I am a typewriter guy,â€ said Bongani.

When you get down to it, in true Biko form, he writes what he likes.