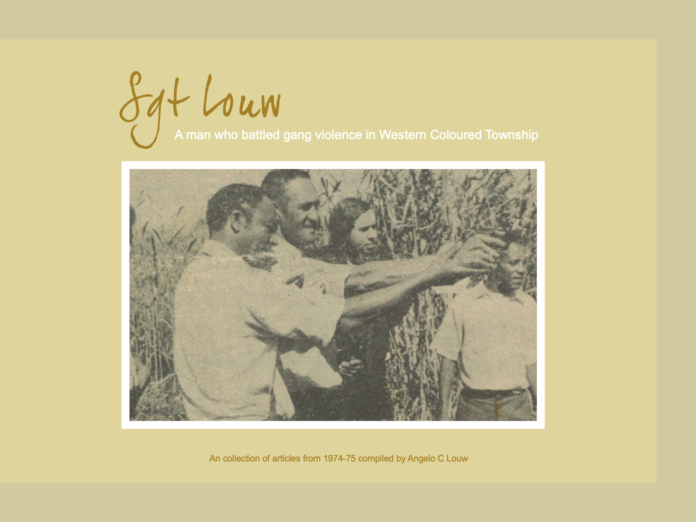 Police brutality is once again in the spotlight after SA rugby player, Lindani Myeni, was gunned down by US police. Angelo Louw, who recently handed his grandfather’s archive over to the Trevor Huddleston Memorial Centre in Sophiatown, reflects on a time when communities worked with the police for protection, and weren’t terrorised by them.

I’ve always known my grandfather to be a hero, long before I knew who he really was to the community.

My cousins all attended school in Bosmont, and would always tell me how their teachers would threaten to call Sgt Louw (as he was affectionately known) whenever their classes got unruly. It always astounded me how much respect everyone around had for him, and that he seemed to be just as much a pillar to an entire community as he was to our family.

My grandfather was always the first to show up in times of despair. He effortlessly juggled being a father and grandfather to his seven living children, their spouses and their children; while instilling in each of us values of responsibility, hope and most importantly, empathy.

But, it was only upon his death that I learned his true contribution to what was once known as Western Coloured Township (Westbury) and it’s surrounding neighbourhoods. While sorting out his belongings after we laid him to rest, we discovered a treasure trove, a collection of newspaper clippings documenting his relentless crusade on gangsterism which plagued the community in the 1970s – with the help of fearly primary school teacher, Sgt Edwin Augustus.

These articles spoke of how he single-handedly marched 16 gang members into the Newlands Police Station (Sophiatown Police Station) and slept with a pistol under his pillow while admitted at Coronationville Hospital for a week. This was the stuff movies were made of: the Lone Ranger who risked it all to restore dignity and order to a community torn by violence and terror, one in which school girls carried pangas up their skirts for protection.

It was a joy to read about how the community entrusted him and Sgt Augustus to protect them. It was a far cry from what one reads about the police in the papers these days, with the surge of police brutality around the world. I suppose the difference is that both Augustus and my grandfather were actually from the community they served, and joined the police to make a difference. His commitment to the community’s safety led him to establish the country’s first shooting club for Black people.

His selfless mission inspired me to continue working toward the empowerment of this community, and communities like this, as writer and activist. His lifelong commitment to this community proved to me that heroes didn’t always wear capes and masks – everyday heroes were brave men in plain sight, doing what they could to make a difference.

Heroes were our fathers, our neighbours and our friends. May they forever remain in our memory to inspire hope and evoke change; because the work my grandfather started almost a half century ago is nowhere near complete.

Later this year, in celebration of Sgt Louw’s 90th birthday, his family plans to exhibit the articles and other memorabilia that the Trevor Huddleston Memorial Centre. The archive is available for research purposes upon request.

Angelo Louw is an award-winning activist and documentarian who works with a number of non-profit organisations on their media advocacy strategies. He is a Fulbright Fellow, and winner of the 2019 TYI SADC Top 100, which lists the regions most influential young professionals.

All images provided by Angelo Louw.