Home Fees Must Fall A change is going to come: on the right to peaceful protest...
WhatsApp
Facebook
Twitter
Email
Print 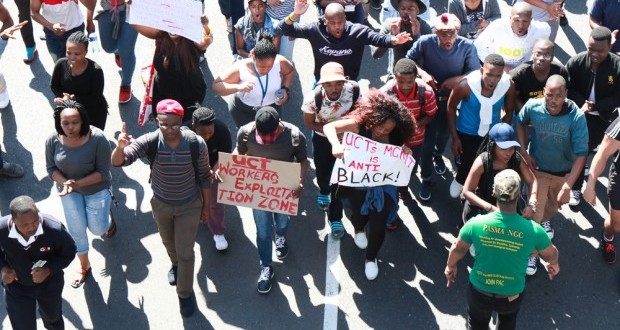 A lot has been said recently about the right to protest and the right to assembly, but what irks me is how participants who exercise this fundamental right are incorrectly classified as â€œrebelsâ€ or unruly individuals. I thought a good way to address this is to give a lecture on paper, since I havenâ€™t lectured over the last five days or so.

Firstly, the Constitution of South Africa envisages the right to protest, and this is covered by what I term the triple tier of protection – essentially, three rights giving effect to one right.These are: the rights to freedom of expression (section 16), assembly and demonstration (section 17) and freedom of association (section 18).

17 Assembly, demonstration picket and petition
Everyone has the right, peacefully and unarmed, to assemble, to demonstrate, toÂ picket and to present petitions. – Constitution of the Republic of South Africa

It is no coincidence that these rights come one after the other in the Constitution because they are collectively needed to enjoy the right to protest fully. Very few rights can be understood without a historical context and this is certainly one of them. In fact, I would argue that its very existence is as a direct result of its historical origins and importance to South Africa. If there was ever a right that had to be exalted or protected above others, it has to be this right. Why? Well, simply put, this a group right. This is a peopleâ€™s right. It says â€œI have a problem, but so does my friend and so does my friendâ€™s friend and we are all here to show you just how much of a problem we haveâ€. It is a right that shows that there is indeed power in numbers.

This right to protest was frustrated or practically non-existent during apartheid, which is probably why the drafters of the Constitution sought to ensure that the right enjoys maximum protection in the new South Africa. The right to assemble was the bane of the apartheid governmentâ€™s tenure. It was this same right that saw thousands of scholars gather to protest against Afrikaans as a medium of instruction (funny that we still fight the same struggle today but that is a discussion for another day).

This power, this people-power was the demise of apartheid. This country has a very rich culture of non-violent protests. Examples are the Defiance Campaign of the 1950s against repressive government legislation or maybe the womenâ€™s resistance campaign in the same period. Maybe we should mention the Sharpeville Massacre or perhaps the Soweto Uprising of 1976? The Soweto Uprising may well be the single most significant turning point for the apartheid state because here the young people led where their parents had previously done so. One lesson learnt from that uprising is when young people are fed up, a change is going to come.

A common feature of these protests was peace, but peace with disruption and disobedience. Yes, these campaigns and protests were very peaceful but involved disobedience of laws (particularly under the Defiance Campaigns) and disruption of some sort. But of course, if the authorities were to feel the effect of these campaigns, the strikers had to make their presence felt. Life as the apartheid government knew it, had to be disrupted and inconvenienced for them to get the message. This has to be put in context. The privileged amongst us will no doubt cry â€œlawlessnessâ€ as a defence but the reality is that it was the system that was lawless in denying people equal standing. Before the protests, much had been done to avert conflict, but the authorities would hear none of that from people they perceived to be inferior to them.

It comes as no surprise that the wording of the right to assemble includes the peaceful, unarmed element that was consistent in the non-violent protests during apartheid. Again, the historical import to understanding this right becomes obvious. What many privileged people donâ€™t see is that the right to protest is not some fashion statement that people take time to get involved in when they have nothing better to do. This is not some charitable deed that people can look at and think, â€œNcaww how cuteâ€.

Often this right is pegged on the very existence of peopleâ€™s lives. Their very livelihood and survival depends on the successful use of this right. People often forget that this is a â€œlast chance, last resort rightâ€ after which there is no hope. This is why you donâ€™t see happy protests, and where you do see them, these people have hijacked the right to make it some sort of game or joke. Those that exercise the right in the truest sense are people who have tried to speak out but no one listened – and if anyone did listen, nothing changed. These people have literallyÂ tried every other lawful resort but the law isnâ€™t on their side for whatever reason. These are people who have tried to reason with the system using structures that the system imposed, but the system knows no reason. The system was meant to work for a certain group of people, just not this group of people.

Itâ€™s unfortunate that the system does not take into account the nature of the people in it. How can a system be expected to work when all it does is undo what the fight against apartheid was about? How can one expect that the previously disadvantaged will contend with a broken system that only seeks to further disadvantage the already disadvantaged?

When this system has failed to look out for the voiceless, the voiceless get together and realise that in their collective voicelessness, they have power. Power to break a system, power to force a system to recognise them, power to create a new system. The voiceless come from families where going to university is an achievement for the whole family to celebrate. The voiceless have bills to pay before they even graduate and now the system wants them to have additional bills. Where will the money come from?

Do you see their frustration?

So, to the privileged who have been inconvenienced by blockades and told to leave buildings, remember: this is not about you. Itâ€™s about getting the system and its overseers to recognise that there are people who will not be pushed around or ignored any further. The right to protest is a right to inconvenience, because after all is said and done, it might be that inconvenience that the system recognises in order to listen to the voiceless it has ignored. Sorry for the delays in leaving the universities, sorry for the hassle and the noise. If it could be done differently then we would takeÂ that route, but the people who have the power to change things only listen to a certain voice – the voice of last resort.

Lastly, we cannot pretend like these protests have nothing to do with race, because they do. In the final analysis, more black students will get involved in these protests when compared to their white counterparts and logically so (of course this is a generalisation). The hard- hitting truth is that this is not just a student fight â€“this is very much a black fight (specifically, but not exclusively). It is, after allm the student who apartheid did not recognise who still has to contend with the shackles of apartheid that remain tied to him or her. Itâ€™s not a crutch statement, itâ€™s a lived reality.

It often amuses me how many people would protest in the way that students have (and do more)if it were a protest over animal rights or to find Cecil the lionâ€™s killer. I know many care more about their pets than they do about the struggles of the majority of South African students, but one thing is for sure. This is not a mere protest or aÂ week-longÂ event. This is a revolution. A bloodless revolution that will finish what the blood-drenched revolution started.

Paul Kaseke is a sessional lecturer and research/teaching associate in the Wits School of Law where he studied his LLB, LLM and is now preparing to read for his PhD. He is a legal advisor and consultant with a keen interest in media law, group rights, governance and empowerment issues. He also comments on socio-economic matters and current affairs. He is passionate about the African agenda and is driven by the desire to build capacity in Africa and is involved in various student-driven initiatives, mentorship programmes and empowerment programmes for young people.