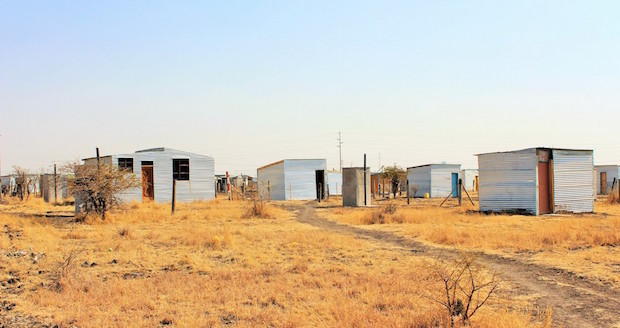 Until recently, I’d never been to Marikana. But a few days ago, I took the train to Pretoria, a shuttle to Rustenburg and a taxi to Marikana for the third anniversary of the events that saw 44 people killed during the August 2012 platinum miners’ strike. I didn’t get to see much of the place, as I was attending the memorial-turned-rally, so I went back again a few days later.

I wandered through the labyrinth of dusty roads and makeshift shacks of Nkaneng, the mushrooming settlement south of the Lonmin Wonderkop Smelter. Goats, cows, chickens, horses, dogs, donkeys and ducks – yes, ducks – roam about the shantytown and the people, like most small community folk, are friendly.

After meeting two miners who’d lived in Nkaneng for more than 15 years each, I stumbled across a small supermarket run by a couple of Ethiopian brothers, who’d taken over the shop from their older brother in 2013. We chatted for a bit, like good folks do, and I went on my way, passing a hair salon built from sheets of steel. It was the second one I’d seen. I was curious to see what they looked like inside, but the first one I passed appeared to be closed, and the second had shut down. On my second visit, I went to what the locals called the “new stands”, a newer area expanding far more rapidly than the snail’s pace at which government is building low-income housing in the area.

Over 15,000 people live in this 19-year-old settlement and it’s a wonder if the authorities will ever build enough homes to solve the problem of Marikana’s sprouting shantytowns. Cheap labour begets cheap housing. For as long as people are earning poorly, they will live poorly. In an ideal world, Lonmin would have built the houses its workers needed way back in 2007 – or in 1996 when Nkaneng first sprang up – but this is a world driven by the pursuit of profit, not charity.

And that money chase is also true for the mineworkers who migrate from as far as the Eastern Cape, Mozambique and Lesotho, to risk going underground in order to earn a better living. That’s what Thomas, the opencast miner who didn’t earn enough, was planning to do.

Thomas was the chatty Xhosa man whose yard I’d gone into to ask for directions, in a futile attempt to find house number 8611 in the “new stands”, a place where the numbering pattern presents a complex puzzle even to those who live there.

Thomas and his mates couldn’t help me find the 8’s, but they pointed me in the direction of the 5’s and the 6’s where, after almost two hours of searching, the blazing sun eventually drained me of all my strength. I walked back to the dusty main road, a tired and thirsty soul. Glancing back at the ever-expanding “new stands”, I sighed. There seemed to be no end to these rows and rows of steel roofs, the skyline of South Africa’s housing crisis.

– All images by Tendai Marima