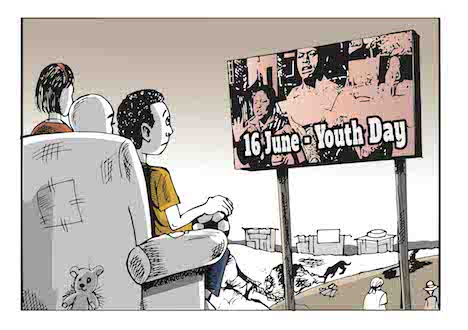 This Youth Day, the journalism project formerly known as South African Votes 2014 is relaunching as The Daily Vox. In what started as an attempt to drive the election story though the voices, ideas and concerns of the citizen, The Daily Vox will put the citizen at the centre of news.

Even then, ourÂ young journalists will seek to find, curate and amplify the voices of young South Africans caught grudgingly between the drudgery of old politics and new protectorates.

Whereas the young are often at the periphery of traditional media, they are our priority. Not the officials and the experts but the people; be it the city centre, urban peripheries or the rural heartlands.

While conscious of the importance of the sacrifices made for us by the Class of â€™76, we will try to avoid the handwringing and head nodding that emerges every Youth Day, Heritage Day and Womenâ€™s Day.

South Africaâ€™s young people are hazy on the past, sanguine on the future, and spend most of their time dealing with the reality their elders have left them.

The so-called born frees may not have the political consciousness of their predecessors but their struggles are more unclear, their anger far more incendiary, for their struggle is often regulated by the currency of recent liberation.

We remember Hector Pieterson â€“ from pictures, textbooks and speeches mainly. More immediately, but already forgotten, is the six-year old boy who drowned in a pit toilet at a school in Chebeng village, Polokwane, earlier this year, the four children who got lost looking for their parents and died of starvation in Verdwaal in the North West two years ago, and the half million starry-eyed scholars who started school in 2002 and dropped out before they even reached matric.

Itâ€™s easy to feel sympathy for a six-year old, and easy to avert our eyes from a 26-year old hustling on a street corner, washing windows for small change.

We remember Hector Pieterson. But today, instead of telling people to remember the youth of â€™76, we will ask them to listen to the youth of 2014, who struggle daily to find their way in the imperfect world we’ve handed them.