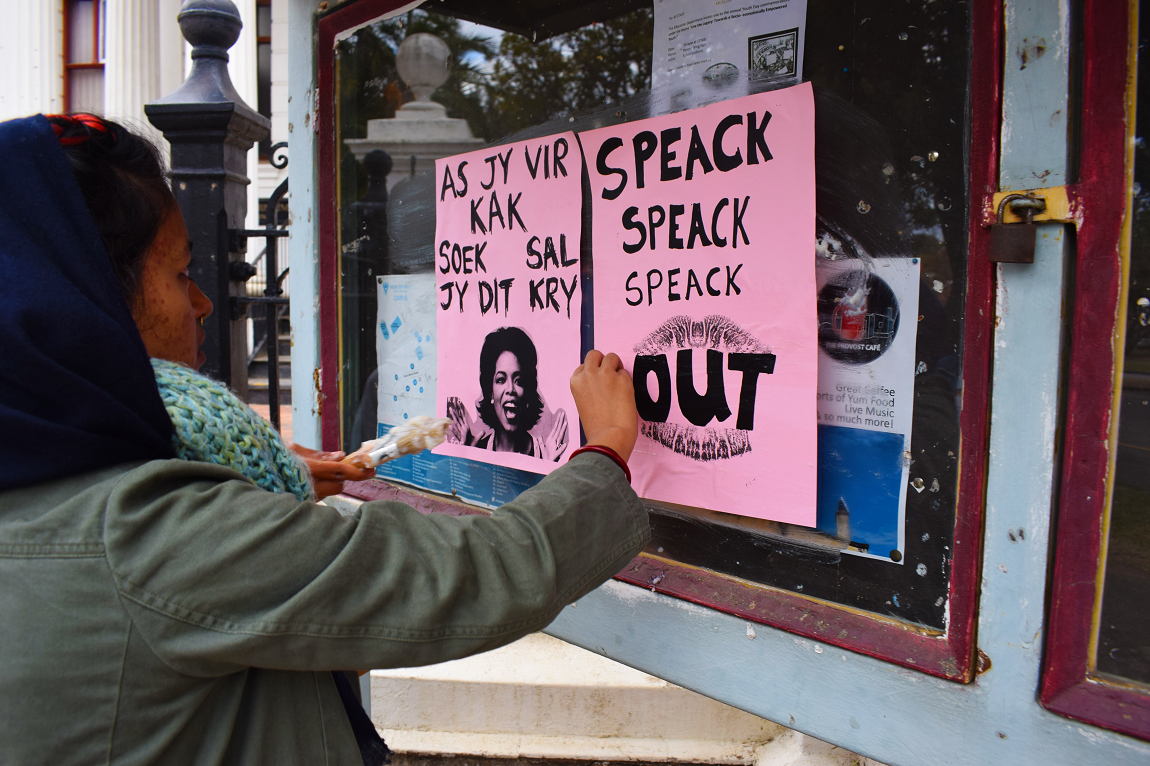 Stationary and paper clippings litter the floor of the Rhodes University Fine Art Department. As you enter, you are greeted with gentle music and chatter, the occasional whir of a photocopy machine and empty birth control pill trays strung from the ceiling. About 25 students sit among the clippings as they work on creating their posters. The occasion is a Women’s Day Poster Making Workshop run by BACK. TALK Womxn’s Collective and Indian artist and activist Aqui Thami. By ALICE DRAPER.

“The workshop aims to create a safe space for creative healing and speaking out against Sexual Violence within the University and the global South,” reads the Facebook event description.

Students participating in the workshop were encouraged to use the poster making process as a way of reflecting on the events from the past week. This includes the National Women’s March and the suicide of a fellow student and rape victim Khensani Maseko. These posters were then photocopied onto A3 paper and pasted around campus as well as the streets of Grahamstown/Makhanda.

“My work is all about talking about how you feel,” Thami explained.

Thami is known for her posters and stickers that she distributed around the city of Bombay where she currently resides as an artist. Many read “A woman was harassed here”.

Her intent is to cause disruption.

It was through Thami’s Instagram page that BACK. TALK were able to find out about her work and invite her to UCKAR.

BACK. TALK Womxn’s Collective was recently founded by UCKAR students Erin de Kock and Carol Nelson. De Kock explains that the collective was started as a way of keeping the conversation of rape culture alive as well as creating a platform to actually do something rather than simply talking about gender based violence.

Following Maseko’s suicide, UCKAR came to an academic stand still for two days. This time was spent mourning Maseko and reflecting on sexual violence on campus through numerous talks. The Poster Making Workshop differed from the previous events of the week by providing a safer and less triggering space. UCKAR student and participant at the workshop, Lilly Quin, reflects on this.

“In a week that felt so emotionally-taxing and brutal as a woman, particularly on Rhodes campus, the poster making workshop was the only space that felt safe,” she explained. “It gave me a productive outlet for my anger and emotion.”

The posters were put up on the wall of the Fine Art Department and an exhibition was held the evening of Women’s Day.

Alice Draper is a journalism and politics student at the University Currently Known as Rhodes (UCKAR). When she isn’t behind her laptop you may find her experimenting in the kitchen, trying (often in vain) to keep her veggie garden alive or drinking wine with a friend.