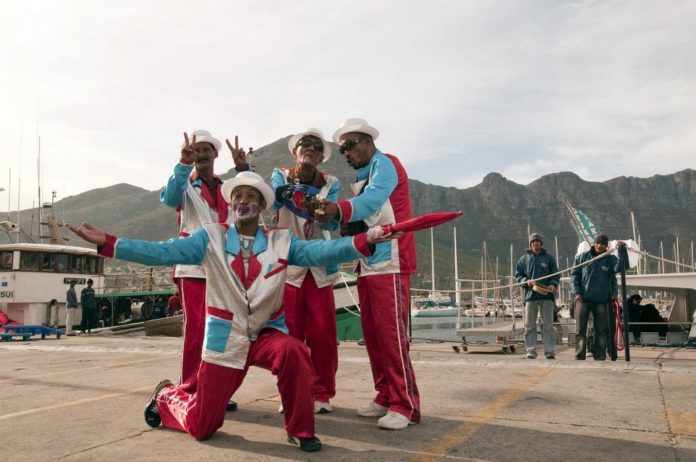 The annual Cape Minstrel New Year Parade has taken place every year on the 2nd of January through the streets of Cape Town’s CBD. It is rooted in a slave tradition. Spectators line the pavements to watch the parade each year. The pandemic may cause that next year’s parade to be cancelled for the first time since it started formally in 1907. It is a huge dent in the tourism revenue for Cape Town. Let’s take a look at its origins before and after slavery ended.

Read more: “Sacrificing one year of the minstrel parade so we can live to see many more in the years to come”

The earliest mention of a parade was in 1823. At New Year time slave-owners gave their slaves a holiday. In pre-emancipation days, bands of slaves paraded through the streets at dawn on January 1. It was a time when the slaves could sing, dance and be free for one day.

In 1834 slaves were freed in South Africa. On the 1st of December at midnight the free people took to the streets in celebration. It became a day of celebration and later moved to the New Year, the original slave holiday. This went into the next day giving us the famous Tweede Nuwejaar (second New Year) name. It was also used as a showcase for the Coloured dance bands, who would play their music through the streets of the Bo-Kaap and District Six.  The famous Cape Malay and Minstrel bands became more organised in this era.  Singing clubs were being formed all the time. The Afrikaans term for Coons was “Klopse”, and this came from the word “Klubbe” (clubs). After emancipation these bands start playing for the high society people in Cape Town.

In the late 1800’s African-American bands toured the cape. The locals started picking up the songs and styles they heard at these concerts. Many historians note that this is where the word Coloured started being used amongst the local folks.  It was from these troupes that locals adopted the colourful costuming. Also unfortunately the blackface make-up. In later years it moved from blackening their faces to using colourful make-up. There was even something called ‘rainbow balls”, which had “masters” and “servants” mixing in dance halls.

One of the most iconic carnival troupe songs “Daar Kom Die Alabama” is said to have been inspired by the visit to the Cape of the Alabama in the 1860’s, a US Confederate ship

The first parade competition was held at the Green Point track in 1907. Troupes used to perform on the old Woodstock beach before this. There were two kinds of groups back then. The coons, who blackened their faces and danced.  The privates  were sport club members who wore fancy dress and were led by brass and string bands. They marched in ranks like soldiers.

The Cape Minstrel Carnival was borne of the emancipation of slaves. It continued through wars, Apartheid and into a democratic South Africa.  Former president Nelson Mandela arrived in a helicopter donning a satin minstrel costume in 1996.The former president famously said the country’s Coloured community belonged to the majority and their rights were protected in the constitution. It has become a long-standing tradition that embodies the often time ignored slave history of South Africa. Like many other local celebrations the Covid-19 pandemic may force its cancellation, but it has proven to stand the test of time.