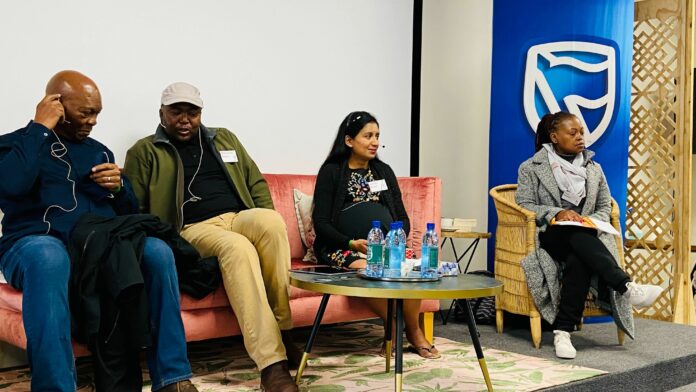 In Mandla Langa’s The Lost Language of the Soul, the author weaves a powerful story. It is a story about a search but it isn’t just any search. The book takes place during the 1980s in Southern Africa moving from Zambia to South Africa. The book is about Joseph’s search for his parents but also for his own truth and identity. It was therefore apt that Langa was on a panel called Soulful Reflections of the Past. This was at the Kingsmead Book Festival (KBF).

Joining Langa was Mphuthumi Ntabeni, author of The Wanderers and Nerisee Marais, author of My Cousin Brother. Writer Sue Nyathi moderated the panel on an examination of the human need to tell stories of the past. Nyathi is the author of A Family Affair amongst others. She has also recently edited an anthology, When Secrets Become Stories.

The 2022 edition of the KBF was the first in-person edition of the festival since 2019. Despite the cold and rainy weather in Johannesburg on May 21, the festival was buzzing with readers and bibliophiles alike. There were many fantastic book sessions for attendees with discussions between authors who had released books in the past couple of months. The festival was filled with a little bit of everything. There were activities and discussions for children and teenagers. Then there was the Culinary Corner which had chef-authors whipping up delicious treats for attendees. However, the main programme drew the most attention. There were discussions centered around politics, romance, storytelling, sports and much more.

The Soulful Reflections panel looked at the past and what role storytelling plays in keeping those stories alive. All three of the featured authors’ books were set and centered during apartheid – even if they dealt with different subjects.

Langa’s book is a story of Joseph, a 14-year-old boy living in Lusaka, Zambia. His father is a freedom fighter and is often away from home which the family is used to. However, the book takes place around the events that occur when Chanda, his mother, disappears one day. Joseph decides he needs to find her and his search takes on a journey of truth and discovery.

Ntabeni’s The Wanderers is similar to Langa in terms of a young person’s search for their parents. The book is centered around Ruru whose father Phaks, joined the anti-apartheid struggle in exile before she was born but never returned, preferring to stay in Tanzania. Years later, though he has passed away, Ruru goes in search of signs of his life in his adopted country. She finds it in his widow and his ‘pillow books’ – journals he kept, coming to terms with his mortality.

Marais’ book focused on Chatsworth in the 1980s and follows the personal journey of a young lady during apartheid. It is a book that deals with coming of age, the political upheavals of the time and a young person trying to find her voice and speak up for justice.

During this discussion, the authors also touched on various aspects of their books from the characters, their research process and where the idea for the story came from. As mentioned, the authors all have very different writing styles and the books are different. However, the one thing that binds all their work together is understanding what the past was and the effect of apartheid on the three young protagonists of their books. Through understanding these young people and their journeys, they were able to paint a picture of the past and what can be learned for the future.

The authors also explained the inspiration for the book titles. Langa said his book title refers to the experience of being rootless while still being rooted. It is also about trying to reconcile different parts of life and trying to find meaning. For Marais, her title was inspired by the expression used in her community of the family member – mostly a cousin – who is so close to a person they are considered a sibling. The Wanderers was inspired by the clan that Ntabeni is part of – the amaMfengu clan. The amaMfengu were dispersed and displaced several times and they became known as the blighted wanderers.

In both Langa and Ntabeni’s books especially, there is a sense of trying to ensure neglected histories and the silences around some parts of histories are amplified. In Langa’s book it is about the freedom fighters who were in exile in other African countries while for Ntabeni it is about the people who were in South Africa during the 1980s and didn’t go into exile.

Above all the panel discussion and the books showed that part of moving forward and forging new paths and ways forward means reckoning with what happened in the past. It is about understanding it, discussing it and writing about it – ensuring that it stays in the national consciousness.