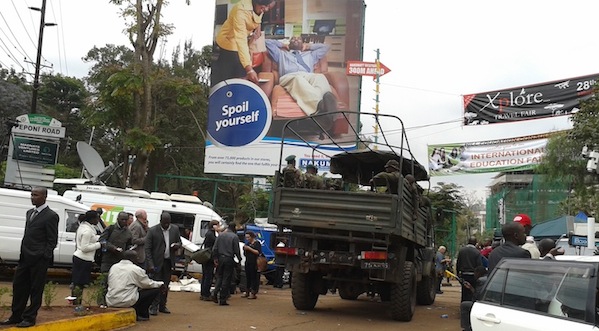 The radio station I work for, East FM, was hosting their first ever Junior edition of an annual cooking competition. Each team had three members, aged 8 to 16. It was round two of four that Saturday. I arrived early for duty. People from all age groups were there. Around 24 kids and their friends and family members. A good turn out. It was an exciting moment as the judges were revealing the challenge â€“ a hot desert and a cold starter. I remember the kids mouthing questions from a distance to their mums, asking for advice, and the mums sitting across the barriers trying to advise them without the judges noticing.

The countdown for the first challenge started at 11.50am. At around 12.35pm, we heard an explosion from inside the mall. The second floor had a food court and we assumed it was a gas cylinder. Then two more explosions went off and people started running out of the mall. We ran out of our tent to the back of the parking lot we were on.

Gun shots rang out. Countless gun shots. It sounded like it was coming from the main road. I managed to send my mum a quick text: Gun shots. Like 100 shots. In Westgate and around the area. Everyoneâ€™s panicked.Â And weâ€™ve all ducked down in a corner.

People started screaming and I got carried away with the crowd who were trying to find a way to escape. Most started to jump off the rooftop. They were shot at while jumping. I donâ€™t know if they made it.

Most were going through a vent. People started going down to the exit of the mall.

One by one. I got pulled down behind a white car by an older Indian man with his wife. It had bloody-finger marks on the door. I have no idea who they were and no idea what happened to them.

I blanked out at this point and opened my eyes to smoke. A grenade was thrown at us. The grenade blew up. It tore a man into pieces. Others had shrapnel in different parts of their bodies.

Stuck now. ThreeÂ teenagers on top of me. TwoÂ young girls, fiveÂ or sixÂ years old, under me, with their mum next to them. She rang her husband to say she loves him and may not come back home today; it triggered me to call my mum. She was so confused.

I donâ€™t know whatâ€™s going on but it doesnâ€™t look like Iâ€™m coming back home alive today so Iâ€™m just calling you to say I love you.

She thought I was joking with her; then she heard the gun shots and I hung up.

One of the girls with me was probably stronger than I was at that point. She told me to pull myself together and we started reciting the kalima (a Muslim declaration of faith) together. Over and over again. Louder and louder.

My brother called back trying to support me, telling me to stop panicking and get everyone to take care of the kids; to hold their hands and calm them down. He and mum stayed on the phone throughout the whole ordeal.

There was complete silence at one point. The sun was out. The sky was clear. It was a beautiful day.

After almost two hours, a Caucasian man approached us quietly and said heâ€™s security and here to help us. I felt instinctive trust and sense of relief. My adrenaline kicked in too. He showed us a way out, through the Java coffee shop kitchen. I managed to have a quick chat with him, asking him who he is and what was going on. He just said heâ€™s security and needs to get us all out of here.

I was the first one to go down the stairs. I met an Asian man at the bottom; he pointed his gun at me. I thought he was going to shoot at me, so I put my hands up. He asked me how many there were of us, and I said â€œToo many.â€ He told me to go down to the next level, take a right and a left and run.

I got out. Unhurt.

I told my brother, who was still on the phone, that I got out and hung up.

A stranger gave me a ride home. His name was Suraj. I havenâ€™t seen him again. His friend was at Dormanâ€™s, a coffee shop on the first floor outside the supermarket, Nakumatt, when it started, but got out. They were waiting with me in an apartment block that we took shelter under. So we had plenty of time to talk. The cops wouldnâ€™t let us out until further notice. I didnâ€™t get home until around 4pm. I collapsed in my mumâ€™s arms and burst into tears.

They say when you give sadaqa (charity), you lessen risks or harm in your life – something like “you give and you receive”.

That morning, for some reason I had stopped and bought milk, bread, rice and cooking oil to give away as sadqa to a disabled man right across from the Westgate Mall. I hadnâ€™t done that in a very long time. Now it seems so prescient.

It surely feels like I was given a second life.

We did group counseling with the East FM team but I got my own personal counseling from a trauma specialist, Jenetta Barry, who provided me with some powerful techniques to assist me transcend my overwhelming trauma.

I still get flashbacks. Loud bangs still freak me out. The waves will always be there. I always look for exits when in malls. Always aware of whoâ€™s around me. I also find myself attached to situations like the Malaysian Airline going missing, the Gaza invasion. Only because I know that feeling of helplessness. Not knowing if youâ€™ll ever see your family again. It may not be the same thing. Everyoneâ€™s experience is different. But being able to empathise makes you feel more attached to such situations.

I haven’t been inside Westgate since then. The Mall still stands tall but is sealed off to the public.

Life since the Westgate attack has been different. My friend circle got reshuffled. My goals for life changed. My relationship with my family got even better. Living each day in the moment has become a norm – not fussing about the past and not focusing too much on the future as well. Creating a better now is a must, because you really never know if youâ€™ll get to see tomorrow. SadiaÂ Ahmed is a copywriter, producer and presenter atÂ East FMÂ in Nairobi, Kenya.Â She also runs a weekly lifestyle feature on the music stationÂ XFM. ReadÂ her blogÂ or follow herÂ on Twitter.