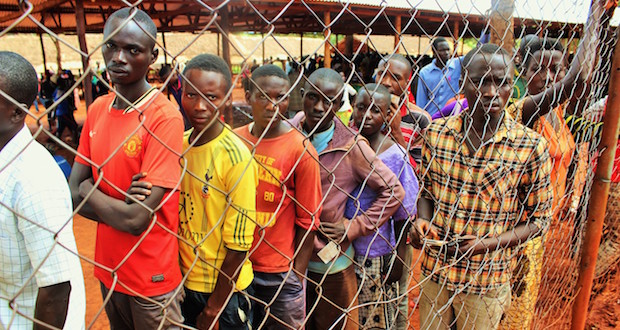 Since April, tens of thousands of people have fled the ongoing violence in Burundi which has seen more than 300 people killed and 240,000 fleeing to neighbouring Tanzania, Uganda, Rwanda and the Democratic Republic of the Congo. FELIX NIYOMUNGERE told Tendai Marima how he fled Burundi and came to the Nyarugusu refugee camp in Tanzania, which in the last eight months has become the third largest refugee camp in the world.

I am an orphan. Both of my parents were killed in Burundi’s violence some years before this trouble and I have no one. My father had died before I was born and my mother was killed in 2011 by my paternal uncle. He was a strong member of the CNDD-FDD, the ruling National Council for the Defence of Democracy-Forces for the Defence of Democracy, and there was an argument in the family. Â He shot my mum and my uncle because they would not support his party and they wouldn’t allow him to take over my father’s land in Bururi,Â a settlement about 70 km from the capital, Bujumbura.

At that time there were a lot of political problems and these things became part of our family situation, especially because he was the oldest brother and he felt he should take the farm. Nobody in my mother’s family supported CNDD-FDD, but they are the government, so what could we do? I was very young then.Â It was hard to lose my mother, but there was nothing I could do.

After she died, I was looked after by my mother’s relatives, but now I’m 21 and I have to survive on my own. I moved to town after school and I used to make money carrying people’s luggage at the bus stations in Rumonge, a town in the south-west, near Lake Tanganyika. I lived with a neighbour from my rural home, but when the fighting became really bad in Rumonge my neighbour ran away and I was left alone.

I didn’t know anyone there and it was getting dangerous to stay on my own, so I ran. People would ask where I belonged and who I was fighting for. Some would tell me I must join Imbonerakure, theÂ CNDD-FDD’s youth wing, or they would send them after me, but I couldn’t. At night they would go into houses, stealing and beating up people I knew, and I couldn’t be part of that. SoÂ I decided to run.

I followed other people who were leaving and we walked through the bush and the small villages for two days until we met a driver who gave us a lift across the border.

I arrived in Manyovu, Tanzania, on 25 September. It’s a day I will never forget. After a long time of feeling scared, I finally felt safe.

Even if life is not very good in the refugee camps, I can’t go back. I don’t think I have any family to return to and the woman I’m staying with now in the UN camp is the only person I have. She’s an older widow with two small children and although they don’t have much, she took me in so I cannot leave.

I miss my home in Burundi, but as long as there’s fighting, there’s no life for a young person. I will stay here.

– As told to Tendai Marima