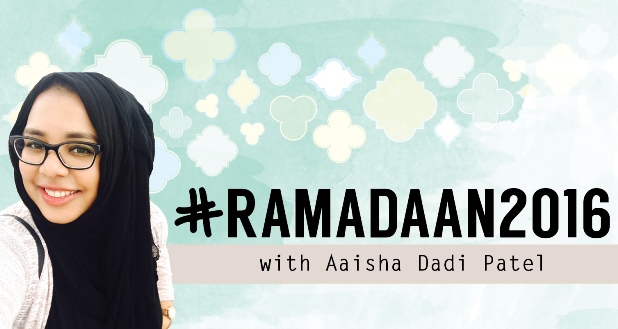 On Tuesday, my friend Naadira invited a couple of friends and me to her house for iftar (the meal we have upon completion of the fast), and to visit Bosmont Masjid for Taraweeh (more on that below) after with Mufti Menk. She lives in Newclare, which is a couple of streets away from the mosque, and I was really excited to 1) get to spend a bit of time with my friends, all of whom I know since school and 2) read salaah behind Mufti Menk and hear his live tafsir afterwards (critical examination and explanation of verses from the Quraan).

After a lovely meal (which I was late for, because I am who I am), we bundled up into the car for the three-minute drive to the mosque, and took our places in the ladies’ section. During Ramadan we have a special extra nightly prayer called Taraweeh, which is twenty units of prayer that we read after the obligatory Esha prayer. Taraweeh is not compulsory as the other five daily prayers are, but as it is a sunnah (practice of the prophet Muhammad SAW), it holds great extra reward for the one who performs it.

During Taraweeh, congregations usually try to read slightly long sections from the Quraan every night in order to complete the Quraan by the end of Ramadan. Certain verses are extremely impactful, and while that’s usually a subjective thing (and while, of course, the Quraan in its entirety is super impactful) the verses in Surah 55, Ar-Rahman, invoke a true emotion, especially for me. It was one of the surahs recited during our Taraweeh.

which translates to, “So which of the favours of your Lord would you deny?”

I’ve mentioned before how I thought myself so lucky to have heard it recited during Fajr salaah when I went to Al-Aqsa in Jerusalem, and I was extra happy because I don’t go to the mosque very often so I was so pleased to have had the chance to read it out on this visit.

Mufti Menk’s recitation of it during Taraweeh was absolutely beautiful, giving me goosebumps even though I was in a tightly packed, warm space. Mufti Menk is an internationally-renowned Islamic scholar, originally from Zimbabwe, and his talks and sermons are always widely attended and widely circulated, the world over.

After we completed Taraweeh, Mufti Menk gave a tafsir on verses from Surah Maryam, and reiterated the importance of being mindful of speech, and being mindful of keeping good company. He also highlighted how important it is to always stay mindful of death. In the company of my friends, who have been by my side for such a long time, I felt so at ease and at peace in that moment, and I pray that we are able to have and maintain these kinds of relationships that Mufti Menk is talking about.

But before I end off – praying Taraweeh at Bosmont Masjid is very different to praying at Houghton or Greenside (other mosques where I have prayed). The experience reminded me a lot of my time in Cape Town, particularly due to the style of dhikr recited in between. Besides just that, though – the sense of community is palpable, and the overall vibe is just different. It was a really beautiful experience, and I’m so thankful to Naadi and her mum for inviting me to get to be a part of it.

This is a special Ramadaan series by our fave Muslim reporter, Aaisha Dadi Patel. For Day 23’s musings, click here.