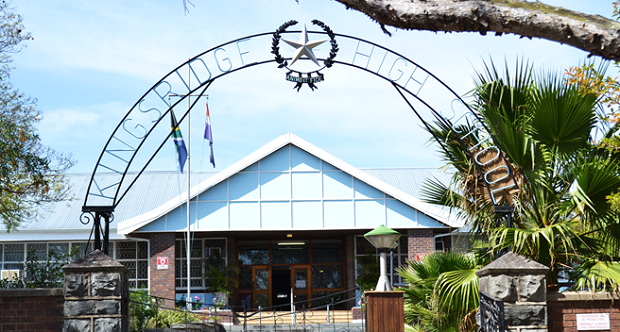 All over South Africa, young black people are finding their voice and realising that theyâ€™ve been putting up with a racist colonial system for far too long, and, actually, they can fight it. It is black people, women especially, who are young, rebellious, loud, unashamed, proud and completely fed up. CHLOÃ‰ OSMOND refuses to be silent about what she has witnessed at her alma mater.

I went to a school in the Eastern Cape called Kingsridge High School for Girls (KHS), previously Kaffrarian High School. I have been putting this article together for some months now, but in light of what is happening at Pretoria Girls High, I thought it might finally be time to publish it. It must be clear that this is not an attack on my school in isolation but on a pervasive problematic system in South Africa which desperately needs to be addressed. This is not me calling KHS out selfishly; this is me refusing to be silent about the things â€“ the inexcusable things â€“ that I have witnessed. I canâ€™t pretend to fully understand, because I benefit from the system, but I, a white person, know my privilege, so if I do nothing to draw attention to these issues at least, I am only contributing to the bigotry I despise.

The problems lie in the little, subtle things – but they are everywhere. Itâ€™s in the administration. My school, at which I was one of only 20 white girls, is run by two older, white gentlemen with little understanding of the schoolâ€™s context and how to deal with it. The female staff are always frustrated with the way they are treated but never retaliate as they would only be met with patronizing dismissal.

Itâ€™s in the houses too â€“ Frere, Milner, Durban and Grey â€“ literally named in celebration of colonial administrators. Every Wednesday and Friday, the school is lined into neat, colour-coded blocks of subtle oppression and made to sit quietly and cross-legged on the ground, beneath flags that celebrate the men who stole their land and killed their forefathers.

Itâ€™s in the language policies. I consulted a close friend, a black female and ex-pupil a the school. She said, â€œIn Senior Primary, we used to get in trouble if the teacher even heard a click in class â€“ we were strictly not allowed to speak Xhosa at school.”

â€œAt this school we speak English. You can go speak Xhosa in your home,â€ is a commonly heard utterance â€“ one to which I paid little mind for a long time â€“ â€œwhy canâ€™t they just learn, like I did? English is, after all, a universal language, no?â€ So I breezed through all my subjects because I understood, leaving the other girls behind me â€“ girls who spoke three or four beautiful languages before English. Tricked by this idea that speaking English is oneâ€™s most important mission at school, girls made fun of each other for speaking with an â€œaccentâ€, reading slowly, or â€œmispronouncingâ€ words. Oneâ€™s intelligence was measured by how â€œwhiteâ€ one could sound.

Our uniforms were unflattering (for anyone not slender and of average height) A-line dresses, ankle socks or stockings in winter with white collared shirts. Our hair bands, earrings, watch straps and hair must all be of a particular style and colour. White watches, we were told, are too â€œfashionableâ€ for school.

Avoiding “fashionâ€ was used as the excuse for banning a lot of things. Like dreadlocks. Thick corn rows. Tying oneâ€™s braids in buns. Allowing oneâ€™s hair to grow in a large, healthy afro. Every black girl has a story to tell about being told her hair is too casual, not appropriate for school or untidy.

The student I consulted added that there is unfairness in what is culturally accepted. A Muslim girl can observe hijab by wearing a headscarf and long pants, but when a black girl needs to wear ceremonial beads, â€œitâ€™s all of a sudden not allowed for you to have your cultureâ€.

At the matric dance, the girls who expressed themselves in a masculine manner donned long hair and wore dresses. The queer girls hunted for male dates. Pants and female dates were, as far as we knew, not allowed, or at the very least, not accepted.

The strict rules extended to civvies days too. On the two days a year we were allowed to wear our own clothes to school, we received a list of stipulations including that we were not to wear makeup, or anything too short, or anything that shows cleavage or reveals any underwear â€“ we wouldnâ€™t want to distract the male staff – and, I wish I was joking, one rule stated: â€œknow your body type and dress accordinglyâ€.

This is the most literal example of how we were expected to conform to a standard â€“ a standard of whiteness, a colonial standard, a standard of thinness, a standard that says there is only one way to be beautiful, a standard that would hide our bodies from the men who are supposed to lead us â€“ and if we did not conform, we were punished. The saddest part of this was that it was often women of colour who were made to enforce these rules on the students.

There was even policing of womenâ€™s behaviour. We were expected to be â€œladiesâ€ in public. This, of course, meant â€œacting whiteâ€. The black student I spoke to reports that when girls started to sing traditional African songs, â€œgwidjasâ€, they were looked at as if they were starting a riot. The singing of these songs was permitted at sporting events but with absolutely no dancing. The African way of celebration and expression was snuffed out.

Assimilation remains the unspoken ultimate goal at Kingsridge High School. Assimilation means acceptance from the students and staff, means success, means staying out of trouble. I would argue that the effects of colonialism and discrimination are minimal at Kingsridge, purely because the black women at this school have refused to be oppressed. When I was a school prefect, it was difficult not to see their rebellion as senseless refusal to follow reasonable rules, but I now understand that they were subtly and stubbornly resisting the system that is trying to force them to leave their blackness behind them. However, in many cases, at schools where black women are in the minority, I fear the spirit of assimilation has won.

Of course, the school provided me with an excellent education and many wonderful opportunities. I encountered many wonderful people â€“ staff and students. But it is unacceptable to take these things in isolation and turn a blind eye to every injustice.

In response to this system, young women must stand together. We must revise our rules â€“ think carefully about the message each individual rule is sending out. We have to uplift women, destroy oppression and colonial superiority, encourage pride and allow black girls to express their blackness. We need to understand the nuances of white privilege and the colonial system and realise the necessity for transformation. We cannot continue to ignore oppression or be indoctrinated to conform. Resistance is essential. And as long as resistance is occurring, I, for one, will pledge my solidarity.

This post originally appeared on ChloÃ© Osmond’s blog and has been republished with permission.