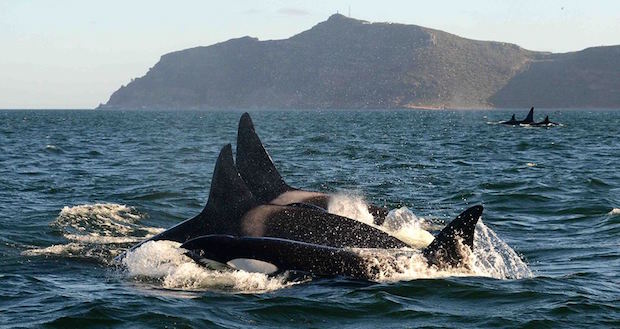 One of the largest pods of killer whales, or orcas, in South Africa was spotted off the shores of Simonâ€™s Town this week. AAISHA DADI PATEL spoke to a skipper at the boat company that spotted them.

On Monday the Simonâ€™s Town Boat Company, which specialises in boat cruises to view marine life, spotted a pod of orcas about four miles off the coast of Simonâ€™s Town.

â€œItâ€™s always so special when we see them,â€ said Dave Hurwitz, a skipper at the boating company. â€œItâ€™s not common, and they seldom come on shore, so this is really such a special occurrence.â€

Hurwitz said the boating company was tipped off to the presence of the orcas by a Simonâ€™s Town resident who had spotted the pod. A boat was in the water and on site within 25 minutes, perfectly positioned to see and snap photos of the 17-strong pod.

According to Hurwitz, the orcas have made an appearance for just a few days each year since 2009.

â€œWe suspect that theyâ€™re feeding,â€ said Hurwitz. â€œThey arenâ€™t hunting dolphins or seals though, even though there are plenty of those in the area where they are. Thereâ€™s also a lot of squid and Cape salmon, so theyâ€™re probably eating those up!â€ The sighting provided a unique opportunity to view orcas in their natural habitat, rather than in captivity.

The release of the 2013 documentary Blackfish exposed the conditions under which orcas are kept in captivity and the impact this has on the animals. Since then, new questions have been raised about the ethics of separating the intelligent mammals from their pods and holding them in captivity.

Attendance at Seaworld, the marine theme park featured heavily in Blackfish, reportedly dropped 5.6% last year its stocks dropped from $26 to $16 after the documentary was released.

Hurwitz said he believed Seaworld and other organisations like it should be “shut down.”

â€œI absolutely disapprove of any form of animal imprisonment, which is what that is. There are enough opportunities to see marine animals existing in the wild, which is where they belong,â€ he said.