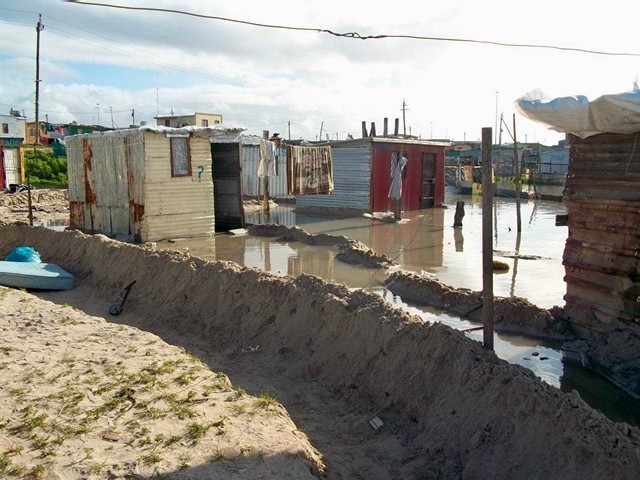 Each winter, areas in Cape Town flood uncontrollably. Formal and informal housing across Cape Town are subject to flooding. The worst affected areas are the traditionally designated Apartheid spatial planning areas, and informal settlements. We look at why the disaster management solution is not feasible. Instead formal housing and redesign are the much-needed long-term solutions.

Since June 28, heavy rains in the Western Cape have affected over 6000 people. The City of Cape Town said many low-lying areas experienced localised flooding. Disruptions to the stormwater and floodwater management resulted from unlawful occupations across the city, and affected adjacent roads and “formal suburbs”. More rain was predicted in the coming days and would likely have the same effects.

In response to the rains that caused flooding in informal settlements at the end of June, the city said it cannot help legally. Instead the city offered DIY tips for those faced with flooding on alleged illegally occupied flood plains.

Human settlement mayoral committee member Malusi Booi said that the increase in “unlawful land occupations” have led to the establishment of new settlements in many parts of the metro.

Booi said,”More than 70% of all recent occupations have happened on land that is not suitable for human settlements. The City expects there to be increased flooding incidents here this winter.”

JP Smith,the city’s mayoral committee member for safety and security, said most of the flooded areas are new and unlawfully occupied since last year. Smith said the canals are clogged from dumping and littering, and get worse in severe weather. “The settlements are built on land where rivers and canals would usually be, where water floods naturally. There is no engineering solution for this, only preventative disaster management,” Smith said.

Read more: If you’re struggling you may be eligible for relief on your municipal bills in Cape Town

“We have informal settlements today due to the failure of the government, both local and national, to address the housing needs of the majority of the people of this country. If you register on the housing database, you don’t know when you will receive anything,” Mgwatyu said.

Smith’s comment about no engineering solution alludes to a solution. If the city can only be reactive to disasters in informal settlements.

The city of Cape Town tried to upgrade Imizamo Yethu through a “super-blocking process”, building a road and providing proper amenities for water, electricity and sanitation. It took away the livelihoods of many informal residents who were landlords of large or multi-room shacks.The city did not account for how the land had previously been used to earn an income. Local government needs to involve the community, and understands how it operates informally.

There have also been calls to adjust disaster management models after flooding of informal settlements along the Jukskei River in Alexandra Township, Gauteng. Conversations around climate-related disasters often fail to intersect with political, social and historical factors.

Johannesburg’s local government goes to great lengths to prevent inter-communal conflict in the event of disaster. For example, handing out blankets to neighbours not affected by flooding to prevent tensions. Then providing housing materials to rebuild, knowing the location is always prone to floods. Traditional choices in disaster management are short-term at the expense of long-term risk reduction.

Currently, the City of Cape Town only allocates housing to people who are only legally registered beneficiaries that are able to get state-assisted accommodation. This is according to the Allocation Policy. Registered beneficiaries must deal directly with the city. It has been reported that there are around 146,000 households in 437 informal settlement pockets in Cape Town.

Read more: Why The Tafelberg Case Is Key To Stubborn Apartheid Spatial planning in Cape Town

This interactive map displays the borders of the informal settlements within the City of Cape Town. LINK

The deadline for public comments on the Western Cape’s draft housing policy was on July 13. Ndifuna Ukwazi asked who will actually benefit from the policy, and called on the public to add to it – and send a message that affordable housing should be a priority .

“Twenty-seven years after the dawn of democracy in South Africa, the development of housing in the Western Cape continues to develop along apartheid lines. Segregation and exclusion are still the most persistent barriers to equality and justice in Cape Town,” Ndifuna Ukwazi researcher Robyn Park-Ross said.

The Western Cape Property Development Forum (WCPDF) is one of the organisations that have commented on the policy.

“Our organisation has always supported the principle that all people have a right to well-located accommodation that brings them closer to economic activity and addresses spatial injustices of the past” says WCPDF chairperson, Deon van Zyl.

Rockland Villas situated in the affluent suburb of Sea Point in Cape Town was recently acquired by the Department of Human Settlements. The department said it will make it possible to respond to the housing needs of the City of Cape Town, and redress the spatial segregation. Ndifuna Ukwazi welcomed the acquisition, and said public assets should be used to develop public and affordable housing.

Examples from other countries

Ecological redesign has been suggested in Latin America’s informal settlements,where residents are most at risk for climate disasters. Structural changes have to be implemented like increasing permeable surface areas. This can prevent flooding and increase access to water. In Argentina only 24% of informal settlements include a green space like a park. These green spaces would be ideal to implement structural change; like growing vegetation and paving roadways. In Venezuela, the suggested solution to lower the flooding risk is to  stabilise the terrain and garden spaces.

There are multiple solutions available to be explored in ensuring a dignified, affordable and safe dwelling for those who need it the most.

Read more: What exactly is ‘spatial apartheid’ and why is it still relevant?