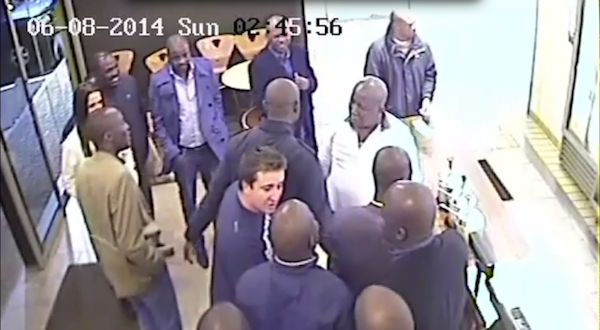 EFF leaderÂ Julius Malema is back in the news , this time for an altercation with a patron at a Steers eatery in Tzaneen, Limpopo.

Footage of the alleged assault was circulated via an unlikely source – the Afrikaaner lobby group, Afriforum. The group posted surveillance footage of the incident online on Wednesday. On Thursday, Afriforum deputy CEO Ernst Roets said the groupÂ will be assisting Cassie Moller, the man involved in the incident,Â in pressing charges against Malema.

Roet said the reason for the delay between the incident, which occurred around 2am on 6 August, and Moller pressing charges was due to a problem getting the footage from the eatery – Afriforum’s lawyers filed a Promotion of Access to Information (PAIA) application to get the footage. (For reference, such applications are usually used to force government to part with information it’s tried to keep secret. It’s been used, for example, to get details on stateÂ spending atÂ Nkandla.)

After the footage started doing the rounds on social media, Malema tweeted that heÂ “was attending to a bully”. The tweet he has since deleted but the EFF confirmed in a statement that the incident had occurred.

Moller says he’d been called by his wife to find out why their food order for two small burgers was taking so long – the couple had waited about 15 minutes for their order. “I explained to them that we had been waiting for a long time and that I wanted to know why the order was taking so long,” he says in an affidavit.

But according to the EFF, Malema witnessed Moller “shouting F*** and K***** words at black female workers”.

“The CIC will never apologise and the EFF stand firmly with him; black dignity has long been degraded by centuries of slavery and colonisation,” said the party.

The security footage does not include sound, so without testimony from witnesses who were present during the altercation,Â it’s unclear whetherÂ this case will ever go beyond a simple he said, she said scenario.