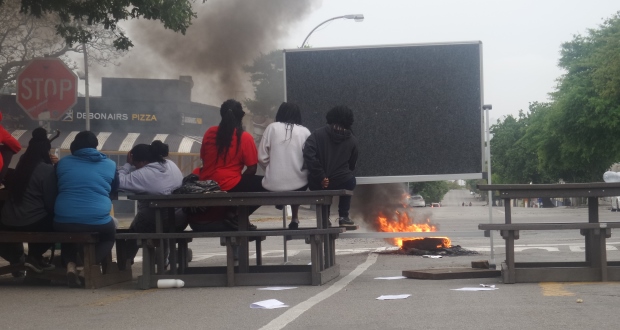 At the end of a week of complete academic shutdown by #FeesMustFall protesters, the University currently known as Rhodes finds itself in a strange position. STUART LEWIS explains.

University management has conceded to all the demands of the student protesters and, after what a University statement called an â€œamicable agreementâ€, the academic programme will resume immediately.

Protesters had demanded an end to the Minimum Initial Payment (MIP) which students had to pay before coming to Rhodes and which was set at nearly half of both tuition and residence costs. Earlier last week, management had agreed to replace the MIP with a 10% registration fee.

Management also agreed to not victimise any student for their protest action, to decrease and standardise the levy paid by African international students, to not charge interest on outstanding student accounts where prior payment arrangements had been made and for Vice-Chancellor Dr Sizwe Mabizela to sign surety for academically deserving students who are financially struggling. They also agreed to the 0% increase in fees as per the national moratorium on fee increases announced by President Jacob Zuma on Friday.

Practical exams that were scheduled to be written this week (the Universityâ€™s official Swot Week) are being rescheduled and the University has agreed to make supplementary exams available to all students and to foot the bill for the registration fee for that exam.

Although negotiations with Rhodes management initially broke down and only resumed after Zumaâ€™s announcement, this is a clear victory for students at this institution.

Student protesters marked the end of the shutdown with a candlelit vigil on Sunday night, which included a non-denominational prayer and a performance by the Rhodes choir. Donations were collected during the vigil for the victims of the xenophobic violence currently gripping Grahamstown East.

At the vigil, the Black Student Movement (BSM) – which is the organisation behind most of the student protests at Rhodes this year and which organised the shutdown on this campus along with student political party organisations, the National Shutdown Collective and many non-aligned students – laid out their plans going forward.

Lihle Ngcobozi, a spokesperson for the BSM and the originator of the #RhodesSoWhite hashtag, warned those gathered to be aware of the privileged position they are in as Rhodes students. â€œ[Rhodes] management has bent to the demands of the students. However, the national government has failed. The national shutdown continues,â€ she said in a speech at the end of the vigil.

â€œWe will continue to stand in solidarity. We will continue to protest on this campus because of our right to assemble,â€ she said. Ngcobozi also asked students to please be forgiving towards students who continued to protest during the examination period: â€œEvery single day as you write your exams, be aware that others are going to be shot down by the police.â€

Beyond these promises of continued solidarity protests, the battle at Rhodes seems, at least for now, to be over. Unlike institutions like UCT and Wits where protests continue, Rhodes does not outsource any of its labour beyond supplementing its existing cohort of Campus Protection Unit guards with staff from security company Hi-Tec.

Rhodes management has shown itself, relatively speaking, to be willing to negotiate in good faith with students. Mabizela himself was often at the barricades or marches, though largely to negotiate with police and ensure that they did not interfere with the studentsâ€™ right to protest.

For now, the Rhodes campus is quiet.