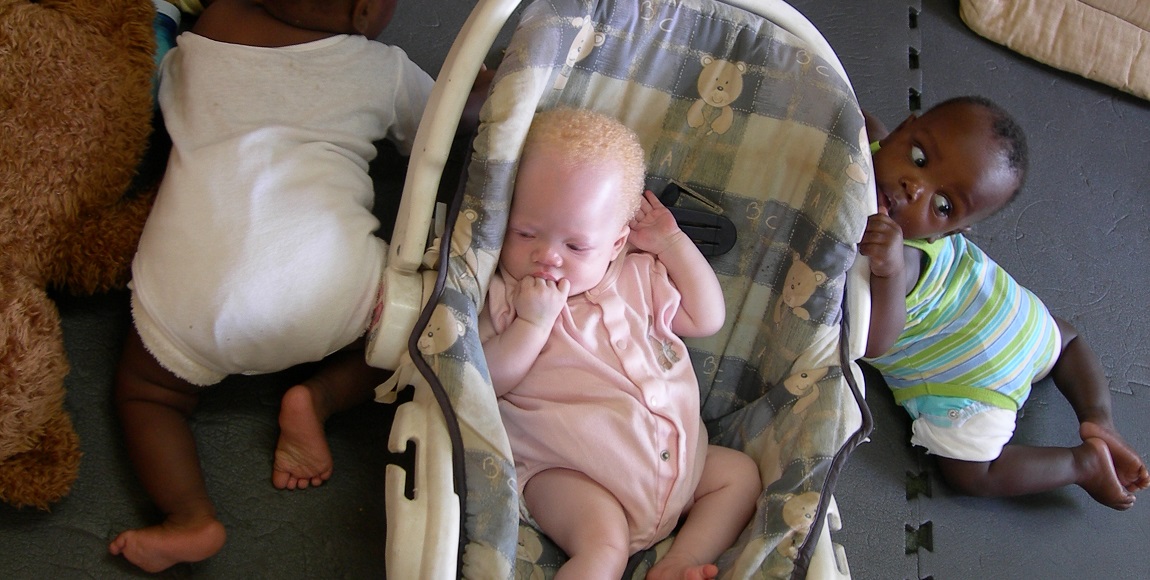 Mpho Tjope (33) resigned from his corporate job to dedicate himself as an albinism awareness activist. He says South Africa needs to do more to prevent killings of people with albinism. He spoke to The Daily Vox about his work, travelling the country and educating rural communities about albinism. A few years ago there were no attacks on people with albinism in southern Africa. Most of the attacks were happening in the north, like in Tanzania. Recently in Malawi, there are more attacks.

There’s a myth going around that people with albinism have luck, and if you kill them you will be able to use their body parts as muti for stronger potions that will get you money. We cannot talk about albinism [killings] and not talk about the fact that the economy plays a role in this. If you are desperate and someone says that if you kill a person with albinism you will get money, then for survival another person will just go and kill the person.

If you look at Johannesburg, it’s more tolerant to people with albinism, maybe because there are different cultures. But if you go to the likes of Kwazulu Natal (KZN), North West, and Limpopo, a person with albinism is not understood and they feel rejected. I had an encounter with a lady who told me that she was thinking of committing suicide because of the treatment that she is getting. So this kind of roadshow does help in a sense that it helps others feel that they’re not alone. It is so important and close to my heart that I go to communities and I relay such information to them.

There are organisations which cater to people with albinism. However you’ll find that if you are in the Northern Cape, where I grew up, you don’t get access to ASSA [the Albinism Society of South Africa]. I only heard of it once I had finished matric. Such drives are important but when you say you are catering for people with albinism, you can’t just look at their skin, as in just give them sunscreens and hat. There are psychological needs that I don’t think many are aware of or are addressing.

When growing up, the problem was people just not understanding the condition. When you were approaching, they would spit on the ground. Apparently it’s to prevent you from having a kid with albinism. I was in Kimberley two months back. After presenting, I had people ask me questions and you hear weird questions that show that people do need education about this.

I have a project that I’m hoping to get sponsorship for, where I go to communities and explain albinism and hear what people are saying about it. I’ve approached government departments and mostly they are silent. I would call them and be sent from pillar to post. If we have kids that are growing up to hate us then the best way is to speak at schools. I sent proposals to the department of education and I got no answer. You donâ€™t find someone who is actually taking responsibility. Iâ€™ve also sent proposals to [the departments of] social development, and arts and culture. Some directors havenâ€™t replied and some have. I feel that they think there are problems that are more serious than this one.

I would send proposals to companies to ask them to assist here so that we can actually educate the communities. I sent proposals to the likes of Toyota asking them if they could sponsor me with a vehicle. They said, “No, it is not part of our social responsibility.” This also speaks to the fact that they are not even aware of how serious this matter is.

So that’s the attitude I get from government officials and private companies.

As we speak, people are just minding their own business. I’m sure that maybe that’s what happened in Malawi. A few people were complaining but the officials and companies were not taking it seriously.

Right now this is happening in KZN. Nobody is doing anything about it. I’m sure that until it goes to other provinces in South Africa, then we will start saying we should do something about it.

As told to Nolwandle Zondi, edited for brevity and clarity