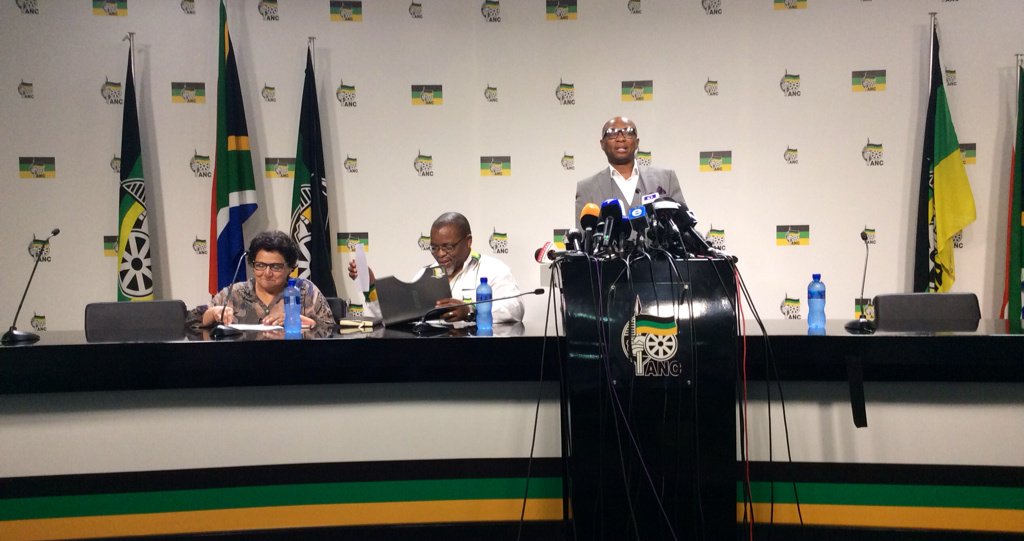 On Tuesday night, those signed up to the ANCâ€™s media mailing list received a surprise in their inboxes – the minutes of the ANCâ€™s National Working Committee (NWC) meeting that took place earlier that evening. The ANC released a statement saying that the email was sent out in error and does not reflect the views of the ANC. But considering that the contents of Wednesdayâ€™s press briefing were almost identical to the â€˜leakedâ€™ minutes, it seems that the original email is legitimate.

But was it propaganda sent out intentionally to make the ANC look good, or did a disgruntled member leak it intentionally to discredit the organisation? Mohammed Jameel Abdulla and Nolwandle Zondi couldnâ€™t quite agree.

Whoever clicked on â€˜Add allâ€™ in the contacts list wanted to show that the ANC is tightly closing rank around Zuma and clamping down on dissent instead of addressing the issues at hand. Officials were expected to apologise for the â€œdisplay of disunityâ€, accused of using the Constitution â€œwhere it suits themâ€, and required to â€œexplain your ill disciplineâ€. The ANC minutes are quite clear about disciplining the members who it says â€œmisbehavedâ€ and condemns the behaviour of the SACP and Cosatu.

Iâ€™d venture that the ANC member who leaked the minutes has probably had enough of the partyâ€™s spineless response to its leaderâ€™s behaviour. Instead of addressing the fact that the list of newly-minted ministers and deputy ministers put forward by Zuma was â€œdeveloped elsewhereâ€, the ANC has been occupied with addressing its â€œtolerance to deviant behaviourâ€ and â€œentrenching authority to leadâ€.

By leaking the minutes, the peeved comrade showed us that the ANC is working on discrediting the resurgence of the #ZumaMustFall movement, which the ANC describes as â€œdeadâ€. The party seems to believe that it is the internal divisions surfacing in public that makes it weaker and not the unconstitutional actions of its president.

It seems to me that whoever leaked the minutes was fed up with victim mentality and the continued denialism of the party, which described whatâ€™s being said about it in the media as â€œcharacter assassinationâ€.

By hitting â€œAdd allâ€, the malcontent member is telling us that the ANC is so beholden to its leader that it would much rather question the â€œunfortunate actionsâ€ of its own Integrity Commission, than question the integrity of the president.

Clearly, the frustrated member of the party wants us to see that the ANC sincerely believes that calls for social mobilisation are â€œintendingâ€ to weaken the party. No, ANC. We donâ€™t intend to weaken you. We want you to realise that it is this man that you are defending who is weakening you.

The way I figure it is that the ANC leadership are in a position right now where their public relations and legitimacy with their own constituency are severely damaged. In almost every sector of society, thereâ€™s not only mistrust in the president but in those connected to him. What better way to provide a counter-narrative to this than by â€˜leakingâ€™ what went on in the NWC? Yes, weâ€™re delving into conspiracy here, but a simple look at the minutes shows that leaking it only serves the ANC.

The minutes provide a narrative of the ANC pursuing increased stability within its structures while still showing that its top leaders, particularly President Zuma, still hold authority within the party. The dissenting voices who spoke out against him publicly, including Deputy President Cyril Ramaphosa, are shown to have been instructed to give a public apology.

The minutes also show that the party is open to consultation and differing views, which signals to party members that the media narrative of President Zuma axing those who disagree with him is disingenuous. As the minutes read, â€œExercise patience of different views, synthesise them to emerge what could be best way forward.â€

The overall message is one of unity, confidence, positivity and concern for the poor. As much as we may assume that this was discussed, itâ€™s also quite the flowery discussion, one that seems more appropriate for press statements or a national address. There are no indications of fear, reservation or dissent – something youâ€™d expect if there really was â€œconsultation and differing viewsâ€. It seems as though the minutes have been whitewashed.

While painting this romanticised image of the ANCâ€™s ideals, it also casts a distinct image of the kinds of forces working against it. It frames dissent as attempts to destabilise the ANC and casts the actions of disgruntled members as contesting for power in preparation for the 2017 National Conference.

Most importantly, the minutes includes the reiteration of the ANCâ€™s dedication to radical economic transformation by citing the problems in SA as being a class struggle that would exist even without President Zuma – despite there being no planned change in financial policy to address this rhetoric.

The reader is left with a somewhat critical, but intensely convenient narrative of what went on in the meeting and what the ANCâ€™s top six discuss in private.

Even if we assume the allegations of President Zumaâ€™s capture by the Guptas are unfounded, are we to assume that there was no discussion on how to address the narrative surrounding them? Sounds fishy to me.

There are enough reasons to suggest that the minutes were leaked deliberately by the ANC as a political tactic and PR stunt in order to foster trust within its constituency, paint the leadership in a good light and cast suspicion on those who oppose it.