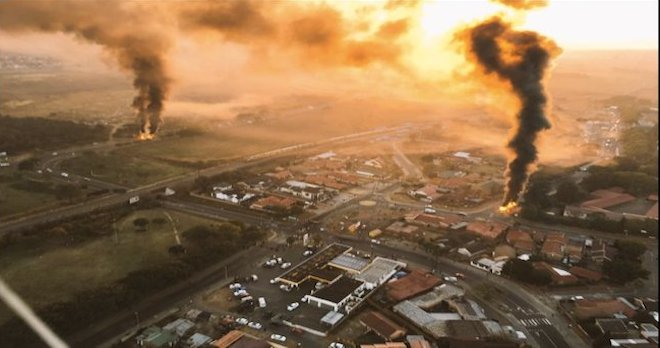 The violence that has accompanied protests related to the upcoming local elections has often emerged from situations in which citizens, and in most cases, ANC members, feel like their voices are not heard by the higher-ups. Granted, these protests are sometimes hijacked by opportunistic criminals, but focussing on the violence alone, without looking at what drove people to protest in the first place, kind of misses the point. Why isÂ the ANC not listening to its own members?

Violence erupted in Tshwane on Monday afternoon after it was announced that Thoko Didiza would be the ANCâ€™s mayoral candidate for the upcoming local elections. Residents of various townships in and around Tshwane are protesting against Didizaâ€™s candidacy as they are demanding that the current mayor, Kgosientso Ramokgopa be allowed to run again for mayor of Tshwane during the local elections taking place in August this year.Â This comes on the back of the killing of an ANC member during the press conference where the ANC candidates were announced.

News24 reported that Didiza might have been chosen as a compromise candidate, someone who would stand above the competing ANC factions that exist in Tshwane, because she is not originally from Tshwane. The mayoral candidacy before the announcement of Didiza was reportedly between the current mayor, Ramokgopa and ANC Tshwane deputy chairperson Mapiti Matsena. However, neither was chosen and instead Durban-born Didiza was picked. Â Didizaâ€™s appointment as mayoral candidate is also reportedly because the ANC have realised that they need to do whatever it takes in order secure the biggest metros in the country.

#TshwaneUnrest “We can’t have some woman from Kwazulucome and rule us. For what?,” asks one #Atteridgeville resident.

However despite the competency that Didiza clearly displays, the residents are firmly against her appointment as they feel she has been imposed upon them.

Residents here say the will vote for another party if the #ANC doesn’t revoke its decision. They are chanting Didizamustfall #TshwaneUnrest

The now-outgoing mayor of Tshwane, Ramokgopa called for calm on Tuesday morning, saying that all the ANC members were behind Didizaâ€™s candidacy and that he wanted to continue serving the ANC in the capital. Despite the ANCâ€™S claims that the protestors are not ANC members and they are in fact criminals, they have also called on ANC members to accept the nomination of Didiza for mayor. The South African government has also condemned the violence taking place in Tshwane.

#TshwaneUnrest government has condemned all forms of violence. BB pic.twitter.com/5f5huXTqXJ

2. Then there were the ANCâ€™s candidate lists

On June 6 in KwaMashu, Springfield and Newlands in Durban North roads were closed, vehicles set alight and shops damaged in protests by unhappy residents.

According to some protesters in KwaMashu, their nominated candidate was not featured on the ANCâ€™s candidate lists. â€œWe just want to choose the best candidates to lead us; we donâ€™t want people who are only in the race to enrich themselves and their friends,â€ said Sea Cow Lake resident Sandile Magatyane (29). According to The Mercury, Â infighting in the ANC in Kwazulu Natal has seen an unprecedented number of candidates decide to run for election independently from the party, with one ANC member saying there is a crisis in leadership.

On June 14, ANC members protested at the ANC regional office in Port Elizabeth. They claimed that the candidate lists had been tampered with, and the names of some people who won enough votes to be placed on the lists, were displaced.Â

The protesters even held some of the regional task team and provincial executive committee members hostage at the regional office, because they demanded answers for the names on the list. The issue was taken to Calata House in King Williams Town for the Eastern Cape ANC to deal with. The secretary of ANC Eastern Cape, Oscar Mabuyane said that the ANC will not allow things like this to happen, meaning other members being held hostage.

The ANCâ€™s refusal to listen to its constituency has taken many forms over this election season. One of these is the burning of over 20 schools and the damaging of four others in Vuwani, Limpopo, in protests.

The protests began when the Municipal Demarcation Board (MDB), the body responsible for determining municipal boundaries, decided in July 2015 to incorporate Vuwani into the new Malamulele municipality instead of the Makhadu council.

In voicing their dissatisfaction with the demarcation, residents began burning schools. It spread throughout the province as 50 schools in Limpopo, including the 20 in Vuwani, were vandalised or burnt. Vuwani was even declared a disaster zone.

A provincial task team was put together to deal with the dissatisfaction, which included the police, religious leaders and MECs. But yet again they met behind closed doors, without discussing it with the residents, to try and suppress the hostility.

Clearly, residents did not want to be incorporated into the new municipality, but the only way they can overturn the decision is if they take up the matter with a court of law. When speaking to Cape Talk, Jane Thupana, the chairperson of the Demarcation Board, said that consultation had taken place before the decision was made. Â The MDB says that they used media, including radio, to invite residents to raise opposition about the new demarcation and that they also scheduled meetings in community halls. Although, it does not seem that these processes reached the right people in Vuwani or dealt with the issues that would raise concerns about the merger.

And the wonder of it all: An ANC councillor was among those arrested for the violence in Vuwani.

They must decide,are the angry people ANC members or just “opportunistic elements who are not members” as said by SG https://t.co/i905GkKbp3