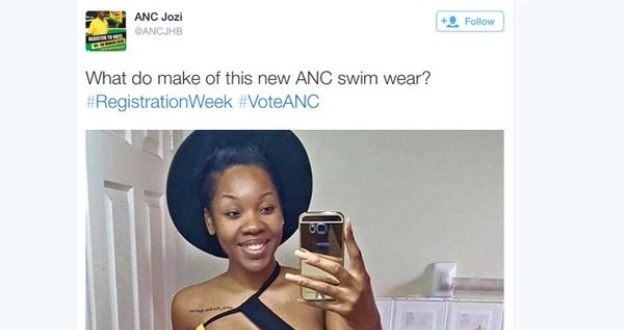 On Wednesday morning, a picture of a woman wearing a skimpy bikini in ANC colours was posted on the @ANCJHB Twitter page. The tweet was deleted, but not before people went full woke on it. THE DAILY VOX rounds up some of the fallout.

The tweet was posted at 08:30 in the morning and was later deleted from the account, with an apology.

But you know how fast these tweeps can type, right?

@ANCJHB Your continued lack of respect for women is incredible. They’re our sisters, not campaigning tools for leering old men. Wow!

Some thought that instead of the image objectifying women, people were just hating on the costume’s “swag.â€

Y’all are haters. This cozzie is swag ? http://t.co/55WCzztqsz

@ANCJHB don’t feel ashamed, that is African beauty. It’s a pity we are in election mode and things gets politicized

It’s not yet clear whether those are meant to be the colours of the ANC’s flag… or Jamaica’s.

This woman is Jamaican. Saw her on Instagram http://t.co/4rFl2Ybqsq

We have a lot of questions. How did something like this find its way onto a social media account that is linked to the ruling party in the first place? Will the ANC give us the Mbaks treatment and say they were hacked? How is this not objectification? And where oh where is the ANC Women’s League?