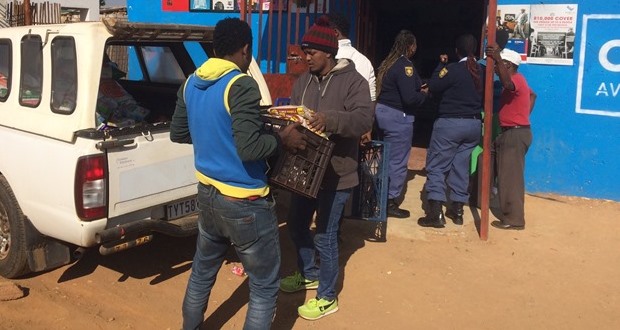 On Wednesday, The Daily Sun published an interview with Mandla Matikinya, who claims to be chairperson of the ANC Youth League (ANCYL)Â Mawika Zone branch, Tshwane. In it, he expresses how the ANCYL is unhappy with the nomination of Thoko Didiza, and that it’s better for foreign-owned shops to be looted rather than schools or churches being burnt.

Reporter: Earlier on you were saying it’s okay for people to loot as long as they loot foreign owned shops. Why do you think that’s okay?
Mandla: It’s okay because we can’t go to break schools and churches or our own shops. We are blocking the streets and break Somalians or foreigners’ spaza shop.
Reporter: Why, how is that going to help you?
Mandla: The national level, they will see the youth league they are not happy. Not youth league of DA or EFF – ANC Youth League. ANC Youth League in the Mawika zone. As we are ANC from Mawika zone we are fighting, we don’t want Thoko Didiza

In another video posted on Facebook, an Ethiopian man is seen crying hysterically after his shop was looted in Ga-rankuwa.

On Tuesday, State Security minister David Mahlobo admitted that it was ANC members whoÂ â€œwho were not satisfied with the processesâ€ in nominating Thoko Didiza as mayoral candidate, who started the protests. But is Mapiti Matsena, deputy chairperson of the ANC in Tshwane still sticking to his guns that ANC members are not involved in the violence?

Those people burning tyres and such can't do these things in our name. We distance ourselves from those individuals – Cde Matsena.

It’s clear that confusion is reigning within the ruling party, and, again, it is immigrants paying the price.

Videos via The Daily SunÂ and Somalis in South Africa on Facebook.