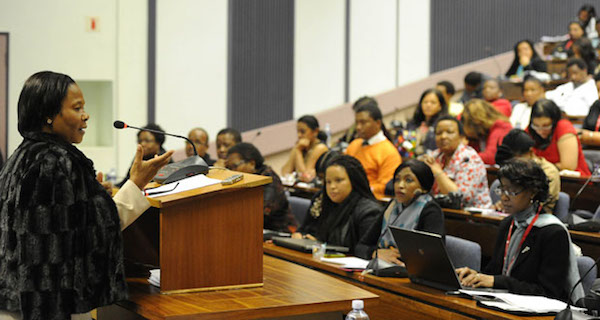 One a scale of one to patriarchal, how far back is the Ministry of Women setting South African women?

Last week Womenâ€™s Minister Susan Shabangu (she of mining and Marikana fame) announced that the theme of this yearâ€™s 16 days of activism for women and children campaign would focus on getting men and boys to stand up against violence.

How the minister failed to note the patriarchal tone of her comments defies belief but gender activists in attendance werenâ€™t about to let her get away with it.

Nandi Msezani from the Ecumenical Service for Socio-Economic Transformation told the minister: “We need to be aware of the language used as it comes from a very patriarchal standpoint. Men need to protect us? With language such as this, women are being infantilised and moving the women’s movement backwards.”

The minister reportedly also nodded along as subsequent speakers called for women to be submissive to their husbands, described feminism as un-African, and called for government to cut funding for centres dedicated to assisting abused women and children, all of which may leave you wondering if the honourable Shabangu knows anything at all about feminism.

Now gender equality groups, including People Opposing Women Abuse, Tshwaranang Legal Advocacy Centre and Sonke Gender Justice, have started a petition demanding that Shabangu and her department commit to resuming the process to devise a national strategic plan for dealing with gender based violence, which has been stalling for years.

â€œWe â€¦ call on all sectors of South African society to challenge this neo-patriarchal framing, and to demand a plan from government,â€ they said in a statement.

Like her lame duck predecessor Lulu â€œThis is immoralâ€ Xingwana, Shabangu hasnâ€™t done much to champion womenâ€™s rights or achievements since her appointment as minister of women. Sheâ€™s apparently had lots of time to deputise for President Jacob Zuma and head up an anti-corruption initiative, however.

Minister Shabangu, when will the ministry of women be about women?