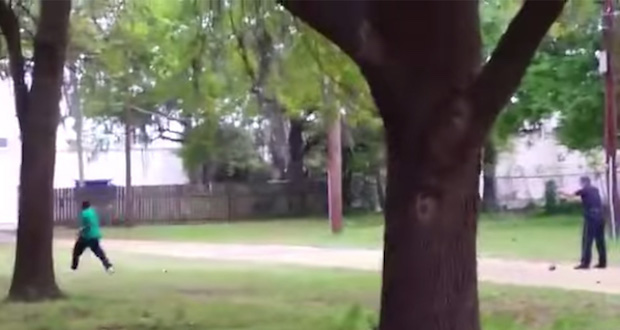 A white police officer has been charged with the murder of an unarmed black man, Walter Scott, in North Charleston, South Carolina, after a video of the shooting surfaced.

Without the video the officer, Michael Thomas Slager, would never have been charged with murder. The original police report on the shooting claimed that Slager had shot 50-year-old Scott in self-defense, after Scott had attempted to take Slagerâ€™s taser. But the police report was a lie, and it took a video of the brutal killing, released to the New York Times by the Scott family lawyer, Chris Stewart, to prove it.

On April 4, a routine traffic stop over a broken taillight went devastatingly wrong. In the video, Scott runs away from Slager, who then shoots him eight times as he flees. Three bullets hit his back, one struck him in the ear and another struck his left buttock. According to the New York Times, one bullet pierced his heart.

In the aftermath of the shooting, Slager handcuffed Scott while he is lay face-down in the grass, and then proceeds to drop an object â€“ believed to be the taser â€“ near Scottâ€™s body.

No CPR was administered by Slager or other officers who arrived minutes later. Scott was pronounced dead on scene.

The shooting follows the public backlash against police brutality in the US after the deaths of several young and unarmed black men, including Eric Garner (43), John Crawford (22), Michael Brown (18) and Tamar Rice (12) at the hands of white police officers.

Garner, Crawford and Brownâ€™s killers were never indicted. Rice, who had been playing alone in the park with a plastic gun when police charged in and shot him, was recently found by the City of Cleveland to have been â€œdirectly and proximatelyâ€ responsible for his own death.

Slager was charged with murder on Tuesday.

Watch the graphic footage below and read the full story on The New York Times.

– Featured image: Screenshot from the video released to the New York Times.