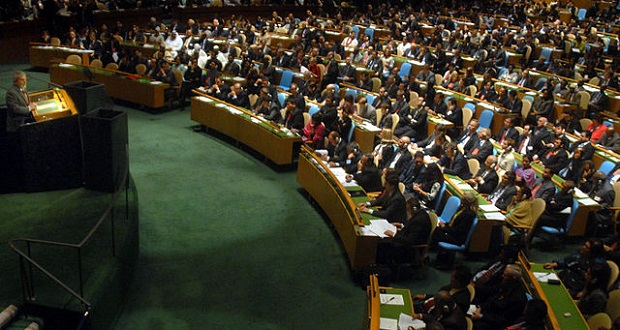 The United Nations has been under a lot of pressure to begin instituting reforms, one of which was in the form of the first ever public debate of candidates for the UNSG position that was broadcastÂ live on Al Jazeera earlier this year. There were also public hearings with the General Assembly where candidates presented their vision and responded to questions that were put to them by the Member States.

All this talk surrounding the new Secretary General makes us wonder what their actual job is.

What is the job description of the Secretary General?

Officially, the job description of the UNSG is to be the chief administrative officer of the United Nations. They have to act according to a mandate which is given to them by the Security Council, General Assembly, and other UN organs. The Secretary General also has the responsibility to bring to the attention of the Council and other actors any matters of international importance.

Kenneth Diole, a student working with the South African Institute for International Affairs (SAIIA), likened the role of the SG to the chief executive of a company: â€œThey are someone who basically oversees the work of the various agencies of the United Nations as well as being a mediator in various organisations. The UN cannot actually do anything in conflicts, such as what is taking place in Sudan. They can bring the international community to the table for discussions about what actions to take.â€

Desiree Kosciulek, a SAIIA programme manager, said that the SG can bring to the attention of the UN Security Council any matters relating to peace and security. â€œAn important thing to remember when looking at the UN is that it only as strong as its member states make it be. The SG also does not have unilateral power because they are not presidents and prime ministers, and that is why they do not use those type of terms.â€

How exactly is the Secretary General elected?

The Secretary General â€œshall be appointed by the General Assembly upon the recommendation of the Security Council,â€ traditionally through a General Assembly resolution. However the five permanent members of the Security Council have veto power, meaning any of the P5 (United States of America, Russia, China, France and the United Kingdom) may exercise their veto if they are not happy with the decision. One of the P5 elected to vote â€œno opinionâ€ when the time came to elect the new UNSG, but used their veto power.

Is the UN trying to facilitate reform?

A lecturer at the International Relations department at the University of Witwatersrand, Natalie ZÃ¤hringer, said that what the Al Jazeera debate did was create more awareness about the UN. It is important that the public is involved in the process and takes ownership of the process. But the public aspect of the interviews wonâ€™t have entirely influenced the decision to appoint Guterres. â€œIf a candidate is portrayed as unsuitable it will be much more difficult for the Security Council to justify their decision even though the decision will still be made very much behind closed doors,â€ she said.

Several grassroots movements had come together under the banner 1 for 7 Billion to call for the United Nations to start an open, free and inclusive selection process for the new Secretary General and to choose the best possible candidate for the position. On their website, they have listed the many things they want changed in the UN, such as the control of the process by the powerful and the lack of transparency and accountability.

What qualifications do the candidates need?

So who won the election?

Even though it was largely hoped that the new Secretary General would be a woman or from an Eastern European country, Portugalâ€™s AntÃ³nio Guterres will be taking over from Ban Ki-Moon in December. On the 13th of October 2016, he was formally appointed as the new Secretary General and sworn in to office on 12 December. He starts his first day on the job, officially, on 1 January 2017.

AntÃ³nio Guterres is deeply honoured by trust & confidence placed in him & determined to be guided by principles & purposes of UN Charter. pic.twitter.com/DA44bjdTyG

Who is AntÃ³nio Guterres?

The new Secretary General-designate has had quite a prolific career before getting elected to the highest position in the UN. The 67-year-old was the Prime Minister of Portugal from 1995 until 2002. He then took over the reins as the United Nations High Commissioner for Refugees in 2005 until 2015. Under this leadership the activities of the High Commissioner tripled.

GuterresÂ is expected to bring so of his experience and values from his role as the High Commissioner for Refugees into his new position. These include a respect for human rights and peace.

Despite the encouraging signs of reform within the UN, there is still some scepticism and pessimism about the relevance of the organisation. There has been an increase in human crises in the past ten years and the UN has not been able to do much about this. AntÃ³nio Guterres has a difficult job to take over, especially as the crisis in Syria worsens and considering his predecessorâ€™s failure to bring an end to the conflict.

Guterres himselfÂ has said that the future of the UN lies with reform and innovation: â€œThe future of the UN will be determined by its readiness to change and adapt.â€ and he has also pledged â€œunwavering commitment to transparency, accountability and oversight,â€ which includes â€œimposing the highest ethical standards on everyone serving under the UN flag.â€

So as we move into this supposed new age of the UN with a new Secretary General, we can only hope that he brings some much-needed change with him.