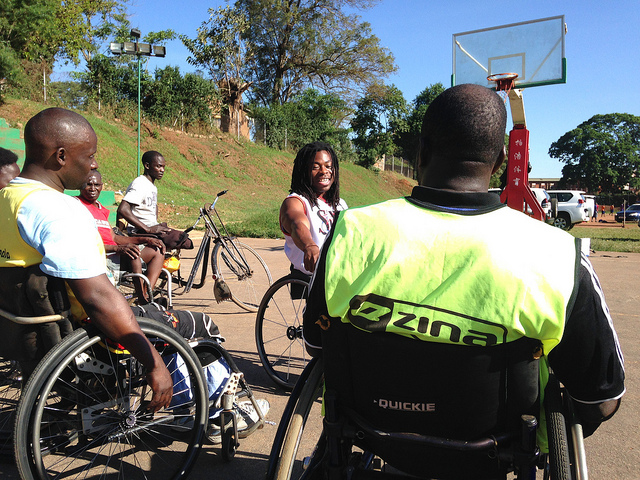 People with disabilities are one of the most vulnerable groups in the world. There is an inherent stigma that is attached to this segment of the population with either sensory, motor or cognitive disabilities. And this discrimination comes above the race- and gender-based oppression faced by South Africans everyday. MUHAMMAD ZAKARIA SULEMAN asks whether there is a place for vulnerable groups in South African society.

People who do not understand, or appreciate, the circumstances of people with disabilities generally see them as bad omens, or a reflection of their status in their community.

This often occurs in rural areas where there are cultural and traditional stigmas that dog the lives of disabled people. In urban areas, people with disabilities are generally seen as ill, subject to welfare and discrimination. Thus, children with any impairment are generally hidden, unspoken of and not given the adequate attention.

In areas like the northern districts of KwaZulu Natal, where some of the highest levels of disability are found, hundreds of learners are on waiting lists to get into three or four special needs schools (and these are only primary schools). Learners wait for years on end, mostly becoming too old to be admitted into school, and left to non-existent adult basic education and skills development programmes. The 500 ordinary schools in the area do not have any accommodation for these learners and the schools that cater for special needs are severely understaffed, lack basic special needs materials and in many cases lack adequate infrastructure. Learners who trudge their way up to grade seven find nowhere else to go as there are no secondary schools.

They are stuck in this system.

At a time when parties are actively engaging communities, drafting policies to win over voters in cleverly constructed manifestos, very rarely is the protection and promotion of minority groups’ rights, such as people with disabilities, mentioned. This could be because it is taken for granted that their rights are constitutionally entrenched. But, it is more of a possibility that this group is completely forgotten in the discourse? Either way, what is a right, without the will to realise it? And what is the level of equality in our country, when one of the most vulnerable groups are not being equally protected? Parties who are serious about fighting inequality and transforming society must look at all levels of society – including those we have completely forgotten.

People with disabilities are constitutionally entitled to the free and full enjoyment of and protection of the law. This means that the Constitution promotes a society where everyone is equally entitled to the benefits of the law, benefits and entitlements of the Constitution –everyone – including vulnerable groups. Everyone has a right to healthcare services, basic education, housing, social assistance, all within its prescribed limitations. Added to this framework are international instruments such as the UN Convention on the Rights of People with Disabilities that calls for a socially inclusive and individual-based approach to the realisation of the rights of people with disabilities. All these mechanisms are geared towards a democratic and substantively equal society we ideally live in.

Using education as an example, Minister of Basic Education Angie Motshekga announced last year that in 2013/14 inclusive education would be prioritised: TheWhite Paper 6 on Inclusive Education was published in 2001 and has since been docked in Parliament. While 553 ordinary schools have been converted to full service inclusive schools, there are, according to the Department of Women, Children and People with Disabilities only 63 special needs school in the country offering Matric, while 97% of over 25 000 â€˜ordinaryâ€™ schools are not wheelchair-friendly. The initial drafts of the Norms and Standards from the Department of Education did not include provisions for learners with special needs education until it was amended.

Over the past 20 years, there has been some improvement in the lives of people with disabilities, but the difference predominantly lies with those who can afford basic services.

Muhammad Zakaria Suleman (@ArbstrakZak) is a researcher at SECTION27. His areas of research include disability rights, food insecurity, constitutional education and access to healthcare services.