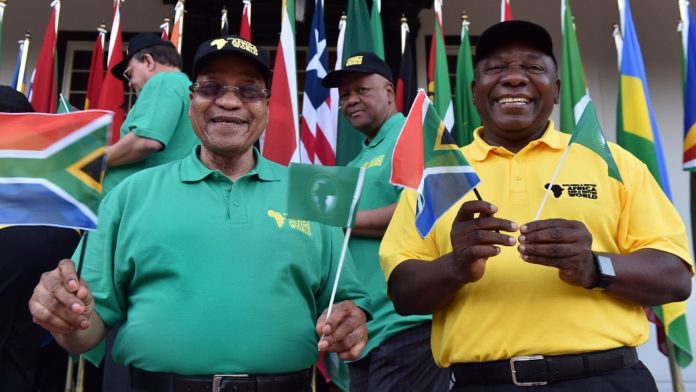 The current trajectory of South Africa’s attempt to rebuild from the Zuma (plus the last 5 Mbeki) years, will eventually force our generation to ask a question that is inevitable. A question that will inadvertently test our own resolve to the building a country we believe in. When the time comes, and it will, each one of us will be asked: “Are we willing to send our parents to jail,” writes REKGOTSOFETSE CHIKANE.

I don’t mean parents in the sense of blood or some form of a familial tie. I mean parents as a guiding individual or community who have assisted in your growth from being a child to eventually reaching adulthood. For some, it might be the traditionally gendered interpretation of a father or mother or it could be sibling or friend. The role these individuals play in our lives is pivotal in understanding what it means to not only survive this world but learn how to live in it as well.

Our parents, to me at least, are the individuals who sold us the dream of the rainbow nation. The dream of something better after the end of apartheid. They are the generation who hopefully, with their help, will guide us along a path that will allow us to prosper enough to become a parent to someone else down the line. Our parents are the generation that lived within and possibly fought against the apartheid regime, but more importantly, created the foundational cornerstones for what a post-1994 South Africa should be.

They built upon these cornerstones with their various imagined realities and when put together, created the South Africa we live in now. A South Africa which is undoubtedly better than its past iterations, but also flawed because of the desire to combine what are often contradictory imaginings. This, non-perfect state, is honestly all that my generation has. If we want to make it better, we need to save it from our parents. Who, for all their well wishes, have become the most significant threat to our future.

Our parents have allowed for the perpetuation of a society that is unsustainable. A society suffering from chronic levels of income inequality and unemployment to systemic forms of poverty and gender-based violence. Our South Africa, though far removed from its apartheid past, remains equally entangled in it due to many of the decisions that our parents have made. Decisions that are sometimes unconscious and others that are deliberate.

Now it would be grossly unjust, to state that all our parents should be sent to jail. However, due consideration should be made for parents who have willfully engaged in the entrenchment of democratic South Africa’s entanglement with our apartheid past and its unsustainable present. For these individuals, there is a duty on the shoulders of my generation to preserve our future by judging those, who threaten it, harshly. However, the difficulty in achieving this also lies in our inability to determine who should be judged and what metric should be used to judge them. How does one get to the conclusion that one of our parents has willfully engaged in acts detrimental to our future?

Should my father, someone who has given his life to fighting for this country, be judged on the same merits as the farmer living in Orania? Should the CEO of a JSE listed company find commonplace with a beggar on the side of the road? Alternatively, should the mother of one living in Groot Constantia, be placed in the same group of judgement as the grandmother raising five grandchildren? We have, for a long time, never truly had a mechanism to measure complicity in the perpetuation of what is slowly failing country, until now.

Corruption has become the clearest indicator of those individuals who don’t care about the future of our country. As a result, it provides us with a way to determine someone’s complicity in entrenching the country’s current status quo. It’s not that corruption is unique to South Africa, but our form of corruption is, for lack of a better and appropriate term, dumb. It is the type of fraud characterised by individuals who when given R1 million contract to build a road, rather than stealing R100,000 and building a R900,000 road so that you can get the next deal. We steal R950,000 and build a R50,000 road hoping that it delivers to the citizens as if it was R1 million. Our seemingly corrupt politicians are incapable of even valuing themselves when involved in crooked dealings. Willing to take an extra R50,000 per month to let an R80 million fraudulent deal pass. The type of corruption that exists in South Africa threatens the future of this country but also gives us the best way to begin saving this country.

Are we willing to find our parents who are corrupt and send them to jail? The biggest for my generation is our response to State Capture. The notion that a collective of individuals has actively engaged in collaborated participated in or condoned the creation of a system of pillaging the state for personal benefit. The Zondo Commission into State Capture will force my generation to tackle the notion of corruption and corrupt parents head. However, are we willing to punish those found guilty?

The toughest challenge facing us over the next decade, is how we take on the subject of actively looking to send our parents to jail. To actively work towards their imprisonment for threatening our futures. Because if we are unable to take this stance now. Then what is the point of even trying to fight for this country? If we are unable to even fathom the idea of punishing those we consider our parents then how could we possibly believe we could change our society in the future. What would make us better than them when we eventually become the parents to the next generation. A generation who will ask fought for their future.

Rekgotsofetse Chikane (known as Kgotsi for those who are tongue-tied) is the author of “Breaking a Rainbow, Building a Nation: The Politics Behind the #MustFall Movements” and is a graduate of the University of Oxford, having completed his Master in Public Policy degree in 2017, a Mandela-Rhodes Scholar (2015), one of the Mail & Guardian’s Top 200 Young South Africans (2016) and the former national president of InkuluFreeheld, non-partisan, youth organisation focused on deepening democracy and enhancing social cohesion. He is adept at navigating a variety of South Africa’s socially complex spaces, often as the resident coconut, and has experienced some of the best and worst of the #MustFall protests. Chikane is an advocate for socio-economic equality and the practical realisation of decoloniality within a post-1994 South Africa through the use of emerging technologies.