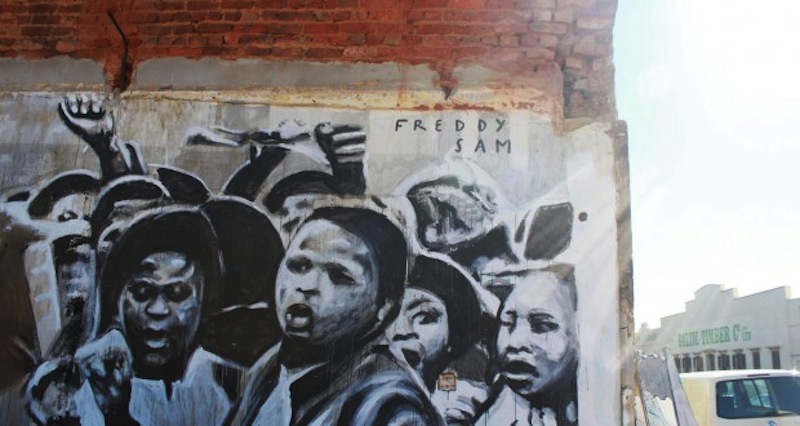 ARI SITAS, sociology professor at UCT, reflects on the events of June 1976 and what it meant to be a young person then.

I was involved in the Junction Avenue Theatre Company in Johannesburg which produced the play that made many of us famous in 1976: the Fantastical History of a Useless Man. We interrupted our workshops for the play during June and July trying to make sense of the insurrection that started from the cops shooting at demonstrating schoolchildren in Soweto. Junction Avenue was a product of some of the most vibrant years in apartheid’s twilight zone. After the applause of the first play ended, there remained this fantasy in me about a people’s theatre. But that is another story.

On June the 16th Astrid Von Kotze and I were acting as extras in a French movie which was being filmed somewhere at some posh club and we had to look interested for six boring and insufferable hours. We sensed that something was up because no black “extras” had arrived to “look interested” in the crowd scenes. We phoned our friend Jeanette Curtis who was banned but who was working at the Institute of Race Relations and she said, what are you doing there? The townships are burning, Wits is marching through Johannesburg and you are doing the Last Tango in Paris?

We rushed back to join the student demonstration on Jan Smuts Avenue after the police pinned people back on the Wits side of the road and trying to get in the way of skirmishes breaking out with Rand Afrikaans University students across the road. The demonstration had gathered hundreds of black workers as it marched through the city but they were hurrying back to make it to Soweto before dark. The police charged at us a couple of times. By the late afternoon things quietened down and students went back home mostly to white suburbia. There were only four black students at Wits in the Humanities then: the Momaniat brothers, someone from the Western Cape and someone from Alex township who proved to be a police plant.

At night we gathered at Jeanette Curtis’s apartment to compare notes- Alpheus Mthethwa, the secretary of the Metal and Allied Workers’ Union from Durban, was there and a range of other friends and activists (Janet Love, Barbara Hogan, Costas Joakimidis). That night we were quite sure that there would be no raid to catch her breaking her banning order by having friends around because the cops had other priorities. The main discussion was around how Inkatha would respond to all this ferment and whether Buthelezi was to side with the students’ demands or not.

It is important to remember that all this happened whilst Black Consciousness was growing like a wildfire on the Witwatersrand- it was both assertive and powerful. Its theatre groups abhorred the white mainstream and its venues- the discovery of African roots started from township-venues and church-halls. The values of the collective, the calls for a black renaissance, the explosive performances were more than exciting and challenging. I remember how powerful Wally Serote’s poetry felt then and how wonderful the Medu Group looked in its crude stage-craft.

The truth was that we were left out on a limb. We white folk were more about gesture and some very grating posturing. Saso severed our student links and BCM kept us at bay. There was fluidity of course, there were also great experiments, complex lifestyles, weird happenings, parties and lots of sex as many subcultures rubbed shoulders to start with. From a long perspective there was more pretension than substance and more pills, booze and dagga-tinged reveries than clarity of thought and more aggressive quotation than deed; my generation went around quoting the right stuff, reading the latest from Europe and arguing about African-ness and Frelimo.

It is sad how Biko’s legacy of self-reliance and his search for a black psychological revolution to overthrow the shackles of servitude and of course, the broader BC insistence on a black communalism in economic life have become rhetorical devices in cultural studies programmes.

June 1976 was a point of no return. The insurrection had started in earnest. The black youth that risked life and limb that shook the country up is in its late 50s or early 60s now. By the time the second generation of insurrections started in 1984, they were either in factories, shops or in the unemployment queues. They were the new generation of 30-year-olds that came to shape the destiny of Cosatu and Nactu among others. New generations were making the townships “ungovernable”.

We returned to our play: what started as an extravagant and caustic historical tour of South Africa’s political economy and white society’s ruthless exploitation of blacks from Van Riebeck to Rhodes and beyond ended up in seriousness. Our Useless Man became somber and a voice prefiguring revolution linking race and class: “There is going to be a war” was the beginning of his last monologue but he as a historical character at once a dreamer and a fool opted to become the revolution’s least obstruction.

The applause was heartening.

This was the last time Junction Avenue was to remain a white ensemble. Ari Sitas is a writer, a sociologist and an activist. He works at the University of Cape Town.