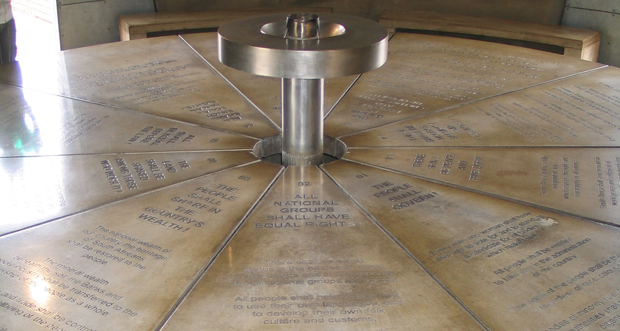 ARI SITAS, a sociology professor at the University of Cape Town and chair of the National Institute for the Humanities and Social Sciences board, delivered the keynote address at the institutesâ€™s conference on â€œour liberation struggle: the treasures of collective memoryâ€ over the weekend. Sitasâ€™ address focuses on the Freedom Charter and transformation at universities. We publish an excerpt below.

The heritage of struggle and thinking we are marking today and tomorrow should humble us. As Mazisi Kunene intoned in his poetry collection The Ancestors and the Sacred Mountain, we should never forget that we are not driftwood and that we come from a long way back. And that we should bequeath to all future generations, he insisted, â€œthe dream of the festivalâ€.

As the National Institute for the Humanities and the Social Sciences we have to work hard to decipher the kind of human flourishing that such a festival demands. And we have to do it through some tetchy times because even though we are rooted, the flood waters are strong. As an institute furthermore, that deals with the knowledge projects of the higher-education system, what we have to deal with is a simple sentence (from the Freedom Charter) and a complex obligation.

The sentence: â€œThe doors of learning and culture shall be opened.â€ We have been focusing on doors and we do know what doors look like, which ones were shut and which were bolted, which have been prized open and which ones opened and which ones are slightly ajar. We have talked of such doors since the Apartheid Universities Act of 1959. We know a lot about doors, but we alas know very little about what learning is.

Donâ€™t get me wrong. Our higher-education institutions are awash with learning experts. Without exception some senior manager, a deputy vice-chancellor or a deputy to the deputy vice-chancellor is tasked with teaching and learning and hundreds of educational specialists, curriculum advisers, people who can measure the deficit of our students and the trappings of our lecturers , but very few would be able to tell us what a post-Apartheid learning experience our heritage implies, what should our knowledge project be and what its content might be beyond the obvious criticism that most of the current one is quiteâ€¦ Eurocentric.

So after the doors have been opened and indeed our buildings were re-designed to have no doors, what is inside might be highly problematic.

Since 1994 we have been at least conscious of the imperative of relevance. We have read Bertold Brechtâ€™s lines where he faces the students of postwar East Germany and brings out the challenge:

Relevance has haunted us throughout the years and there have been two versions of it: a narrow and a broader instrumental version.

There is the narrow instrumental injunction that insists that the â€œfor whatâ€ is answered by producing cheerful robots for the market or students who look good as attachments or extensions of an iPhone. We can even have special tutorials of how to manipulate all the iPhoneâ€™s functions, but do we have the capacity to make the iPhones or to create the next means of human communication?

Then there is the broader relevance based on a moral instrumentalism: that we produce students who can help transform the conditions that have created the triple crisis: inequality, poverty and unemployment.

We can do that, it is a moral imperative, but do we have the capacity to envision what this transformation might be?Â Learning, even at the instrumental level demands of us to go beyond ourselves. We need to open up the doors towards a postcolonial and post-Apartheid future.

To get to the dream of the festival, as Antjie Krog said, â€œWe need to dream deep with our earsâ€.

We tried to address the challenge through the process Sarah Mosoetsa and I were tasked: to develop a charter for the future of the humanities and the social sciences. We tried to elicit as many ideas as possible from our own academics and from international networks of scholarship. We listened deep with our ears!

After speaking to more than a thousand people all over the country we tried to synthesise or to dream deep with what our ears what needed to be solved to create a post-Apartheid sense of a deep democracy. In asking what kind of humanities and social sciences were appropriate, we disturbed too many hornet nests and stirred up too many ghosts that were thought to have gone away.

This has taken us in remarkable directions: we cannot moan that we are in a space on the southern tip of Africa and we do not know where we have come from or who we are. The story can never start with 1652.

We needed to do something about that. We needed to recover what voices, talents, traditions, actions and visions the successive regimes of direct and indirect rule, segregation and apartheid, stifled and ignored. We needed to open up pathways to other lands on this continent, across the Indian and Atlantic Oceans, we needed to relearn mapping and geography; we needed to think about what alternatives we have at hand to the deep social challenges that confront us. We needed to know our students better.

Most importantly we needed to return to the Big Ideas, the kind of ideas that will animate the current and future generations of students. The university system has lost such ideas (some cynics would say we never had one) and now we stand naked: on the one hand Cecil John Clones using a liberal defence to defend illiberal practices, that is, to use the constitution against its ethos and make themselves the civilisational custodians of excellence; on the other, angry black students (in the main) who want Cecil John Clones to fall. They read Fanon and Biko and get stuck, because the Big Ideas are not there, they are not allowed to proliferate. Even though the students might not have the answers, they are asking serious questions.

Can the Freedom Charter be part of the contemporary Big Ideas? There are seven injunctions that follow the statement of â€œthe doors of learning and culture shall be openedâ€: firstly, the discovery, development and encouragement of local talent, for the â€œenhancement of our cultural lifeâ€. Let us bring the language to the 21st century, â€œenhancement of cultural lifeâ€ should read â€œhuman flourishingâ€. It means that our universities ought to prioritise â€œhuman flourishingâ€ and create the context for the big debates of what such flourishing might be. And then what constrains the realisation of it? And then what it means to remove such constraints so that what has to be done, is done. It means that we have to move from Apartheidâ€™s big idea of human and population control and racial mastery to freedom.

The second injunction is about an openness to the world â€“ which means an openness to all, to the world within our borders, to the world that we encounter over there, its ideas, its people and their dignities. In the world of knowledge there are no foreigners, no refugee tents or camps; there ought to be room for all, intoned Cesaire in the rendezvous or meeting point of victory. What we are trying to do with our African Pathways Programmes and the Brics projects in the institute is precisely that and relate as equals with all in an equal world.

The third, admittedly clumsily crafted in its reference to â€œhuman brotherhoodâ€ speaks to the aims of education: to teach our youth to love and to honour â€“ to love their people and their culture, to obviously have their culture inhabiting their worlds, their languages, their idioms, their ancestral lines, their music, their everything and to be able to love the good and understand the bad. And then, to honour freedom, peace and human solidarity.

The fourth all the way to the seventh injunctions get more technical and speak of scholarships for all, combating adult illiteracy and the removal of all colour bars. It even promises teachersâ€™ rights!

There is no doubt that in marking the Freedom Charter today we agree that it is part of the Big Idea. The substantive morality that underpins it is not there yet. At the moment what we have achieved is a formal reciprocity in the country: by this I mean that we are all not contented with what others, the other, the white, the black, the coloured, the man, the woman say or do, but thanks to need and greed we are ready to accept the scaffolding that holds this country together. It is formal because it has a constitution, laws, rules and modalities of governance.

Learning is the search for that substantive morality that should hold us together, in freedom and not in fear, in substantive equality and not in formal decree. The Freedom Charter, despite our desperate effort to charter all our freedoms recently, is a critical starting point in that learning process. Is it the entire odea? No, we need to think deeper through it. It is an important prop that attempted in 1955 to list ideas that would help us achieve a balance between freedom and equality. That balance evades us and the social challenges are many and the â€œfestivalâ€ hard to imagine.

So the institute, with the help of valuable partners like Liliesleaf, shall facilitate the opening and the dismantling of many doors of learning; we will concern ourselves with relevance in all its forms; we will aspire to help our tertiary institutions think through the challenges of freedom and equality and we will learn in the way, through many mistakes, as we make learning a priority.

We are dismantling after all, the worldâ€™s last racial autocracy in a harsh context where racism is on the ascendance everywhere, where an undeclared civil war is conducted against women, where more than 51-million people live in refugee tents as we speak and where dozen of workers who make the bits that make up our iPhones have been committing suicide.

But we persevere because we are not driftwood, we come from long way back and the thinking that makes another world possible is within our grasp. Ari Sitas is a sociology professor at the University of Cape Town and the chair of the National Institute for the Humanities and the Social Sciences.Â