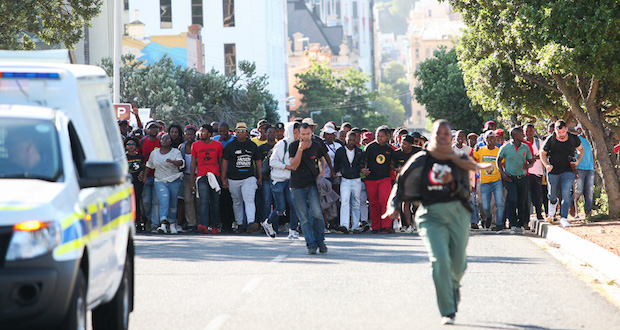 Campuses of the Cape Peninsula University of Technology (CPUT) were on high alert on Monday after reported vandalism of exam venues at the Bellville campus and the arrest of 43 students following an altercation with police and private security guards, TARRYN DE KOCK reports.

SAPS spokesperson Captain FC van Wyk, told the Daily Vox that the students had been arrested on charges of malicious damage to property and contravening the Gatherings Act. The students are set to appear at the Bellville Magistrateâ€™s Court on Tuesday.

The university had earlier cancelled exams after examination venues were vandalised Sunday night. Exams at the Bellville campus have been postponed until further notice. The university also said it would no longer be providing transport from the Cape Town campus to exam venues, as this posed a security risk.

CPUT staff had expected to return to work Monday with the promise of greater security to allow them to continue their work, but campuses remained tense and many staff did not remain on site.

A staff member at the Cape Town campus, who asked not to be named, said that she had tried to access one of the faculty buildings on Monday but was told to leave by protestors, as no work or exams would be allowed to take place. There was also minimal staff presence at the Mowbray campus.

The CPUT Fees Must Fall movement released a statement on Sunday, sayingÂ management had failed to implement decisions reached by the university council concerning the way forward.

Shutting down libraries, computer labs and other academic facilities hindered students’ ability to prepare adequately for exams, they said. They also questioned the confusion caused by evicting students last week and only releasing the revised exam timetable after many students had left campus.

The movement saidÂ that until a satisfactory solution was found to the issue of exams and the resolutions decided by council, “nothing is going to move”.